Proposed State of Illinois Pension Contributions to Increase by $288.8 Million in FY2017

The State of Illinois’ contributions to its five pension funds will rise by $288.8 million to $7.8 billion in the next budget year, according to preliminary estimates by the retirement systems.

The proposed 3.8% increase will add to the State’s budgetary pressures in the year that begins on July 1, 2016. However, the increase is considerably below the prior year’s increase of $682.0 million, or 9.9%, which was mainly due to reductions in the assumed investment rates of return by the three largest pension funds. 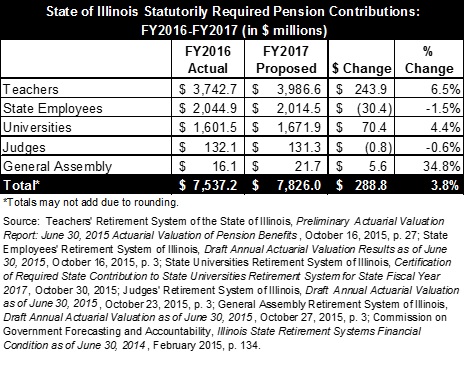 More than 85% of total pension contributions come from the State’s general operating accounts, with the remainder paid from other State funds. General Funds contributions in FY2017 would be about $6.9 billion in FY2017, compared to approximately $6.6 billion in FY2016. Despite the lack of a State budget for FY2016, pension payments must be made due to continuing appropriation requirements. As discussed here, the Illinois Comptroller’s Office said it was delaying pension payments in November and possibly December but that contributions would be made in full by the end of FY2016.

Illinois’ pension contributions are expected to increase each year under the State’s 50-year funding plan (Public Act 88-0593) that began in FY1996. After a 15-year phase-in period, the law requires the State to contribute a level percentage of payroll sufficient to bring the retirement systems’ funded ratios to 90% by FY2045. A funded ratio shows the percentage of accrued pension liability covered by pension assets.

TRS trustees did change certain assumptions based on actual experience during the three years that ended on June 30, 2014. Projected mortality rates were lowered, which increased the cost of benefits that must be paid out over time. Projected salary increases were also reduced, which lowered projected costs over the long term but increased required State contributions in the near term. Since State contributions are calculated as a level percentage of payroll, contributions must be higher in earlier years to offset lower payroll growth in later years.

The proposed contribution to GARS, the smallest State fund, increases by $5.6 million, or 34.8%, to $21.7 million. The increase relates to a new assumption that half of potential future members will choose not to join the system, resulting in a lower future payroll base.

The State’s funding plan and subsequently enacted changes defer a large portion of the required State contributions to later years and have been insufficient to prevent growth in the unfunded liability. Illinois pension funds have consistently ranked as the worst funded among all the states, including in a recent survey by Bloomberg. 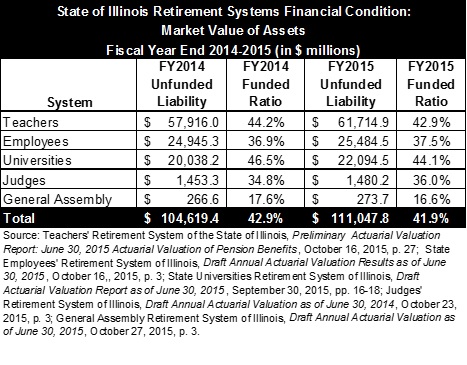 Since FY2009, State law has required that the actuarial value of assets be based on asset smoothing, in which unexpected gains or losses in any fiscal year are recognized over five fiscal years. Market value valuations are more volatile than actuarial valuations but provide a more realistic view of the systems’ actual financial position at the time of measurement.

As shown in the following table, the combined funded ratio on a smoothed basis increased to 40.9% at the end of FY2015 from 39.3% at the end of FY2014, and the total unfunded liability increased slightly to $112.9 billion from $111.2 billion. Smoothed asset values continued to reflect investment returns in prior years that exceeded expectations. 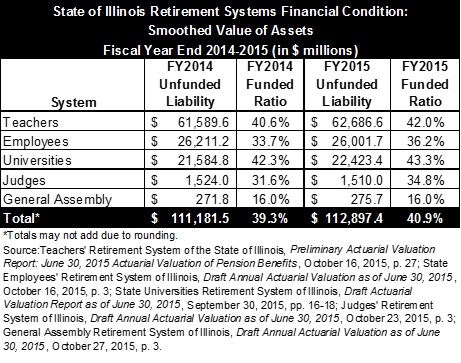 To comply with a new accounting standard for public pension funds, most of the State retirement systems have adopted formal funding policies that differ from the Illinois funding plan. These funding policies under Governmental Accounting Standards Board Statement No. 67 are used to calculate what is known as the Actuarially Determined Contribution (ADC), which is designed to reflect more standard actuarial practices.