Last week the Civic Federation marked the end of the FY2013 budget season with a blog that summarized the proposed budgets for the nine local governments the Federation monitors. These governments include: the City Colleges of Chicago, Chicago Public Schools (CPS), DuPage County, City of Chicago, Cook County, Chicago Transit Authority (CTA), Forest Preserve District of Cook County, Metropolitan Water Reclamation District of Greater Chicago (MWRD) and Chicago Park District. This blog focuses on the recommendations made by the Federation to improve the fiscal health of each government.

While the Federation evaluated each local government’s budget and fiscal health status individually[1], there are three specific problems that many of the governments we analyze share. These include the declining health of their employee pension funds, a lack of adequate fund balance reserved for contingencies and future financial difficulties. The Civic Federation therefore makes similar recommendations to multiple governments to address these issues. These recommendations include:

In May 2012, Mayor Rahm Emanuel offered a plan to reform pensions for employees of the City of Chicago, Chicago Public Schools and Chicago Park District during a hearing of the Illinois House of Representatives Personnel and Pensions Committee. The Civic Federation supports the proposal, which provides a strong outline of a comprehensive, balanced solution that includes shared sacrifice by retirees, current employees and eventually taxpayers. The proposed reforms include four main elements to reduce the City’s $20 billion unfunded liability for the City’s four pension funds, Chicago Teacher’s Pension Fund and Park District Pension Fund:

1. Temporary suspension of the annual automatic annuity increase for current retirees: The current 3% compounded annual increase would be suspended for ten years, after which a simple interest annual increase would be implemented;
2. Increase in employee contributions: Employee contributions would increase by 1% each year for five years. Current employee contribution rates range from 8.5% (Laborers and Municipal Funds) to 9.125% (Fire);
3. Increase in the retirement age by five years: According to testimony by Chief Financial Officer Lois Scott, the increased retirement age would include a ten-year phase-in plan to mitigate the effect of the reforms on those currently close to retirement age; and
4. 401(k)-type Retirement Option: More choices would be provided to allow newer employees the flexibility to take accrued benefits with them if they leave City employment.

Though the Federation supports the Mayor’s plan, further details are needed on how each of the provisions of the plan would be phased in, their financial impact in terms of cost savings and what the governments’ contributions will be going forward. This data should be made available to the public and could be modeled on Cook County’s pension website, www.OpenPensions.org, which was created by Cook County Commissioner Bridget Gainer.

The Civic Federation is encouraged by the data provided on Commissioner Gainer’s OpenPensions.org website and commends the initiative’s recommendations for pension reform. The recommendations are as follows:

• Reduce benefit multiplier from 2.4% to 2.2%;
• Increase final average salary to the highest consecutive eight years in the last 10 years of service;
• Reduce cost-of-living adjustment to simple 3% or half the Consumer Price Index, whichever is lower;
• Increase employee contributions by 1.0%; and
• Lower vesting time period from ten years to five years.

The FY2011 audited financial statements for the local governments include a modification in fund balance reporting, as recommended by the Governmental Accounting Standards Board (GASB). GASB Statement No. 54 shifts the focus of fund balance reporting from the availability of fund resources for budgeting purposes to the “extent to which the government is bound to honor constraints on the specific purposes for which amounts in the fund can be spent.”[2] In the interest of government transparency, the Civic Federation recommends, when possible, that all local governments provide ten years of fiscal data in the GASB Statement No. 54 format in the statistical section of their audited financial statements. A multi-year trend analysis of the fund balance levels for each of the local governments was not possible this year because the data has been classified differently with the implementation of changes to GASB Statement No. 54. For instance, the Chicago Park District previously reported the Long-Term Income Reserve and Northerly Island Funds as special revenue funds; however, with the implementation of GASB Statement No. 54, these funds are now reported as part of the General Fund. Therefore, a restatement of prior years’ fiscal data according to the new categorization of the District’s funds is warranted in order to conduct a thorough trend analysis.

Having a healthy level of budgetary reserves is imperative to managing risk effectively. For example, the Civic Federation is disappointed that in FY2013 the City is borrowing approximately $78.4 million to pay for a tort settlement that is essentially an operating cost, ultimately costing taxpayers an estimated $201.4 million.[4] Because the City wasn’t appropriately building budgetary reserves that would have allowed it to make a one-time payment rather than borrow to finance the settlement, the cost of the City’s actions has been compounded for the taxpayers. For more details on this issue see the Federation’s analysis of the City’s FY2013 proposed budget.

It is important for governments to disclose forecasts to help stakeholders understand what their future financial situations will be and set a framework for future budgets and plans. This can be accomplished through the development and implementation of a formal long-term financial plan that is shared with and reviewed by key policymakers and stakeholders. This plan must also include concrete action steps to address the government’s long-term fiscal balance.

This year the Civic Federation supports the Chicago Park District’s FY2013 proposed budget particularly for its multi-year plan to reduce its structural deficit. However, the Federation is concerned that the District may offset some of its efforts with its continued reliance on one-time revenues to cover operating expenses. For this reason, the Federation urges the District to implement a formal long-term financial planning process to identify future fiscal challenges and develop strategies to address them.

The National Advisory Council on State and Local Budgeting (NACSLB) and the GFOA both recommend that all governments formally adopt a long-term financial plan as a key component of a sound budget process.[5] A long-term financial plan typically includes the following components:
• A review of historical financial and programmatic trends;
• Multi-year projections of revenues, expenditures and debt;
• An analysis of those multi-year trends and projections; and
• Modeling of options to address problems and opportunities, which helps governments address fiscal challenges before they become fiscal crises.

A key component of financial planning is engaging all stakeholders in the process of developing the plan. The GFOA describes long-term financial planning as “not just a staff-driven process. It is consensus-driven and inclusive, involving elected officials, staff and the public.”[6] Among other benefits, involving all stakeholders can help staff refine forecasts, institutionalize planning processes and promote strategic decision-making.

For governments undertaking a new long-term financial planning process, we recommend proceeding in four stages: Stage 1: Fiscal and programmatic goals and priorities should be articulated through public input;
Stage 2: The long-term financial plan should evaluate financial and service data in order to determine how to accomplish the goals and priorities. It should include a review of the government’s financial policies, a financial condition analysis that presents ten years of historical trend information, multi-year financial forecasts, a reserve analysis, an evaluation of debt and capital obligations and a series of action recommendations;
Stage 3: The insights derived from the long-term financial plan should directly inform the development of a balanced budget that is fiscally sustainable each year; and
Stage 4: The plan should then be regularly monitored to ensure its viability by means of regular financial reports. 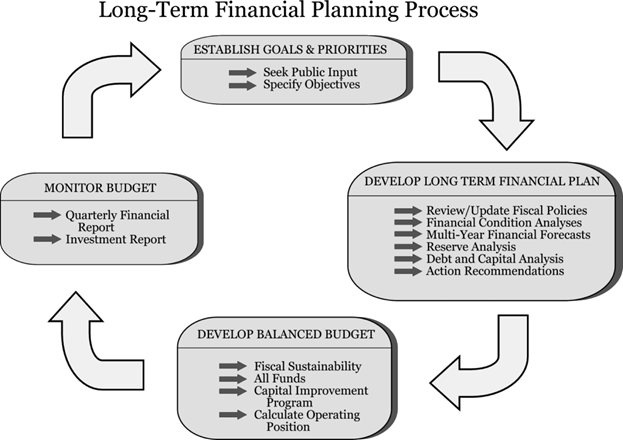 If a government chooses not to undertake a full long-term financial planning process, then at a minimum an annual document should be developed and published that would include:
1. A description of financial policies, service level targets and financial goals. Each policy should be reviewed using relevant forecasting data to determine if the policy is being followed, if the policy should be amended and if new policies should be added;
2. A scorecard or rating of the financial indicators as part of the financial analysis that assesses whether the trend is favorable, warrants caution, is a warning sign of potential problems or is unfavorable;
3. Possible strategies, actions and scenarios needed to address financial imbalances and other long-term issues. For example, a discussion of the long-term implications of continuing or ending existing programs or adding new ones. These actions should include information on fiscal impact and ease of implementation; and
4. Sufficient stakeholder input including holding a public hearing for decision makers and the public to provide meaningful input on a long-term financial strategy to address the government’s financial challenges.

All nine local government budget analyses, including full recommendations, for FY2013 can be downloaded from the Civic Federation website.