Last week marked the end of the budget season for the nine local governments monitored by the Civic Federation. These governments include: the City Colleges of Chicago, Chicago Public Schools (CPS), DuPage County, City of Chicago, Cook County, Chicago Transit Authority (CTA), Forest Preserve District of Cook County, Metropolitan Water Reclamation District of Greater Chicago (MWRD) and Chicago Park District. This blog provides a summary the proposed FY2013 budgets and how appropriations have changed from the prior year. Included is a chart that provides an overview of the Civic Federation’s findings and positions on each of the local government budgets.

Three governments will raise their tax levies to capture revenue from expiring and/or terminated TIF districts. This maneuver, which has been used by the City of Chicago for the past two years and by Cook County and the Chicago Park District this year, allows the governments to capture property tax revenues from expiring and terminated TIF districts without increasing the amount of money taxpayers will owe in property taxes. This is because taxpayers were previously paying the additional amounts for TIF district expenses, which are not reported in the operating budgets, and now will pay the same amounts as part of the property tax levy, which is reported in the budgets. The City of Chicago is raising its levy by $3.3 million, Cook County is raising its levy by $4.5 million and the Chicago Park District is raising its levy by $1.1 million.

Major findings in changes from prior year budget appropriations include:

The exhibit below provides a summary of the budget analysis reports published by the Civic Federation following the release of each local government’s FY2013 proposed budget. The summary chart provides:

It should be noted that the figures below represent the data available at the time the Civic Federation’s analysis of each budget was published; appropriations and other financial data may have changed since the release of each report. Also, the Civic Federation’s individual analyses for some aspects of a government’s budget may not be comparable to the analyses of other governments, and therefore may not be included in the summary exhibit. Full analysis reports can be accessed at civicfed.org. For a full PDF of the following charts, click here. 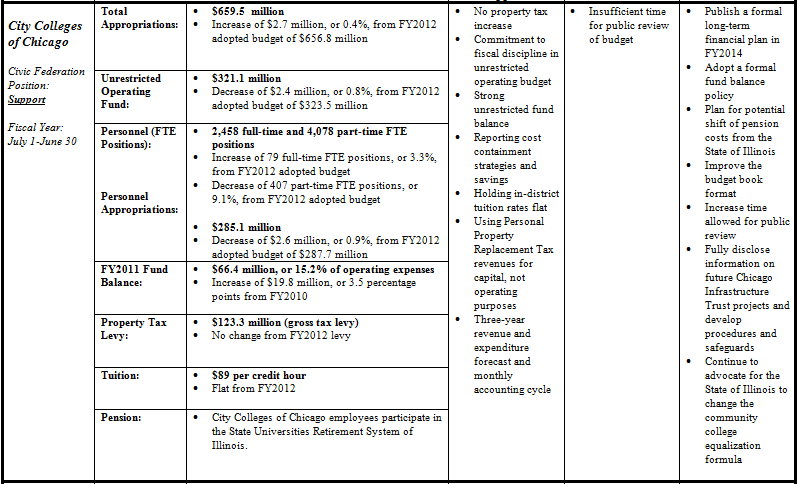 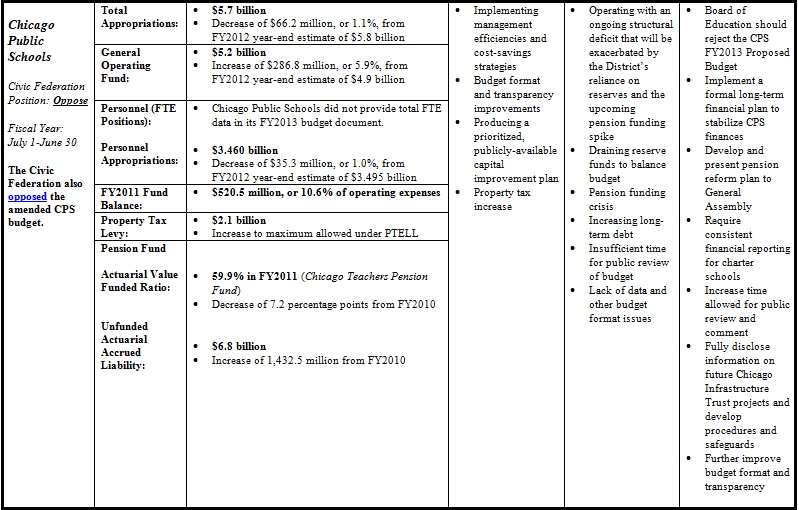 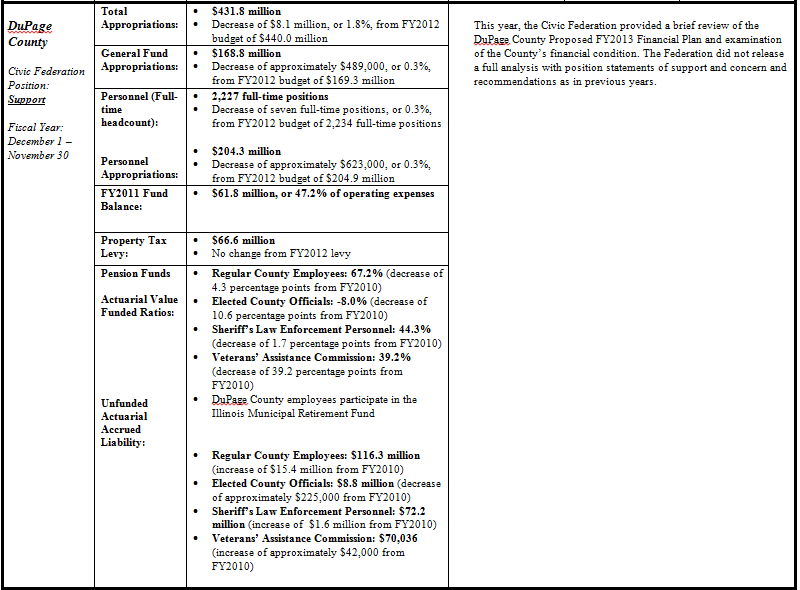 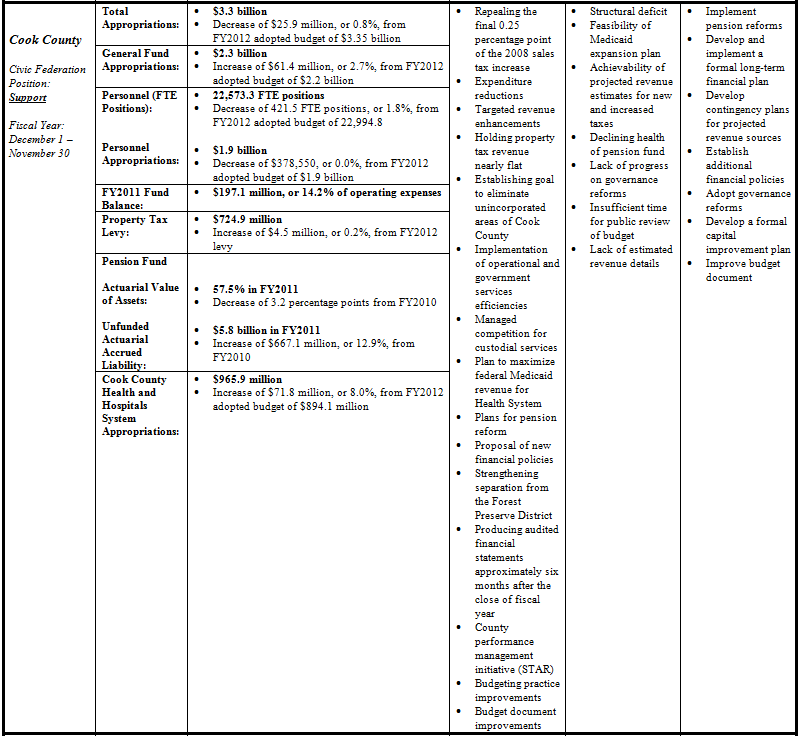 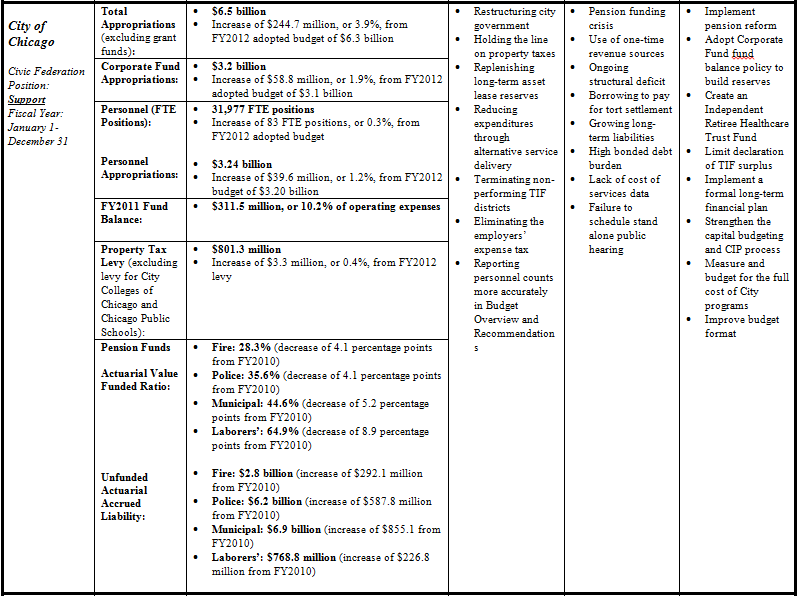 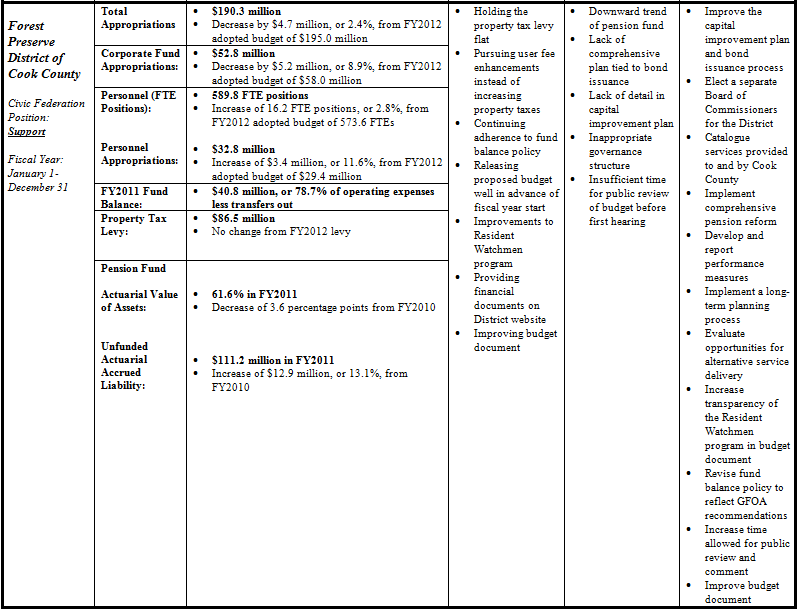 [1] Chicago Public Schools did not provide total position data in its FY2013 budget documents.
[2] The Chicago Transit Authority does not provide personnel appropriation data.
[3] The Civic Federation does not conduct an analysis of fund balance for the Chicago Transit Authority.
[4] The City Colleges of Chicago employees participate in the State Universities Retirement System of Illinois and DuPage County Employees participate in the Illinois Municipal Retirement Fund.