In order to address sometimes inconsistent application of reporting standards for fund balance by governments, the Governmental Accounting Standards Board (GASB) issued GASB Statement No. 54: Fund Balance Reporting and Governmental Fund Type Definitions in February 2009. GASB Statement No. 54 shifts the focus of fund balance reporting from the availability of fund resources for budgeting purposes to the “extent to which the government is bound to honor constraints on the specific purposes for which amounts in the fund can be spent.”[1] GASB required that governments implement the new reporting standards with their FY2011 financial statements, meaning the first statements incorporating the reporting changes are starting to be released by local governments in the Chicago area, starting with governments with a July through June fiscal year. Chicago Public Schools recently released their FY2011 Comprehensive Annual Financial Report with GASB No. 54 modifications.

Fund balance is a term commonly used to describe the net assets of a governmental fund and serves as a measure of financial resources.[2]

· Committed fund balance – net fund resources with self-imposed limitations set at the highest level of decision-making which remain binding unless removed by the same action used to create the limitation.

· Unassigned fund balance – in the General Fund, the remaining surplus of net resources after funds have been identified in the four categories above.[4] 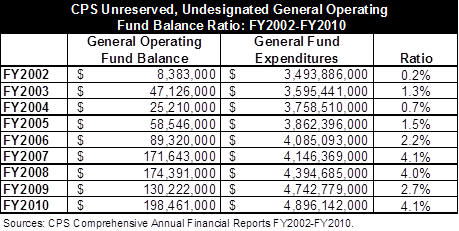 The following chart presents unrestricted fund balance for FY2011. In this exhibit, the District’s net resources including self-imposed constraints, amount to $520.5 million or 10.6% of general fund expenditures. These resources include those assigned for educational services ($289.0 million), for appropriated fund balance ($181.3 million) and for encumbrances ($44.9 million). The unassigned portion of fund balance – the District’s net resources without constraints, self or externally imposed – amount to approximately $5.3 million, or 0.1% of general fund expenditures.[8]

A ten-year trend analysis of the District’s fund balance ratio including the most recent FY2011 numbers is not possible because the data has been classified differently with implementation of GASB No. 54. In the interest of government transparency, the Civic Federation recommends that all local governments, including the Chicago Public Schools, provide 10 years of fiscal data in the GASB No. 54 format in the statistical section of their audited financial statements. Only with reclassified data can an accurate trend analysis be conducted.