What are the Rhode Island Pension Reforms?

Public officials and opinion leaders in Illinois have expressed much interest in the landmark pension reforms approved in Rhode Island in 2011. Chicago Mayor Rahm Emanuel remarked recently that Illinois should look at reforms similar to those enacted in Rhode Island. Cook County Commissioner Bridget Gainer named her pension report after Rhode Island General Treasurer Gina Raimondo’s influential analysis of the pension crisis in that state. This begs the question: what exactly did tiny Rhode Island (population one million) do to reform its pensions?

A pension system anywhere in the nation is a complicated matter, involving innumerable moving parts and masses of different provisions and caveats. Additionally, any pension reforms that are challenged in court will be interpreted based on states’ different constitutional provisions, statutes and case law. This can make it difficult to compare pension plans between states because reforms that are legal and possible in one state may not be in another. However, it is useful to understand the ideas behind other states’ reforms.

The State of Illinois is often cited as having the worst-funded pensions in the nation, but Rhode Island has also long been at the bottom of national rankings such as those by the Pew Center on the States.

The Employees’ Retirement System of Rhode Island (ERSRI) is a defined benefit pension plan for state employees and teachers. ERSRI additionally administers and invests the assets of the Municipal Employees’ Retirement System, the State Police Retirement Benefits Trust and the Judicial Retirement Benefits Trust.[1] All assets are comingled for investment purposes, though their actuarial valuations are determined separately. The numbers cited in this post do not incorporate the other state-administered plans or municipal plans outside of ERSRI.

According to Rhode Island General Treasurer Gina Raimondo’s[4] “Truth in Numbers” report, the state’s pension deficit is due to several factors, including lower employer contributions to the fund than the actuarial needs. This is a problem that Illinois also faces.[5] Rhode Island began making actuarially-determined contributions in 1986, but has not consistently held to that standard. Other contributing factors were benefit improvements without corresponding increases to taxpayer or employee contributions in the 1960s, 1970s and 1980s and insufficient investment returns. These are also contributing factors in the Illinois unfunded liability.

In addition to growing unfunded liabilities, Treasurer Raimondo identified another unsustainable feature of Rhode Island pensions—the required taxpayer-funded employer contribution to ERSRI would double between 2010 and 2013 from $303 million to $615 million, crowding out funding for state services such as education. It was this finding that particularly catalyzed the 2011 pension reform effort in Rhode Island. In Illinois General Funds pension-related expenses of $5.7 billion will consume 19.3% of state-source General Funds revenue in FY2012, a percentage that is projected to grow to 22% in FY2013 and over 25% by FY2015.[6]

Treasurer Raimondo crafted a framework for reform that she contended would make the pensions secure for employees and affordable for taxpayers over the long-term. Her plan focused on changes that would reduce the unfunded liability by altering benefits for current employees and retirees. She partnered with Rhode Island Governor Lincoln Chafee and the General Assembly to promote the reforms and introduce legislation. Called the Rhode Island Retirement Security Act of 2011 (RIRSA), the legislation was approved by large margins in the legislature and signed into law in November 2011. RIRSA remains, thus far, the most comprehensive pension reform implemented by any state, according to Fitch Ratings.

It is important to note that in Rhode Island, state employees and about half of teachers are enrolled in Social Security, which means that they will not rely solely on their state pension benefits for retirement income. In Illinois downstate and suburban teachers who are members of the state-funded Teachers’ Retirement System are not members of Social Security, though some state employees are. Whether employees have other sources of retirement income is a factor that pension reforms in any state must take into account.

The reforms described below allow existing employees to retain the benefits they have accrued as of the effective date of the legislation, July 1, 2012. Under a defined benefit pension system like the ones in Rhode Island and in Illinois, workers accrue retirement benefits based on a multiple of their years of service. The pension accrual rate multiplied by the number of years of service yields the percentage of final average salary a worker’s pension benefits will be based upon. For example, a 2% accrual rate applied to 30 years of service equals a 60% pension benefit. Before the 2011 pension reforms in Rhode Island, multipliers ranged from 1.6% to 3% per year of service.[7] Going forward, Rhode Island employees’ previously earned benefits will be frozen and they will accumulate benefits at a lower rate of 1% per year of service plus a defined contribution plan. 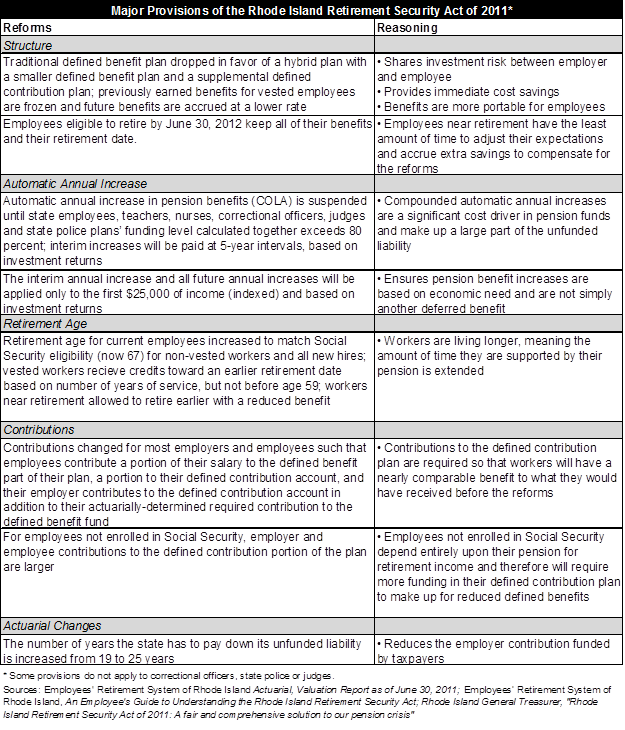 According to actuaries, the RIRSA reforms immediately reduced the state’s fiscal year 2010 unfunded liability by $2.7 billion and increased the funded ratio of the state employees’ pension fund to 59.8% and the teachers’ fund to 61.8%. The reforms are also projected to save taxpayers $4 billion over the next twenty years. While the reforms listed above will go into effect as scheduled on July 1, 2012, unions and their members in Rhode Island are expected to challenge RIRSA in court shortly thereafter. Unions cannot represent retirees in Rhode Island.

As previously discussed on this blog, a significant difference between Rhode Island and several other states, including Illinois, is that Rhode Island has no constitutional provision explicitly protecting pensions. Rhode Island courts have provided protection based on impairment of contractual principles. The Illinois Constitution (Article XIII, Section 5) states that membership in any pension system in the State is an enforceable contractual relationship and that members’ benefits “shall not be diminished or impaired.” However, there are several different legal positions on what this clause means for pension reform. Legal opinions have varied on whether the prohibition in the Illinois Constitution applies to non-vested benefits of current employees.[8] Thus, some proposed pension reforms in Illinois would reduce benefits going forward through statute, while others contend that future reductions to pensions can be negotiated between pension fund members and the State.[9]

The Rhode Island Supreme Court, four days after RIRSA was enacted, declined to review a ruling by a lower court on an earlier round of pension reforms that public employees had an implied contractual right to pension benefits. The Supreme Court’s action had the effect of referring the lawsuit on the earlier reforms back to the lower courts and could possibly influence how RIRSA may fare in future lawsuits. Supporters of RIRSA say that the lower court ruling only requires the state to have a good reason to break its implied contract with employees and retirees. This was the analysis that courts in Minnesota followed when they ruled that the legislature had the power to balance retirees’ interests and the greater good of the state by making the decision to temporarily suspend annual pension increases for retirees in order to stabilize the pension system. For more about how RIRSA was developed with federal law in mind, read this blog post by Governing’s Girard Miller.

Despite the uncertainty surrounding future court rulings, leaders in Rhode Island have moved on to their next big pension priority: local pension funds. Municipalities that were not members of ERSRI were not included in the sweeping 2011 reforms despite the fact that, as discussed on this blog, pensions are a large problem for some municipalities in Rhode Island. Pension liabilities were a central factor in the 2011 bankruptcy filing by the town of Central Falls. There are thirty-six locally administered pensions in 24 towns in Rhode Island, of which 24 are “at risk,” according to the Rhode Island Auditor General. The local plans have a collective unfunded liability of $2.1 billion and a funded ratio of just 40%. Their unfunded other post employment benefits liabilities (OPEB), which are mostly retiree healthcare, are $3.5 billion. Governor Chafee and Treasurer Raimondo are working on different initiatives to address the local pension crisis in Rhode Island.

[1] The Municipal Employees Retirement System (MERS) is locally funded, not state-funded. However, not all communities in Rhode Island are enrolled in MERS. Thirty-six local plans are not enrolled in MERS. http://www.oag.ri.gov/reports/MuniPensionsRI2011.pdf

[3] See the Pension Protection Act of 2006, Public Law 109-280, http://frwebgate.access.gpo.gov/cgi-bin/getdoc.cgi?dbname=109_cong_public_laws&docid=f:publ280.109.pdf. There is no official industry standard or best practice for an acceptable funded ratio for public pensions other than 100%.

[4] Treasurer Raimondo oversees state employee and teachers’ pensions in her position as Chairman of the Employees’ Retirement System of Rhode Island.

[5] See Commission on Government Forecasting and Accountability, A Report on the Appropriateness of the 90% Funding Target of Public Act 88-593, page 9 for a discussion of how insufficient employer contributions have been the single largest driver of the increase in the unfunded liabilities for the five Illinois pension funds since 1996.

[6] Civic Federation calculations based on data from Commission on Government Forecasting and Accountability, FY2012 Economic Forecast and Revenue Estimate and FY2011 Revenue Update, March 2012, pp. 7, 11; Illinois State FY1999 Budget p. 11-17; Commission on Government Forecasting and Accountability, A Report on the Financial Condition of the Illinois State Retirement Systems as of June 30, 2011, March 2012, pp. 95-100.