In the past two years, nine states have passed laws to reduce automatic annual increases in pension benefits for current retirees. The latest example is Rhode Island, which in November 2011 enacted legislation to suspend annual pension increases until the state’s retirement systems are more adequately funded.

The table below, based primarily on data from the National Conference of State Legislatures summarizes new laws related to annual pension increases.

The reductions in automatic annual increases for current retirees are part of a broader effort to overhaul state retirement systems in the face of growing pension obligations and strained operating budgets. More states, including Illinois, have enacted laws to reduce pension benefits for employees who will be hired in the future.

In April 2010, the State of Illinois enacted Public Act 96-0889, which created a two-tier benefit system with lower benefits for state and many local government employees hired on or after January 1, 2011. New employees receive annual increases of 3% or one-half of the annual increase in the Consumer Price Index, whichever is less; retirees and employees hired before January 1, 2011 receive automatic annual increases of 3%.  Benefits of new workers are increased by a simple interest rate, while benefits of retirees and existing employees grow more quickly because they receive compound-interest increases. 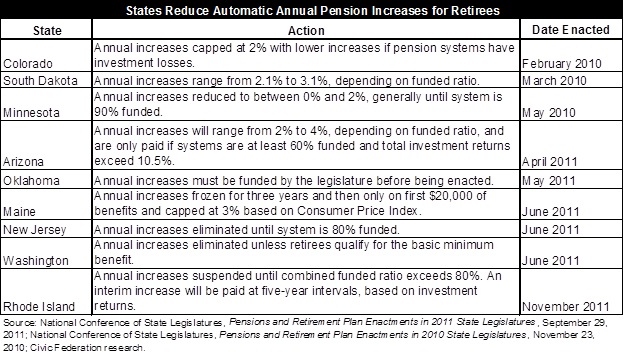 The changes approved by states such as Rhode Island have stirred more controversy because they affect the benefits of current retirees. Annual pension increases are generally intended to shield retirees from the effects of inflation. Union leaders have argued that public employees are being asked to bear a disproportionate share of the blame for the nationwide recession. Advocates of pension reform contend that the reductions are needed to sustain the retirement systems.

There is also uncertainty about whether the reductions in annual pension increases will survive legal challenges by retirees. State judges in Colorado and Minnesota dismissed court challenges by retirees in June 2011. An appeal has been filed in the Colorado case and a class-action lawsuit is pending in South Dakota.

Because of differences in state constitutions, statutes and case law, it remains to be seen whether court opinions in one state will apply to other states. Colorado and Minnesota, for example, do not have explicit provisions in their constitutions that protect pension benefits. In contrast, the Illinois Constitution (Article XIII, Section 5) states that membership in any pension system in the State is an enforceable contractual relationship and that members’ benefits “shall not be diminished or impaired.”

Rhode Island has no explicit constitutional protection for public pension benefits, but courts have provided protection based on impairment of contract principles. On November 22, 2011, four days after the new pension law was enacted, the Rhode Island Supreme Court declined to review a lower court order that allowed a union lawsuit challenging pension benefit reductions passed in 2009 and 2010 to proceed. The lower court had ruled that public employees have an implied contractual right to pension benefits.

Rhode Island’s new law is also expected to face a lawsuit. The law suspends future annual benefit increases until the combined funded ratio of the Employees’ Retirement System, the Judicial Retirement Benefits Trust and the State Police Retirement Trust exceeds 80%. An interim increase would be paid at five-year intervals, with the amount of the increase based on investment returns. The interim increase and any future annual increase would be applied only to the member’s first $25,000 of pension income, although that limit would grow at the same rate as the annual increase.