UPDATE: On May 24, 2012 the Illinois General Assembly approved legislation to permit Cook County’s public health system to obtain federal funding for medical services for low-income adults under the Medicaid program. The plan must still be approved by the federal government.

House Bill 5007 passed the House by a vote of 62 to 55 and the Senate by a vote of 35 to 22. The Cook County plan required an amendment to a State law enacted in January 2011 that placed a two-year moratorium on expansion of eligibility for Illinois’ Medicaid program.

HB5007 is contingent on the passage of two other Medicaid-related bills, one of which was already approved by the General Assembly on May 24, 2012. In addition, the law will not take effect if the planned Medicaid expansion under federal healthcare reform is blocked by the U.S. Supreme Court or repealed by Congress.

The State of Illinois is seeking public comment on a proposal that would allow Cook County’s financially challenged public health system to get a head start on federal funding for low-income adults who will be eligible for Medicaid under federal healthcare reform beginning in 2014.

For the Cook County Health and Hospitals System, the plan would offer early access to federal coverage for uninsured patients who currently do not pay for their medical services. Because of the Medicaid-financing arrangement used for the Health System, the expansion would not require State funds at a time when Illinois is struggling to pay its Medicaid bills.

The proposal, which is intended to take effect in July 2012, requires approval from the U.S. Department of Health and Human Services (HHS). The proposal also requires an amendment to Illinois’ Medicaid reform law, enacted in January 2011, which placed a two-year moratorium on expansion of eligibility for the State’s Medicaid program.

Medicaid is a joint federal-state program that finances healthcare for certain categories of low-income people, including children, pregnant women, the elderly and the disabled. Beginning in January 2014, the federal Affordable Care Act extends Medicaid coverage to all adult citizens with annual incomes up to 133% of the federal poverty level. (The federal poverty level is now set at $11,170 for an individual and $23,050 for a family of four.) The federal government is scheduled to pay 100% of the cost for the newly eligible population for the first three years of the expansion and at least 90% after that.

Illinois’ Medicaid program currently has an enrollment of 2.7 million. Roughly 500,000 people, including 265,000 in Cook County, are expected to gain coverage under federal healthcare reform. Cook County Health System officials have said that approximately 100,000 of those who will be newly eligible for Medicaid in 2014 are already Health System patients who have no insurance coverage.

The State applied for the early Medicaid expansion under Section 1115 of the Social Security Act, which gives the federal government authority to waive provisions of the Medicaid program and to allow states to use federal Medicaid funds in ways not otherwise allowed under federal rules. To approve this Section 1115 Medicaid Demonstration Waiver, HHS must determine that the initiative is an “experimental, pilot, or demonstration project” that is “likely to assist in promoting the objectives” of the Medicaid program. The State of California in November 2010 won approval from HHS for a similar head start on the extension of Medicaid coverage.

According to Illinois’ application, the newly covered patients would receive a specified package of medical services within a new regional network of healthcare providers consisting of Cook County hospitals and clinics as well as subcontracted community partners. The network would provide managed care, which is designed to focus on preventive services and avoid unnecessary hospitalizations and duplicate prescriptions.

The State’s 2011 Medicaid reform law requires that by 2015 half of Illinois’ Medicaid population be served in managed care networks in which healthcare providers bear financial risk for patients’ costs. The early expansion would provide the Cook County Health System with additional resources to prepare for this deadline and give the federal government more information about the cost of caring for the newly eligible Medicaid population, according to Illinois’ proposal. The Health System lacks certain basic resources and capabilities needed for managed care, such as an adequate number of case managers to coordinate patient care and the ability to make sure that patients are seen promptly for their appointments.

The Cook County Health System expects to enroll 125,000 newly eligible Medicaid patients by the end of 2013. Federal payments would be based on a predetermined monthly per patient allowance. The monthly allowance would start at $379 per patient, and total costs through December 2013 are estimated at $311.1 million.

Given the Health System’s financial problems, officials have said that approval of the waiver is essential. “We are fighting for our survival with the 1115 waiver,” Dr. Ram Raju, the System’s CEO, said at the System’s Board of Directors meeting on February 24, 2012.

More than half of the System’s patients are uninsured and generally do not pay for their care, but its operating revenues come largely from Medicaid. The System also receives a financial subsidy from Cook County, which has recently been struggling to keep expenses from growing faster than tax revenues.

As shown in the chart below, the System’s actual subsidy from the County in FY2011 (which ended on November 30, 2011) was $423.9 million, compared with a budgeted subsidy of $276.2 million. The deficit—the difference between the budgeted and actual subsidy—was $147.7 million. The County had to increase its subsidy to the Health System because the System’s operating revenues from patient fees fell far short of expectations. Patient fees covered by Medicaid were budgeted at $266.3 million but actually amounted to only $146.9 million. 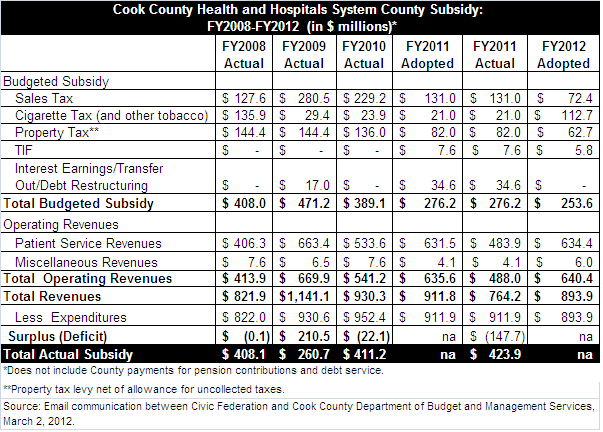