With the budget for the current fiscal year still incomplete, Governor Bruce Rauner proposed a financial plan for the next budget year with an operating deficit of $3.5 billion.

Rather than providing a specific plan to close the $3.5 billion gap between revenues and expenditures, the proposed FY2017 budget offers the General Assembly a choice between two options:

The recommended FY2017 budget does not address the continuing budget impasse in FY2016, although an operating deficit of $4.4 billion in FY2016 is shown in the budget document. The estimated results in FY2016 would require additional appropriations for areas of government that are not currently being funded, including higher education, certain human services programs and group health insurance.

The following table summarizes the proposed General Funds budget for FY2017. It also shows preliminary results for FY2015; estimated results for FY2016; and an FY2017 maintenance budget, which is defined in the budget document as the amount needed to fund agencies’ core missions and programs, after adjusting for price changes and one-time costs. 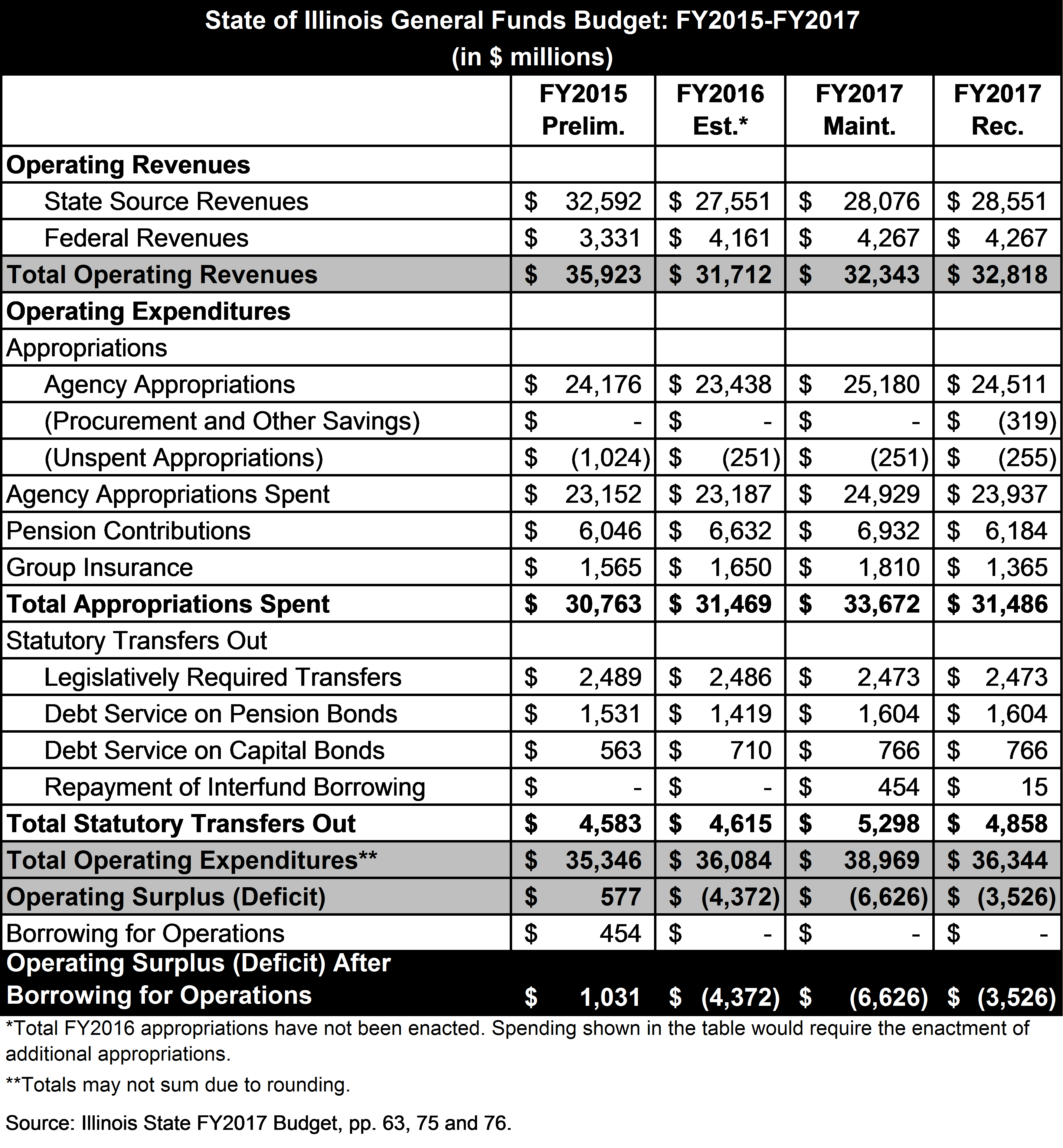 The budget document includes a line worth $3.5 billion labeled “Working Together or Executive Management,” representing the two proposed options for closing the shortfall. This amount brings the operating deficit to zero and satisfies the requirement in the Illinois Constitution that the Governor present a balanced budget, according to the administration.

Some of the projected revenue losses in the proposed FY2017 budget are offset by a total of $475 million from two one-time sources. The budget recommends spending down the entire $275 million balance in the Budget Stabilization Fund, the State’s only rainy day fund. An estimated $200 million from the proposed sale of the James R. Thompson Center is also included in FY2017 resources.

Proposed FY2017 expenditures of $36.3 billion are $2.6 billion below the FY2017 maintenance budget of $39.0 billion. The proposed savings include the following:

Even after these changes, the proposed FY2017 budget would still be out of balance by $3.5 billion. 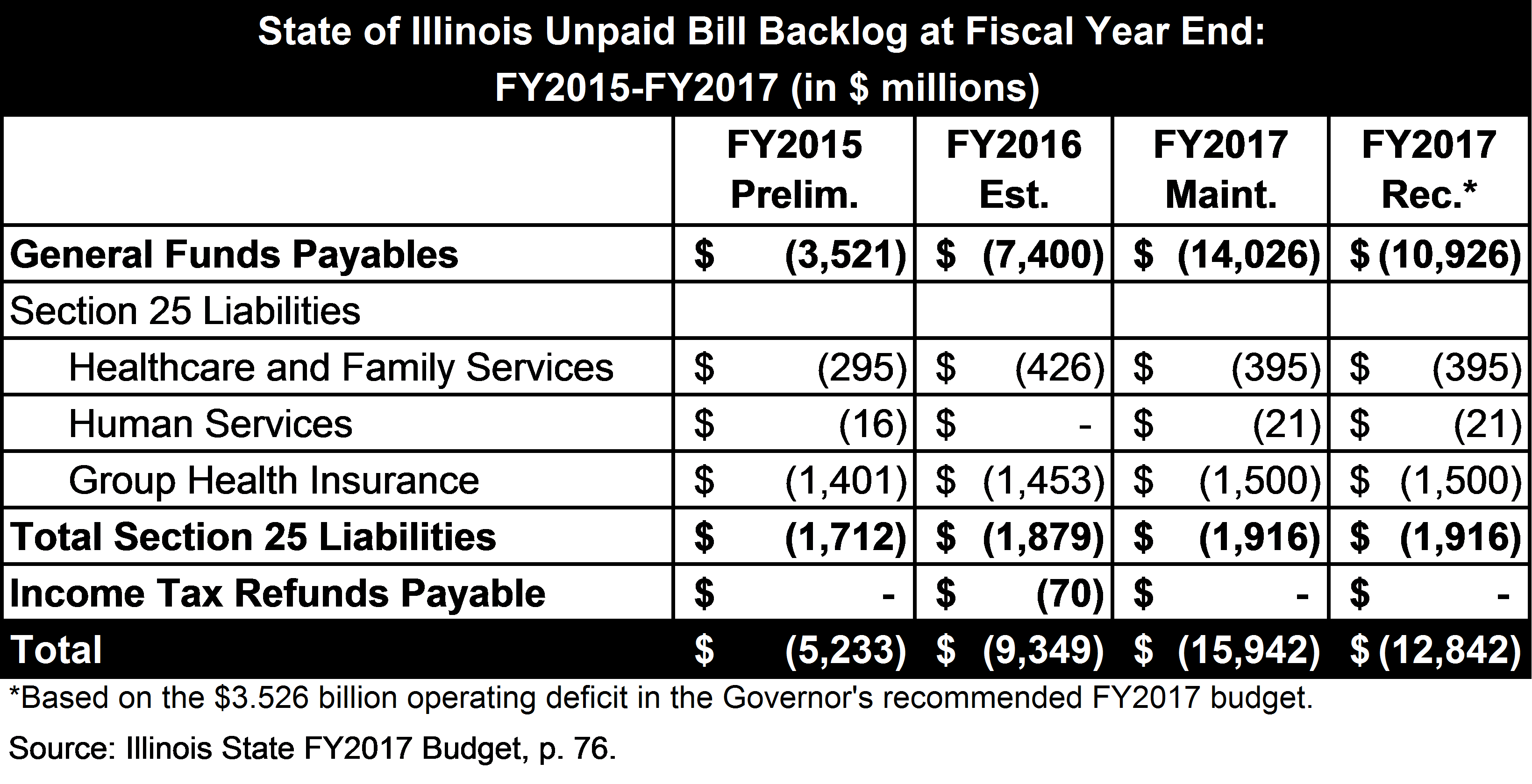 In the table, General Funds payables are bills and payments owed to vendors, State agencies and local governments that are paid during the lapse period. The lapse period is the time during which this year’s bills may be paid with next year’s revenues. Most bills are due to the Comptroller by two months after the end of the fiscal year, but the Comptroller has until December 31 to pay them.

Under State law, most bills must be paid based on the current year’s spending authority. However, exceptions to Section 25 of the State Finance Act permit the payment of certain bills based on future years’ appropriations. These bills are known as Section 25 liabilities. The authority to defer Medicaid bills at the Department of Healthcare and Family Services was sharply restricted beginning in FY2013; group health insurance bills currently represent the major Section 25 liability.

The table shows $70 million in unpaid income tax refunds at the end of FY2016, but that backlog is likely to grow to several hundred million dollars, according to testimony on March 1 at a hearing of the General Assembly’s Commission on Government Forecasting and Accountability. The current diversion rates—the percentage of individual and corporate income taxes diverted from General Funds to pay income tax refunds—are too low to cover estimated refunds for FY2016. Without an FY2016 budget in place, the diversion rates were determined by statutory formula.

The table does not include approximately $64 million in back wages owed to union employees as a result of a dispute over cancelled raises. A Cook County Circuit Court judge in December 2012 ordered the State to pay the back wages when funds were available, and former Governor Pat Quinn agreed to make the payments as part of contract negotiations with AFSCME, the State’s largest union.