Amid the frenzied activity at the end of the Illinois General Assembly’s spring session, a little-noticed tax on health insurers is expected to have a major impact on the State’s FY2020 budget.

The new tax on managed care organizations (MCOs) is expected to bring in nearly $1.1 billion in additional federal Medicaid revenues, according to estimates by Illinois officials. The extra federal dollars will be used to cover about $500 million in existing Medicaid costs and to support almost $600 million in new Medicaid spending, including higher reimbursement rates for nursing homes and increased payments for community mental health services.

As previously discussed here, the MCO tax follows the general pattern of other healthcare provider taxes, including Illinois’ longstanding hospital assessment program. Provider taxes, used in every state except Alaska, are a way to pull in more federal funds for Medicaid at no cost to the state.

Medicaid is a joint federal-state program that provides healthcare coverage for low income individuals. Financing the program is a shared responsibility, with states receiving federal matching funds for eligible state expenditures. Federal law allows a portion of the state share of Medicaid costs to be paid by healthcare providers, with certain limitations.

Illinois’ MCO tax must be approved by federal regulators. Due to federal requirements, the tax applies to health insurers that participate in the Medicaid program as well as those that do not serve Medicaid beneficiaries. The tax rate is much higher for Medicaid MCOs, but their tax outlays are fully reimbursed through higher monthly payments from the State for providing Medicaid services.

The new MCO tax is included in Public Act 101-0009, which is part of the budget package signed by Governor J.B. Pritzker on June 5. The legislation itself does not give details about the fiscal impact of the tax, but information was provided by the Illinois Department of Healthcare and Family Services (HFS), the State’s main Medicaid agency

MCOs will pay taxes estimated at $1.22 billion per year, which will be deposited into a special Medicaid account in the State budget. Of that amount, $503 million will be used to cover Medicaid costs previously paid from the State’s general operating funds. The remaining $717 million will generate almost $1.1 billion in additional federal matching funds.

The $1.1 billion figure is based on an estimated average federal reimbursement rate of 60%; in other words, for every dollar of State Medicaid spending, the federal government covers 60 cents and the net State cost is 40 cents. Federal reimbursement rates in Illinois currently range from 50.31% for most of the 3.1 million Medicaid beneficiaries to 93% for adults who became eligible due to the Affordable Care Act.

The diagram below shows how $717 million results in nearly $1.1 billion of federal funding and total Medicaid spending of about $1.8 billion through a cycle of spending and reimbursement that is referred to as “churning” by Medicaid finance experts. The cycle starts when the State spends $717 million on allowable Medicaid expenses and receives a 60% reimbursement, or $430.2 million, from the federal government. This process is repeated until Medicaid spending totals about $1.8 billion: approximately 40% from the State via the MCO tax and 60% from federal reimbursements. This is a simplified version of the actual process because in practice all of the $717 million would not be collected or spent at one time. 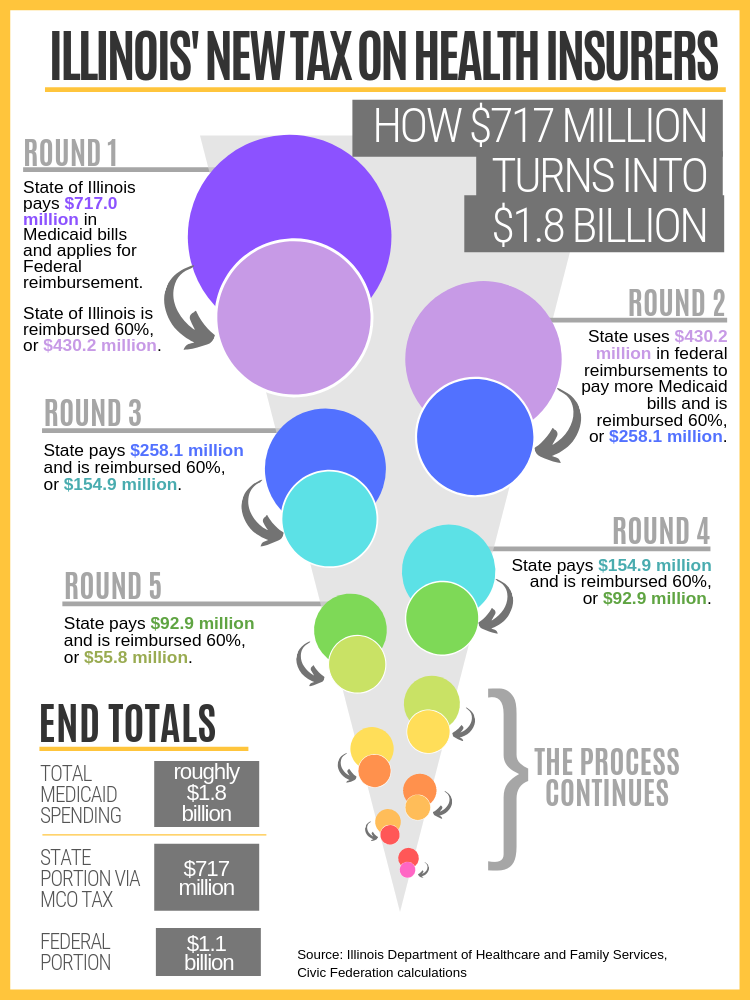 The enacted MCO tax is an expanded version of a tax originally proposed in Governor Pritzker’s FY2020 recommended budget. That plan called for MCOs to pay $867 million per year, of which $390 million would have covered existing Medicaid costs. The remaining $477 million would have generated about $716 million in federal matching funds and total Medicaid spending of about $1.2 billion. The Governor’s budget proposal did not specify tax rates or how the tax would be assessed.

HFS officials said the lower tax rate for Medicaid member months above 4.2 million is designed to meet a statistical test required for federal approval of the tax. Of the six Medicaid MCOs in Illinois, two—Blue Cross and Blue Shield of Illinois and Meridian Health Plan—had more than 4.2 million member months in 2018, the agency said.

Of the total MCO tax of $1.22 billion, only an estimated $26.3 million will be paid by non-Medicaid MCOs. Medicaid MCOs will recoup their approximately $1.19 billion in tax outlays through increased payments from the State. Medicaid MCOs are paid a set amount per member per month for providing services. Federal law and regulations require that the rates be actuarially sound, meaning that they provide for reasonable costs including state-mandated taxes.

The following table shows estimated payments and receipts related to the new tax for MCOs, the State and the federal government. The State has net receipts of $1.1 billion, after reimbursing Medicaid MCOs for their tax payments.

Although the table shows the tax as a wash for Medicaid MCOs, they could benefit from new Medicaid spending of $598.9 million, paid for with the additional federal revenues. The Illinois Association of Medicaid Health Plans, a trade group for Medicaid MCOs, supported the new tax.

Illinois officials said the State has collected about $100 million in new funding under the new tax on managed care organization, which was approved by the federal Centers for Medicare and Medicaid Services (CMS) in September. As explained above, the new tax is expected to generate net receipts of $1.1 billion for the State in the current fiscal year, of which $500 million will be used to reduce reliance on State funds and $600 million will support new Medicaid spending.