A new pension buyout plan designed to save hundreds of millions of dollars for the State of Illinois in the fiscal year that just ended actually generated relatively minor savings in FY2019 and does not appear likely to meet the annual cost-reduction target over the next few years.

The shortfall has occurred despite robust participation by members of the State Employees’ Retirement System (SERS), the pension fund that was supposed to account for most of the savings. The problem stems from the original savings estimate, which was overstated because it was based on a different buyout plan and further inflated due to technical miscalculations, according to SERS officials.

From the beginning, questions were raised about the significant savings projected from the buyout plan. The plan was not vetted in public hearings or evaluated by pension actuaries before it was inserted into the FY2019 budget as a cost-saving measure in May 2018.

An additional provision in the FY2019 budget limited State pension costs from salary spiking, the awarding of end-of-career salary increases by local school districts and universities. Together, the three pension changes were expected to reduce State pension contributions from general operating funds by $445 million in FY2019, including $382 million from the COLA buyout, $41 million from the inactive member buyout and $22 million from the salary spiking cap. The savings estimates were based on the assumption that 25% of retiring Tier 1 members would participate in the COLA buyout and 22% of inactive members would participate in the other buyout plan.

Actual General Funds savings are now pegged at about $13 million, according to recent reports by the three pension funds. All of the savings are from SERS, with about $11 million from the COLA buyout and an estimated $2 million from the other buyout plan. The reports, which show updated State contribution requirements for FY2019, can be accessed from the following links for SERS, the Teachers’ Retirement System (TRS) and State Universities Retirement System (SURS).

The table below compares budgeted and estimated actual General Funds pension contributions in FY2019, based on the recent retirement system reports. As discussed here, SERS was expected to account for $283 million of the total $445 million savings, with virtually all of that amount coming from the COLA buyout. State budget officials were not able to explain why SERS was projected to generate three times as much savings as the far larger TRS. 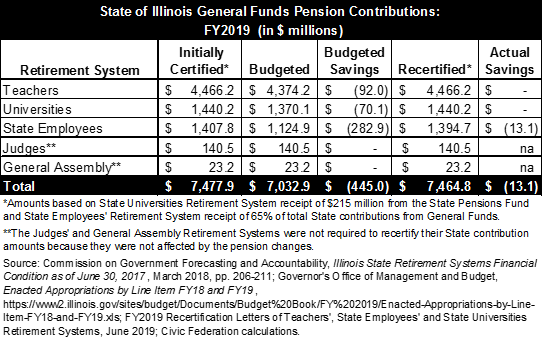 Most of the questions about savings due to the COLA buyout initially centered on employee participation. At SERS, however, participation in the COLA buyout has been nearly on par with expectations, with 500 of 2,119 retiring members, or 23.6%, choosing to accept the offer as of June 30.

General Funds savings of $11 million were far below the projected $279 million partly because the projection was based on an actuarial review of a different buyout proposal, SERS officials said. Among other differences, that proposal extended through FY2045, while the enacted COLA buyout ended in FY2021. As part of the FY2020 budget, the buyouts were extended through FY2024, which is likely to increase State savings.

Flaws in actuarial methodology relating to benefit projections and utilization assumptions also contributed to the inflated savings estimate in FY2019, according to SERS officials. Additionally, the General Assembly appears to have based its savings estimate on the total State contribution for SERS instead of the General Funds contribution; the pension fund receives about 35% of its State funding from other State accounts.

It took SERS about six months to implement the COLA buyout, but officials said FY2019 savings were not affected by the delay because most retirements occur in December and January. SERS estimated that 10% of inactive members will choose the other buyout plan, which began accepting participants in May 2019.

Implementation delays were an issue at TRS and SURS, neither of which revised their required State contributions for FY2019. TRS, the largest State pension fund, launched the COLA buyout in January 2019 and expects to implement the inactive buyout plan in late summer or early fall. As of mid-June, out of 3,224 TRS members who were retiring, only 79 had taken the COLA buyout, which had been budgeted to save about $56 million at a 25% acceptance rate. At SURS, where the COLA buyout had been budgeted to save about $47 million, members could not sign up for either buyout until the start of FY2020. TRS and SURS also reported no savings due to the tighter cap on salary spiking, which was repealed as part of the FY2020 budget.

For FY2020 TRS’ required State contribution incorporated assumptions about participation in the buyouts that were in line with the FY2019 budget. Contribution amounts certified by SERS and SURS did not reflect buyout savings. The pension funds established contribution requirements for FY2020 before the buyouts were extended through FY2024.

To pay for the buyouts, the State was authorized to sell up to $1 billion of bonds. So far, the State has issued $300 million at an interest cost of 5.74%. Of the $298.5 million in net proceeds, records from the Illinois Comptroller’s website show expenditures of $29.6 million for buyouts at SERS and $1.6 million for buyouts at TRS. SERS reports having spent an additional $17.6 million in FY2019, which is not yet reflected in the Comptroller’s records. The remaining bond proceeds continue to cost the State interest, but have not yet resulted in any pension savings.

Although the budgeted savings from the pension changes did not materialize in FY2019, the shortfall was more than offset by $1.5 billion in unexpected income tax receipts in April 2019. Due to that revenue influx, recent estimates show an operating deficit of $265 million in FY2019, after interfund borrowing. Before the April surprise, the projected FY2019 deficit was $1.6 billion.