State of Illinois Pension Contributions to Rise in FY2020, but by how Much?

Illinois’ contributions to its severely underfunded retirement systems are expected to increase significantly in the upcoming budget year, but the numbers could change due to pension buyout plans that have yet to be implemented.

Proposed State contributions to the five pension funds are $9.1 billion in fiscal year 2020, which begins on July 1, 2019. That represents an increase of $679.9 million, or 8.0%, from the $8.5 billion in contributions originally required in the current fiscal year.

However, the contribution amount for FY2019 is scheduled to be revised before the end of the fiscal year based on savings from the new pension buyouts. There are also questions about whether changes will be required for some of the FY2020 contributions that, as currently proposed, do not reflect any impact from the buyouts. As previously discussed here and here, the voluntary buyouts allow certain members of the three largest retirement systems to give up future benefits in exchange for an immediate payment from the State.

With those caveats, the following table shows State pension contributions from FY2018 to FY2020. 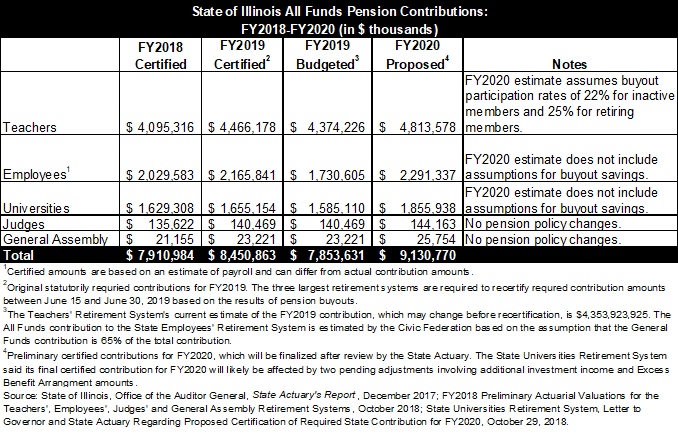 The FY2020 numbers are preliminary contribution amounts certified by the retirement systems’ trustees last month. Under State law, the numbers will not be final until the State Actuary completes a review of the calculations by January 1, 2019. Final certified contribution amounts from the systems are due by January 15 so they can be included in the Governor’s FY2020 budget recommendation in February.

The State used $445 million in projected pension savings to balance the FY2019 general operating budget. About 64% of the budgeted savings were attributed to SERS. Virtually all of the savings—$423 million—came from the two voluntary pension buyout plans. The budget assumed that 22% or 25% of those eligible would choose the buyouts, but the savings estimates were not based on actuarial reviews of the plans.

TRS said its proposed FY2020 contribution was based on the same assumptions about participation in the voluntary buyouts that were used by State officials in projecting budgetary savings. SERS said it had no basis to estimate the impact of the plans without any actual experience about members’ participation.

The budget did not set a specific deadline for implementing the buyouts, and they have not yet been offered. The three systems will not receive their last monthly payments from the State for FY2019 until they recalculate statutorily required contribution amounts to reflect savings from the buyouts.

As discussed here, TRS and SERS intend to begin offering the buyouts in December 2018 or January 2019, but SURS has indicated that it will not be able to fully implement the plans until after the end of FY2019. The pension buyouts will be financed by selling up to $1 billion in bonds through FY2021, when the buyout offers end. The date for the bond sale has not yet been announced.

The questions surrounding the FY2020 contribution amount demonstrate the problems created by relying on budgetary savings from pension policy changes with no actuarial review and no clear timetable for implementation. Regardless of the uncertainty, the Governor's Office will have to include specific contribution amounts in its proposed FY2020 budget, beginning with a five-year forecast due to be released next week.