The Pew Center on the States recently released its report card on the health of state pension systems. Just as they were last year, the funding status of Illinois’ pension systems is the worst in the nation, with the State only funding 51% of its liabilities through FY2009. States in marginally better shape include West Virginia with 56% funding and Oklahoma at 57%. Illinois has its work cut out as it tries to restore solvency to its pension systems. Pension funding best practices recommend that a state pension fund maintain at least 80% funding – a figure that Illinois is finding increasingly expensive to reach.

The 51% FY2009 funded ratio for Illinois cited in the Pew report is calculated using asset smoothing that reflects asset gains and losses over the five-year period of FY2005-FY2009. Because investment returns were relatively strong prior to the substantial decline in the stock market during much of FY2009 (the State’s FY2009 was July 1, 2008 through June 30, 2009), the use of asset smoothing resulted in lower reported unfunded liability levels and higher funded ratios in the short term. As the chart below illustrates, the fair market value funded ratio for Illinois’ five pension systems was only 38.5% for FY2009. 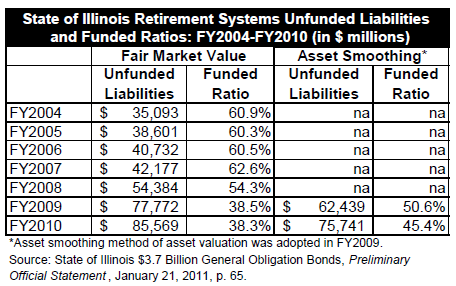 The State is required by statute to follow an employer contribution schedule that will achieve a 90% funding ratio in all five pension systems by 2045. However, the law does not require the State to make payments large enough to keep its unfunded liabilities from growing until about 2034. This post explained that even though market forces have had a harmful effect on Illinois’ pensions, the State has caused further funding disorder by not making its required contributions.

The State has made some reforms that will help it achieve pension solvency. Illinois instituted a second tier of reduced pension benefits system for all new State employees hired on or after January 1, 2011. The new tier of benefits includes higher retirement ages, a cap on the maximum pensionable salary and lower cost of living adjustments. Because they apply only to new employees, the reduced benefits will not have a significant impact on required state contributions in the short run.

The Pew report also discussed Illinois’ total liability for retiree healthcare and benefits. That liability, based on data from 2007 to 2010, stands at roughly $44 billion and is only 0.1% funded. Other states are not funding their obligations for post-retirement healthcare and benefits – New Jersey and New York both have larger liabilities on systems that are 0% funded. California’s retiree healthcare obligations total $66 billion, and like Illinois it has only funded those obligations by 0.1%.

Interestingly, only two states – Arizona and Alaska – have more than 50% of the funds needed to pay for retiree health benefits, but those states have obligations that are only a fraction of Illinois’. Unlike pension obligations, health and other post-employment benefit obligations vary greatly. According to this Pew study, “Some states, including Iowa, Kansas, North Dakota, South Dakota and Wyoming, have very minimal obligations. They generally do not provide retirees with help in paying premiums, but such states may allow retirees to be on the same plan as active employees, thereby incurring some costs associated with having older plan members who are likely to have more health problems. Other states, such as Arizona, Florida, Oklahoma and Virginia, have controlled costs by capping the amount of benefits paid.”