The State of Illinois’ underfunding of its retirement systems is a growing source of pressure on the State’s operating budget and an increasing focus of national attention. In a recent report by the Pew Center on the States, Illinois was found to be in the worst shape of any state with regard to the funding of its pension systems.

The financial information in the Pew report was based on data from June 30, 2008. As part of the recently released Fiscal Rehabilitation Plan for the State of Illinois, the Civic Federation has updated the financial data through June 30, 2009 and provided historical background and future funding projections for Illinois’ pension systems. The following section appears in the Civic Federation report starting on page 40.

As shown in the table below, Illinois’ retirement systems had total unfunded liabilities estimated at $62.4 billion and a combined funded ratio of 50.6% as of June 30, 2009. 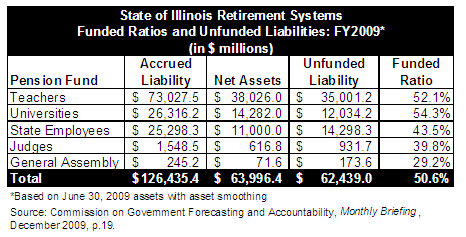 The figures in the table above reflect legislation approved by the General Assembly in July of 2009 that requires the retirement systems to account for unexpected investment gains or losses over a five-year period rather than recognizing them all at once. The method, known as asset smoothing, is used by major Chicago area local pension funds and by most other states. Because of the substantial decline in the stock market during much of FY2009, the use of asset smoothing will result in lower reported unfunded liability levels and higher funded ratios in the short term. Under the previous method of calculating asset values, COGFA in December of 2009 estimated total retirement system unfunded liabilities at $77.8 billion and a combined funded ratio of 38.5% as of June 30, 2009.

Although Illinois’ pension funding problems have been exacerbated by recent market conditions, the State for decades has skimped on contributions to its pension funds. At the end of FY1995, the systems’ unfunded liabilities stood at $19.5 billion. To help deal with chronic underfunding, lawmakers enacted a pension funding reform law, Public Act 88-593, which took effect in 1995 and established a 50-year schedule of funding requirements. After a phase-in period of 15 years, the law required State contributions at a level percentage of payroll beginning in FY2010 sufficient to achieve a 90% funded ratio by 2045. The retirement systems calculate and certify the amounts needed each year to meet the requirements of this funding schedule.

In addition, the State passed legislation that provided for several years of pension holidays, allowing it to avoid making even the full payment that would have been required under the pension reform law. The only year in which the State has contributed enough to keep the unfunded liability from growing was in FY2004, following the sale of $10 billion in 30-year pension obligation bonds in FY2003 to boost the retirement systems’ assets. The State used $7.3 billion of the proceeds from the bond sale to reduce unfunded liabilities, while the rest (after costs of issuing the bonds) was used to cover contributions to the retirement systems, freeing up nearly $2 billion to offset budget deficits.

In FY2010, the State’s total projected pension contribution is $4.0 billion. The General Funds portion of the contribution will be paid for through the issuance of $3.5 billion in five-year bonds. The State will be paying debt service on these bonds through FY2015 and on the previous $10 billion bond issue through FY2033. Debt service on the two bond issues totals $22.7 billion. Total pension debt service costs were discussed in a previous blog post. 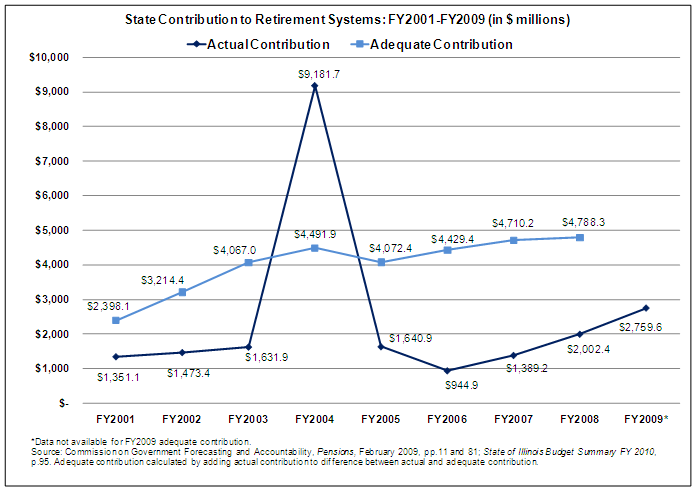 Inadequate state contributions accounted for $12.6 billion, or approximately one third, of the $38.3 billion growth in unfunded liability from FY2001 through FY2008, according to COGFA. Other major factors included lower than expected investment returns and benefit increases.

As shown in the next table, the systems’ unfunded liability is not projected to decline until 2034, after peaking at $117.2 billion a year earlier. 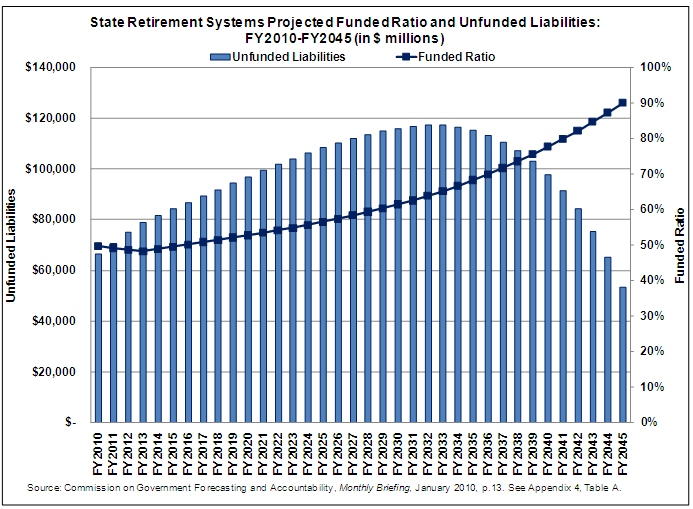 State pension contributions are projected to increase by an annual average of 12.2% from FY2010 through FY2045, from $4.0 billion to $21.4 billion, to meet the statutory funding requirement of 90%. This projected increase is shown in the next graph, which reflects the new asset smoothing requirement discussed above. 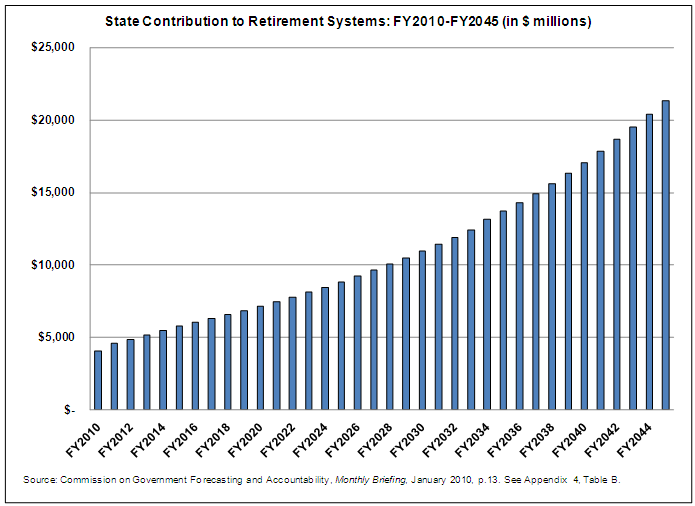