After several significant budget related initiatives failed to advance out of the General Assembly, such as proposed pension reforms and borrowing to pay down the State’s backlog of unpaid bills, the legislature passed an operating budget for FY2012 in the final hours of its regular session late on May 31, 2011.

The budget passed by both chambers and sent to Governor Pat Quinn totals $33.2 billion in General Funds operating expenditures for the coming fiscal year, which begins on July 1. The budget, which originated in the House, is $2.2 billion less than the total General Funds expenditures proposed by the Governor for FY2012, which totaled $35.4 billion. Some of the reduction from the Governor’s budget recommendation is accounted for by not paying the $400 million in debt service for the proposed $8.75 billion of borrowing, which failed to gain sufficient support in the legislature. There is also a slight difference in the way the General Assembly calculated the State’s required pension payment based on the contribution that was certified by the retirement systems for FY2012. The appropriation for the State’s pension payment passed by the legislature is $300 million less than the $4.6 billion estimate in the Governor’s recommended budget, totaling $4.3 billion instead.

The remaining $1.5 billion reduction is in the form of cuts to agency appropriations based on a spending limit set by the House in a resolution passed in March (HR110). After allocating funds for pensions, debt service and statutory transfers, the General Assembly’s agency appropriations total $25.4 billion compared to the Governor’s recommended amount of $26.9 billion. The Senate also passed its own appropriations measures totaling $34.3 billion, which did not advance out of the House.

The largest reduction from the Governor’s proposal in the budget crafted by the House is a $537.3 million cut in appropriations for the State’s Medical Assistance Program. As previously discussed here, the enactment of the House Medicaid budget most likely will an increase in the payment cycle for Medicaid bills, to as much as 100 days for many vendors. It also could increase Medicaid bills on hand at the end of FY2012 to an estimated $1.9 billion. The budget passed by the General Assembly includes other reductions proposed in the Governor’s budget, including a 6% rate reduction for hospitals, nursing homes and prescription drugs, which could save up to $552.2 million in next year’s budget. However, spending cannot be reduced unless rate or program cuts are authorized by the General Assembly through legislation or the departments are authorized to set new rules for the program.

The General Assembly approved a budget implementation bill specifically to address the human services cuts and manage the increased payment cycle (SB1802). The bill increases the amount of time the State has to pay its Medicaid bills without interest penalty from 60 days to 90 days and includes other provisions that may help the departments manage the lower funding levels. However, it remains to be seen if these budget cuts will actually reduce Medical Assistance expenses of the State by addressing the cost of the program. If it does not, the budget will merely underfund the program’s anticipated expenses, leading to a delay in State payments to Medicaid providers and increasing its backlog of unpaid bills.

The second largest cut in appropriations in the FY2012 budget is to the Illinois State Board of Education (HB326/HB327). The Governor’s budget included a total of $7.2 billion for elementary and secondary education, which is $394.5 million higher than the $6.9 billion budget approved by the General Assembly. The legislature’s budget cuts General State Aid by $151 million and keeps the foundation level flat at the same amount as FY2011. This leads to a total budget that is less than the enacted FY2011 budget, which totaled $7.0 billion. The budget also calls for the foundation level to be prorated in FY2013 to make up for the cut in FY2012.

As part of its budget deliberations, the Senate attempted to increase General State Aid by $152 million to restore the FY2012 foundation level in an amendment attached to the capital budget reauthorization (HB2189). There were other provisions in the bill that would have amounted to a total increase of $216 million for education and a total increase of roughly $430 million in General Funds appropriations. However, the House rejected the amendment and voted for non-concurrence, sending the bill back to the Senate. If action is not taken on the bill by the end of June, it could bring the entire $26 billion capital budget to a halt.

The remaining cuts to appropriations in the budget are spread throughout the various agencies. The following chart shows the 11 House bills and one Senate bill passed that included FY2012 General Funds appropriations for agencies and the total allocation in each bill. 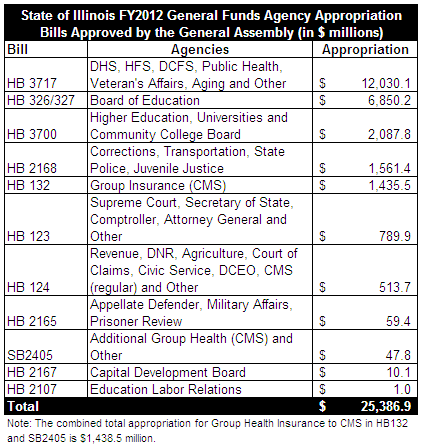 The budget approved by the General Assembly does not address the backlog of unpaid bills and other liabilities that the State expects at the end for FY2011. The Civic Federation’s analysis of the Governor’s proposed FY2012 budget estimated that the State would have a $4.6 billion backlog of accounts payable and a backlog of $3.3 billion in other liabilities for tax refunds, state group health insurance bills and Medicaid bills at the end of FY2011. To help cope with the ongoing cash flow issues caused by these liabilities, the FY2012 Budget Implementation Act (SB335) allows for increasing the delay in payments, from 60 days to 90 days, without penalty, and once again extends lapse period spending. For the second consecutive year, the State will have six months instead of 60 days to pay off all of the current year bills during the new fiscal year. However, all of the vouchers for FY2011 expenses still must be submitted to the Illinois Comptroller’s office by the end of August.

The budget implementation bill also expands the State’s interfund borrowing ability that was approved in FY2011. Interfund borrowing allows the State to borrow from cash balances in its Other State Funds to pay for General Fund operations. The funds are now also authorized for use in the Health Care Provider Relief Fund to pay for Medicaid expenses as well as for General Funds expenses. In FY2011 the State borrowed roughly $500 million from its special funds to pay for General Funds operations. These transfers are expected to be repaid by the end of fiscal year. The legislature also approved HB2934, which authorizes the State to borrow an additional $900 million from the Road Fund and State Construction Fund between now and July 25, 2011 to take advantage of the final months of the increased federal matching rate for Medicaid bills. However, this loan must be repaid by August 2011, which most likely will lead to a reciprocal increase in the State’s backlog of bills and further stress to the State’s payment cycle for FY2012 bills.

This post was revised on August 5, 2011 to reflect updated information.