Only two months into the new fiscal year, the State of Illinois has already begun pushing FY2011 operating costs into the next fiscal year.  By borrowing cash on hand in the State’s special funds, rather than sweeping it, the State has passed on more than $70 million in current operating cost to FY2012. As previously discussed on this blog, the State plans to borrow nearly $1 billion from these funds by the end of this fiscal year.

In the past, the State has dipped into the over 600 special funds that exist outside the General Funds budget, which rely on specific fees and grants rather than operating revenues, through annual fund sweeps and other one-time measures. These amounts were considered excess funding available to be spent on other State operations outside the funds designated purpose. However, the funds taken out in FY2011, unlike other recent years, are loans that must be repaid within 18 months. The State is also taking much more out of the special funds than has been withdrawn in any recent year. The following chart shows the State’s total special fund transfers to the General Funds between FY2003 and FY2010 compared to the amount the State plans to borrow from the special funds for operations in FY2011. 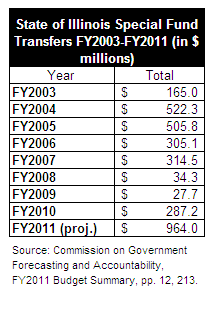 The inter-fund borrowing plan was authorized as part of the FY2011 Emergency Budget Act enacted by the Governor and General Assembly. The FY2011 Budget Summary recently published by the Commission on Government Forecasting and Accountability (COGFA) estimates inter-fund borrowing will total $964 million by the end of FY2011. Repaying these loans next year will further burden a budget already expected to be billions in the red and more than $6 billion behind in paying its bills.

Under the inter-fund borrowing plan, the State must also repay the amount of interest to the special funds that would have accrued had the money not been taken out of the account. The statute does not dictate how this rate will be calculated or indicate if it will be less expensive than taking out a short-term loan on the municipal bond market. However, it will circumvent limitations of how much the state can borrow in the short term and for what length and purpose.

Under the Illinois Short Term Borrowing Act, the State may issue short-term debt certificates based upon revenue anticipation or shortfall. If the State experiences significant timing variations between when its bills are due and when it receives its revenues, the State may borrow up to 5% of the total annual appropriations for that fiscal year. This type of loan must be repaid entirely within the same budget cycle. The State may also borrow up to 15% of the total appropriations for any year if there is a failure in revenue. This type of short-term borrowing must be paid back within 12 months of issuance. The State has already borrowed $1.3 billion in short-term notes under the latter provision in FY2011, which will cost the State an estimated $26 million in interest. This loan will be repaid before the end for FY2011 according to the bond documents. The inter-fund borrowing is in addition to the borrowing authority under this act.

In its August monthly briefing, COGFA included a list of all 60 funds that the State had borrowed from in July and August, totaling $60.7 million. The largest funding transfer reported by COGFA was from the FY09 Budget Relief Fund. This fund was established in October 2008 through sweeps from other special funds totaling $221.3 million. Since then, money from the account could only be spent through specific appropriation by the General Assembly. The Comptroller’s records show that the fund has a current balance of $851,059 after the funds were loaned to the FY2011 General Funds budget. It is unclear what purpose this funding will serve when it is repaid in the next fiscal year, since the fund was established to provide relief through other funds sweeps for the FY2009 budget year.

The second largest inter-fund transfer appears more complicated.  COGFA reported an inter-fund loan totaling $12.5 million came from the Illinois Power Agency Trust Fund. According to the Illinois Comptroller’s website, the State took an additional $11.8 million out of the fund in September, which is not included in the COGFA summary. The online records show the fund now has only $416,602.65 remaining. The fund was established in FY2008 with a $25 million endowment established through a portion of a $1 billion settlement over rate fixing allegations against private energy companies in Illinois.  The Illinois Power Agency was established as an alternative to enacting specific regulations to prevent energy price gouging by the companies that control both the energy supply and distribution and are part of the same parent companies. The state-run office was tasked with taking over the procurement process between energy suppliers and distributors to ensure that consumers in Illinois get the best prices available on the market and prevent collusion between the various arms of the energy conglomerates.

The trust account is intended to provide the agency’s operational funding through the interest income from the deposit. Each year the Treasurer deposits the amount earned by investing the $25 million over to the Illinois Power Agency operating budget. The enacted budget shows this transfer totaled $550,000 in FY2011. The original State statute establishing the agency and the trust fund specifically restricts use of the money in the fund for any other purpose than funding the agency. The law was later amended to allow the funds also to be used to secure a loan for building a State owned power plant, originally proposed as a “clean coal” facility in Taylorville, Illinois. Construction on this facility was planned to begin in December 2010 but recent criticism from the Illinois Commerce Commission has threaten to delay the project.

With nearly all of this money used to pay for other State operations and not available until FY2012, it is unclear how the agency’s budget or the planned facility will be affected. However, other funding has been made available for the project through the state capital budget and the Illinois Power Agency reportedly has only one employee and very low costs. It is also uncertain if there are any legal issues with the State using the settlement proceeds for anything other than their statutorily designated purpose or if it will face opposition to the transfer from the power companies.

Under the budget act establishing the transfer powers, the Governor’s Office of Management and Budget is required to make quarterly reports to the legislative leaders and COGFA, detailing all of the transfers made and the fund balances remaining after the transfers. There is no requirement that these reports be distributed to the public, but COGFA typically produces several updates each year in its monthly briefing on the State’s specials funds. Details of the revenues and expenditure of all the State’s funds are also included in the Comprehensive Annual Financial Statements published on the Comptroller’s website.