This blog post was updated on June 4, 2012 to reflect corrected information.

With just hours to go before a midnight adjournment deadline, the Illinois General Assembly has passed most components of a legislative package designed to eliminate a projected $2.7 billion gap in the Medicaid budget for FY2013.

The bills, which are expected to be signed by Governor Pat Quinn, include Medicaid program reductions, reimbursement rate cuts for healthcare providers and a cigarette tax increase. Another measure allows Cook County’s public health system to receive federal funding for treating certain patients before the implementation of national healthcare reform.

As discussed here, Governor Quinn’s FY2013 budget proposal for the year that begins on July 1, 2012 underfunds the Medicaid program by roughly $2.7 billion. The Governor directed a legislative working group to develop a plan to eliminate the funding gap and subsequently issued his own Medicaid proposal.

The Governor’s Medicaid proposal would have closed the gap through a combination of program reductions (approximately $1.35 billion), reimbursement rate reductions for healthcare providers excluding doctors ($675 million) and resources provided by a $1 increase in the cigarette tax ($675 million).

Although the bills passed by the General Assembly conform to the overall framework of the Governor’s plan, certain provisions were added or revised. The following chart shows the bills and their projected fiscal impact. 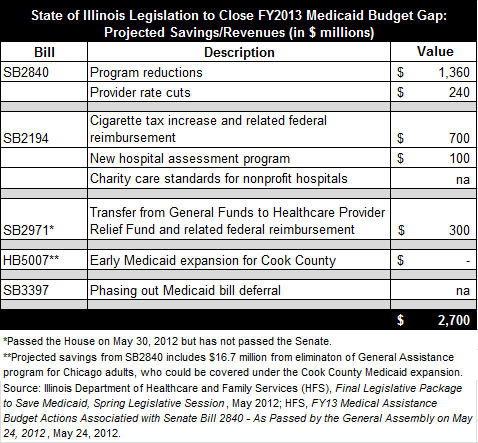 Senate Bill 2840, which passed both the House and the Senate on May 24, 2012, includes $1.36 billion in program reductions and $240 million in reimbursement rate cuts. The 61 specific program changes and resulting savings projected by the Illinois Department of Healthcare and Family Services (HFS) can be found here.

The largest projected savings in the bill is $350 million from tightening eligibility verification procedures to ensure that ineligible recipients are removed from Medicaid rolls. HFS had initially estimated savings of $120 million, but the Illinois Hospital Association argued that State officials had underestimated the number and cost of ineligible recipients.

The reimbursement rate cuts in SB2840 totaling $240 million represent a 3.5% reduction for hospitals, compared with an estimated 8% cut under the Governor’s proposal. The rate cuts do not apply to doctors or safety net hospitals, which are nonprofit hospitals that provide a relatively large amount of free care or treat a large share of Medicaid patients.

As in the Governor’s plan, SB2840 also eliminates medical services for approximately 26,400 higher-income parents now covered by the Family Care program, all dental services for adults except for emergency care and group psychotherapy for nursing home residents. The bill ends the Illinois Cares Rx prescription drug program for seniors and the General Assistance program for adults in Chicago, neither of which qualify for federal reimbursement. The bill also includes numerous service limitations, such as generally restricting prescriptions to four a month and limiting eyeglasses to one pair every two years.

SB2840 only takes effect if two other bills are enacted: House Bill 5007 and Senate Bill 3397. HB5007 also passed both chambers of the General Assembly on May 24, 2012. The bill exempts the Cook County Health and Hospitals System from a moratorium on Medicaid expansion in Illinois, thus permitting it to pursue advance federal funding for patients who are scheduled to be newly eligible for Medicaid under national healthcare reform in 2014. As explained here, the State does not pay Medicaid expenses for the Cook County Health System. The Cook County plan must still be approved by the federal government. HFS expects that the 9,160 Chicago patients now served by General Assistance could be covered by Medicaid under the Cook County plan.

SB3397 virtually eliminates the State’s ability to defer Medicaid bills under the Section 25 exception to the State Finance Act. The bill passed the House on May 30, 2012 and the Senate on May 31. The Section 25 exception allows Medicaid costs to be paid from future years’ appropriations and has been used as a budget-balancing device. Underfunding of Medicaid costs in FY2012 is expected to result in a $1.9 billion backlog of bills at the end of the fiscal year. SB3397 would limit Section 25 Medicaid liabilities to $700 million in FY2013 and $100 million thereafter. The bill also extends the lapse period for Medicaid bills to six months from the normal two months.  During the lapse period, revenues from the next fiscal year may be used to pay bills from the current fiscal year.

Another key component of the Medicaid legislation is Senate Bill 2194, which passed the House on May 25, 2012 and the Senate on May 29, 2012. SB2194 includes a $1 a pack increase in the State’s cigarette tax, as well as taxes on other tobacco products. The new taxes are expected to bring in $350 million in revenue, which will be matched by an additional $350 million in federal reimbursements through a cycle of spending and reimbursement known as churning.

SB2194 also includes a new hospital assessment program designed to provide $100 million for the State. Hospital assessments allow the State to obtain federal reimbursement on payments for medical services funded by taxes on hospitals. The State shares the additional federal funding with hospitals, which are expected to receive $380 million due to the new program. Another provision of SB2194 establishes a property and sales tax-exemption framework for nonprofit hospitals. As explained here, an Illinois Supreme Court decision in 2010 and subsequent rulings by the Illinois Department of Revenue raised questions about how much charity care nonprofit hospitals must provide to patients in exchange for their property-tax exemptions. The Civic Federation’s position statement on charitable property tax exemptions for nonprofit hospitals can be found here.

The remaining $300 million needed to close the $2.7 billion funding gap is expected to come from additional revenues beyond projections that are now forecast to be available in both FY2012 and FY2013 and related federal reimbursements. Senate Bill 2450, signed by Governor Quinn on May 18, 2012 and now known as Public Act 97-0684, transfers $151 million from general operating funds to the Healthcare Provider Relief Fund. Through churning, this will generate roughly $300 million to pay down Medicaid bills in FY2012. Senate Bill 2971 would make the same amount of money available in FY2013 to pay Medicaid expenses. SB2971 was passed by the House on May 30, 2012 but has not been passed by the Senate.