FY2013 Budget Update: Unfunded Costs in the Department on Aging

This blog has previously addressed unfunded costs in the State of Illinois’ FY2013 budget, including costs relating to Medicaid and employee and retiree group health insurance. As discussed here, these costs will increase the State’s backlog of unpaid bills unless they are covered by supplemental appropriations.

Another area with unfunded costs is the Community Care Program in the Illinois Department on Aging. Established in 1979, the program is designed to allow seniors to stay out of nursing homes by providing in-home services such as cleaning and meal preparation and community-based care such as adult day services.

The program’s monthly caseload has more than doubled to a projected 80,100 in FY2013 from 38,950 in FY2003, according to the Department on Aging. During the same period, appropriations for the program have more than tripled to a budgeted $753.5 million from actual spending of $223.8 million.

The following chart shows the growth in the program’s caseload and appropriations from FY2003 to FY2013. (Click to enlarge.) 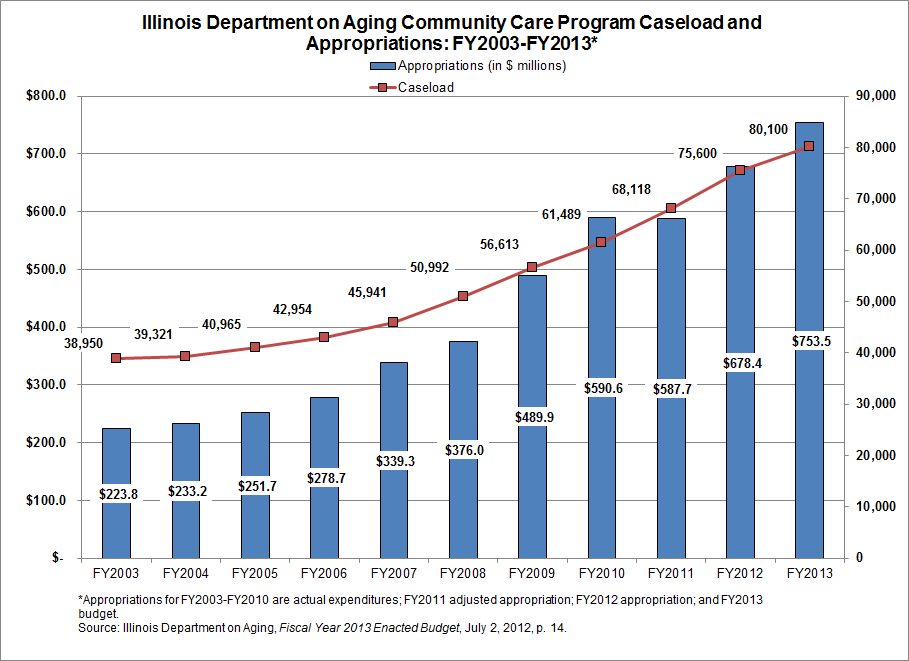 Despite the increase in appropriations, budgeted funding has not kept up with the actual costs of the program, according to information provided by the Governor’s Office on Management and Budget (GOMB). The program was underfunded by $100 million in FY2011, $73 million in FY2012 and is projected to be underfunded by $140 million in FY2013. That means that a total of $313 million in unpaid bills related to the Community Care Program will be on hand on June 30, 2013, unless additional funds were appropriated by the General Assembly. GOMB officials indicated that Governor Pat Quinn plans to seek a supplemental appropriation of $173 million.

How can a program incur costs that exceed budged appropriations? In the case of group health insurance and Medicaid, the answer is the Section 25 exception to the State Finance Act. As discussed here, this provision allows Medicaid and group health insurance costs to be paid from future years’ appropriations. (The ability to defer Medicaid costs was significantly curtailed as part of a package of laws related to a restructuring of the Medicaid program enacted in June 2012.)

The Department on Aging is not covered by the Section 25 exception, but in recent years the State’s annual appropriation bills have allowed the program’s prior year costs to be paid for out of the next year’s funding. The agency’s appropriation bill for FY2013, for example, states that amounts appropriated for the Community Care Program cover prior year costs. Like the Section 25 exception, this language allows the State to budget expenditures in a given year that are below expected costs in order to help balance the budget. Meanwhile, bills pile up outside the budget.

The underfunding of the Community Care Program in FY2013 relates partly to expected savings that were not achieved. In keeping with the Medicaid restructuring, the State proposed to raise the required level of care needed by seniors in order to qualify for both institutional and community-based services. This change, however, has not been approved by the federal government.

GOMB’s latest update on the enacted FY2013 budget showed $34.4 billion in general operating resources and $33.0 billion in expenditures, resulting in a projected operating surplus of $1.4 billion. The operating surplus would be used to pay down the State’s backlog of General Funds bills, estimated at $5.4 billion at the beginning of FY2013. (This backlog does not include Medicaid, group health and Aging-related bills outside of the General Funds.)

Without additional revenues, the $1.4 billion operating surplus would be reduced by any supplemental appropriations. GOMB has estimated that the General Assembly did not appropriate roughly $550 million needed to fund group health insurance costs and did not authorize a $229 million transfer out of General Funds that would be used partly to fund Medicaid costs.

Governor Quinn has also said that he plans to seek increased funding for the Department of Children and Family Services (DCFS), which saw its FY2013 General Funds budget reduced by $60.7 million from the level recommended by the Governor. Additional funding for DCFS is expected to come from appropriations for correctional facilities that the Governor wanted to close but that legislators sought to keep open. Governor Quinn vetoed funding for the facilities, and the veto was upheld by the General Assembly.