A $1-per-pack cigarette tax increase enacted by the State of Illinois in June to help fund the State’s Medicaid program is bringing in far less revenue than originally expected and could fall short of projections by as much as $125.7 million. However, due to the way the tax was enacted it is not expected to have a major impact on Medicaid funding.

The Illinois Department of Revenue (IDOR) has reduced the estimate of additional revenues attributable to the cigarette tax increase citing a run on tax stamps by distributors before the higher rate took effect. Total revenues generated at the increased rate of $1.98 per pack are now expected to total $726.7 million, down from the original projection of $852.4 million. Medicaid funding is protected from these losses because the entire $1.00 per pack increase is designated to pay for program costs. Medicaid funding is also preserved by offsetting revenue gains from other tobacco taxes.

The tax increase was approved as a component of the State’s plan to eliminate a $2.7 billion funding gap for the Medicaid program in FY2013. Legislative estimates during spring session showed the tax producing $350 million in State revenues that would be matched by federal revenues for a total of $700 million in total resources. Medicaid spending is reimbursed by the federal government at a rate of 50% but State spending on Medicaid is doubled through a cycle of payments and federal reimbursement sometimes referred to in Illinois as “churning.”

Illinois collects the cigarette tax through stamps sold to distributors of tobacco products equal to the amount of the tax. The stamps are then affixed to cigarette packaging and the cost passed on to consumers. To prevent distributors from stockpiling the stamps, IDOR attempted to administratively limit their sale between May, when the discussions regarding the proposal to increase the cigarette tax rate began, and when it took effect on June 24, 2012. However, distributors won a temporary restraining order against the department that prohibited them from restricting sales on June 14, 2012, the same day the Governor signed the bill into law. According to IDOR, this led to a massive run on cigarette tax stamps at the lower rate and will greatly reduce anticipated revenues from the cigarette tax in FY2013.

The following chart shows monthly revenue from cigarette taxes in FY2011 and FY2012 at the lower rate of $0.98 per pack, compared to the first two months of FY2013 at the higher rate of $1.98 per pack. 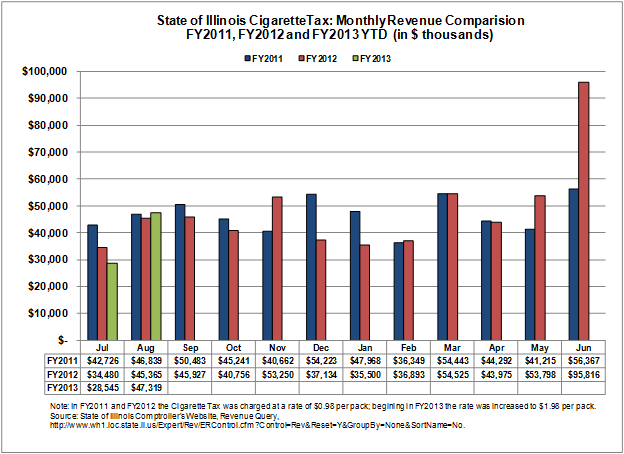 As shown in the chart above, through April 2012 total year-to-date cigarette tax revenues were initially down by $35.4 million from the same period in FY2011. Then in May, as the proposal to increase the cigarette tax to help fund Medicaid emerged during the General Assembly’s spring session, cigarette tax collections began to increase. IDOR notified distributors that it would be limiting cigarette tax stamps sales to prevent hoarding, which led the tobacco industry to challenge the rule in court.

After the law was enacted and the restraining order issued to allow for unlimited purchases of the tax stamps, cigarette tax revenues skyrocketed to $95.8 million in June, an increase of $42.1 million over the previous month and a year-to year increase of $39.4 million. By the end of FY2012, increased tax stamps sales not only erased the 10 month year-to-year decline but revenues ended up growing to a total of $577.4 million, or $16.6 million more than the FY2011 total of $560.8 million.

The jump in FY2012 stamp sales led to a drop in tax revenues from cigarette stamp sales in July 2012 despite the more than doubled tax rate. Although August revenues increased slightly over FY2011 and FY2012, revenue data available on the State of Illinois Comptroller’s website shows that the State has only received $16.3 million in additional funds for the Medicaid program from the cigarette tax increase through the first two months of FY2013.

Due to hoarding, IDOR currently estimates that total packs of cigarettes sold under the increased tax rate in FY2013 will total 367 million, down by 63.5 million from the original estimate of 430.5 million packs. Prior to the cigarette tax increase it was estimated that the FY2013 sales would total 524 million packs, which was reduced to account for the lower demand due to the higher price.

After adjusting for the drop in demand combined with the increase in the cigarette tax rate, the IDOR estimated cigarette tax revenues would increase to $852.4 million or $338.9 million more than the $513.5 million projection at the original tax rate of $0.98. The State also increased the tax rate on other tobacco products from 18% to 36%, which was estimated to generate $11 million in new revenue, also to pay for Medicaid costs.

After the new tax rate of $1.98 was applied to the lower hoarding estimate of 367 million packs, new projections show total cigarette tax revenues dropping to $726.7 million, a $125.7 million reduction from the initial tax increase projections and only $213.1 million more than the pre-increase total. However, due to the hoarding the State is also increasing its estimate of how much it will recoup from the early purchase of cigarette tax stamps through a ‘floor tax’ included in the tobacco tax increase. The floor tax is imposed when a distributor’s monthly FY2012 average purchases exceed their FY2011 monthly average purchases. The difference amount is what the distributor owes in floor tax for FY2013, which totaled $13 million in new revenues not accounted for before the hoarding.

The following table shows the change in total revenues projections from cigarette and tobacco taxes for FY2013.

Despite the lower total revenue outlook for FY2013, Medicaid funding from cigarette taxes, along with increases in other tobacco taxes, is still estimated to total $345.5 million. The funding intended for Medicaid is protected by the statutorily required distribution of the funds under the cigarette tax legislation.

Under the law, the original $0.98 tax is still split between the three funds. The General Funds receives the first draw on the tax proceeds of $355 million annually. Revenues received above the General Funds payment are then deposited to the School Infrastructure Fund totaling up to $60 million annually. The remainder is then deposited into the Long Term Care Provider Fund, a fund used to pay for Medicaid expenses. All of the additional $1.00 per pack from the rate increase is transferred into the Hospital Provider Fund to pay for previously underfunded Medicaid costs.

The following tables show how the revenues are deposited into various funds and the effect of the new revenue projections for the cigarette and tobacco taxes. 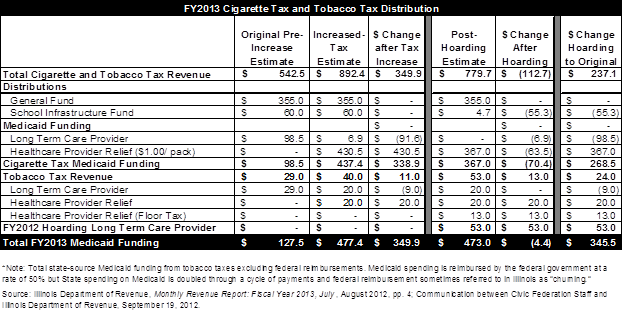 As shown above, although the Medicaid funding associated with the cigarette tax increase is only mildly affected by the lower sales estimates (reduced by $4.4 million), the School Infrastructure Fund transfer is almost entirely eliminated. Revenues deposited in the School Infrastructure Fund are used to pay debt service on General Obligation bonds associated with statewide school construction. The lower funding from the cigarette tax could lead to a $55.3 million increase in the required General Funds debt service payment if these estimates hold true and no other revenue source makes up the difference.