In the wake of protests over the deaths of George Floyd and other Black Americans at the hands of police officers, police accountability and reform has risen to the forefront in government discussions, and residents in many cities have called for defunding the police. The defund-the-police movement has called into question the best use of budget resources and whether some issues often handled by police would be better served through community services. The Minneapolis City Council passed a resolution to conduct a yearlong process to explore a new community-based public safety model. New York City’s mayor has committed to redirecting some funding from its police department to youth and social services. The Los Angeles City Council plans to redirect $150 million from the police department budget to disadvantaged communities and communities of color.

Some Chicago City Council members have called for cuts to police department funding and for more investment in public services, while other Council members oppose cutting police funding citing concerns that crime could rise.

Given the current focus on the Chicago Police Department budget, this blog post examines how much the City of Chicago allocates in its budget for Police Department spending and how budget resources are spread across all of the City’s services and functions.

The Chicago Police Department’s budgeted spending across all funds (including grant funds) for 2020 totals $1.76 billion. Excluding grant funding of $81.3 million in 2020, the Police Department budget totals $1.68 billion. The majority of this amount, $1.64 billion, is accounted for in the Corporate Fund, the City’s general operating fund. When also accounting for the City’s contribution to the Police Pension Fund, which is $737.5 million in 2020, the budgeted cost of police to the City of Chicago increases to $2.45 billion. However, it should be noted that the City of Chicago does not break out by department the cost of employee benefits and some other costs attributable to the Chicago Police Department that are budgeted under the Finance General category.

It is important to note that the budget figures discussed in this analysis are amounts approved by the City Council in the City’s annual budgets, not the amounts that are actually spent. Budgeted appropriations are used rather than actual expenditures for past years based on the data available in the budget documents. Actual expenditures can vary from budgeted appropriations. For example, police overtime costs in past years have far exceeded budgeted overtime allocations.

In addition to the Corporate Fund, Police Department activities are budgeted through the O’Hare and Midway Airport Funds for the 294 FTEs that provide police services at Chicago’s two airports, the Controlled Substance Fund, and the Chicago Police CTA Detail Fund. The Chicago Police Department and CTA have an intergovernmental agreement that allows sworn officers to be paid for providing security on Chicago Transit Authority property during off-duty hours through the voluntary Special Employment Program. The CTA reimburses the City for this program.

Grant funds in 2020 will account for $81.3 million and 128 FTE positions. The largest anticipated grant funding for 2020 is $19.8 million for the Community Oriented Policing Services (COPS) Program.

There are also police-related expenditures that do not appear directly in the Chicago Police Department budget. An indirectly related cost is the annual contribution the City of Chicago must make to the Police Pension Fund. The 2020 contribution to the Police Fund required by State statute is $737.5 million.[2] Pension funding costs have been rising over the last five years as the City of Chicago has worked to address the severe underfunding of the City’s four pension funds. The Police Pension Fund was only 22% funded as of the end of 2019, meaning the pension fund only has assets to cover 22% of projected future liabilities. The City has gradually increased pension fund contributions since 2015 based on the passage of Public Act 99-0506, funded by an increase in property taxes. The $737.5 million contribution in 2020 is supported by $592.7 million in property tax revenue, with the remainder funded by transfers from the Corporate Fund (mainly local tax and fee revenue) and the O’Hare and Midway Airport Funds (airport fee revenues). The Police Pension Fund contribution will continue to increase in future years in accordance with the actuarial contribution schedule. Additional expenses not budgeted for in the Chicago Police Department budget, but instead in the cross-departmental Finance General category, include the cost of employee benefits. This makes it difficult to get a true accounting of the total cost of the police in the City of Chicago budget.

A snapshot of the Police Department FY2020 appropriations across all funds, as well as the Police Pension Fund and FTE positions is shown below. Again, however, these numbers do not include employee benefits and some other cross-departmental expenses, since they are not broken out by department in the City budget. 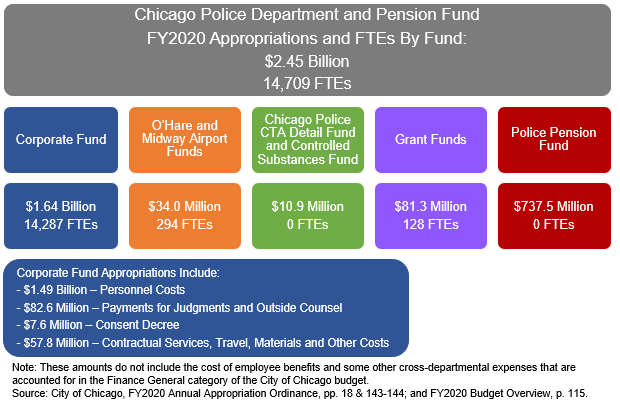 As noted in the figure above, Corporate Fund spending for the Police Department includes an appropriation of $82.6 million for payments for judgments and outside counsel related to police lawsuits. Historically, the City had budgeted for judgments and settlements outside the Police Department budget, and has also relied on the expensive practice of borrowing through bonds to cover settlements, making those payments difficult to track through budget data. By most accounts, these settlements have been extremely costly—totaling $757 million from 2004 through 2018 according to City data obtained by the Chicago Tribune, including payments for settlements, outside counsel, losses at trial, payouts to opposing counsel, and other types of legal matters including car crash claims, racial discrimination complaints and sexual harassment suits. Based on the City of Chicago’s 2017 Annual Financial Analysis, the City used bonds to finance $719.8 million (56.6%) of a total of $1.3 billion in legal settlements and judgments between 2007 and 2016. This includes police settlements as well as other types of lawsuits against the City. Since then, the City says it has been shifting these expenses into the operating budget rather than relying on borrowing to pay for settlements and judgments.

Policing activities also occur outside of the City’s budget appropriations. For example, the Chicago Police Department has an intergovernmental agreement with Chicago Public Schools to provide police officers known as school resource officers in designated schools. Per the one-year agreement, Chicago Public Schools is required to reimburse the Chicago Police Department $33 million for school resource officer services provided between September 1, 2019 and August 31, 2020. Amid calls to remove police officers from schools, however, the Chicago Board of Education plans to vote on whether to terminate the agreement between CPS and the City of Chicago at its June 24 meeting.

Police oversight activities conducted by the Chicago Police Board and the Civilian Office of Police Accountability are budgeted separately through their own departmental budgets.

The chart below shows the Chicago Police Department’s budgeted spending levels and full-time equivalent positions over the past ten years (though it is important to note that actual expenditures and filled FTE positions may differ from budgeted levels). Over the ten-year period, budgeted appropriations for the Police Department across all funds except grant funds increased from $1.32 billion in FY2011 to $1.68 billion in FY2020. During the same period, the number of budgeted FTE positions decreased from 15,620 in FY2011 to a low of 13,649 in FY2016, then increased to 14,581 in FY2020. Police Department appropriations over this period have increased by 27.7%, while the number of full-time equivalent positions has decreased by 6.7%.

There are several contributing factors to increases in the Police Department appropriations, including increases in employees and increases in salaries and wages set by collective bargaining agreements with the Fraternal Order of Police and several other unions.

Former Mayor Rahm Emanuel announced a plan in 2016 to increase the number of police officers by 1,000 over two years in response to a significant increase in gun violence that year. At the end of 2018 the City announced that its hiring plan was complete, with more patrol officers, detectives and leadership positions (sergeants and lieutenants). By 2019, the Police Department had about 1,200 more budgeted positions than it had in 2016. 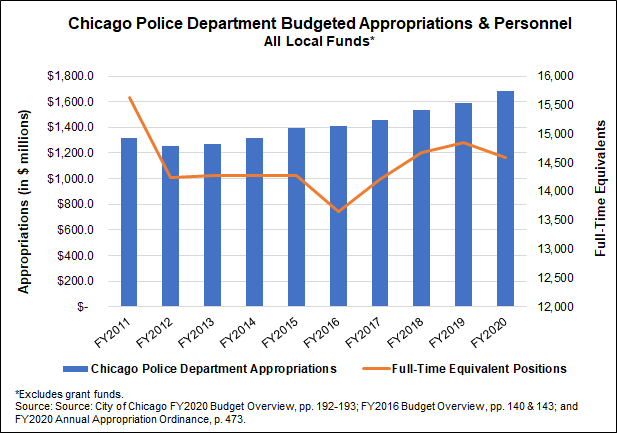 Public Safety Spending in Context of the City’s Budget

To understand how Chicago’s police spending compares to spending on other areas of City services and functions, it is helpful to look at the Police Department and Public Safety within the context of the City’s budget as a whole. The chart below shows the FY2020 appropriations by function, excluding grant funds.

The other largest spending areas in the total City budget include: 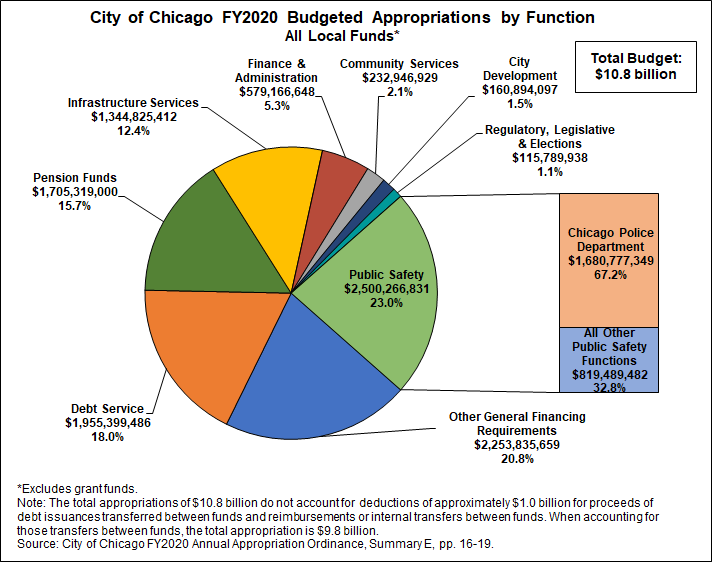 The next chart shows the distribution of budgeted appropriations across all City functions between 2000 and 2020. The total City budget for all local funds (excluding grant funds) in FY2000 was $4.7 billion. Since then, the budget has increased steadily, with the largest jump occurring between FY2015 and FY2020. The City’s total budget has increased by 128.7% in the twenty-year period since FY2000. By comparison, inflation was 43.6% during the same period for the Chicago region. 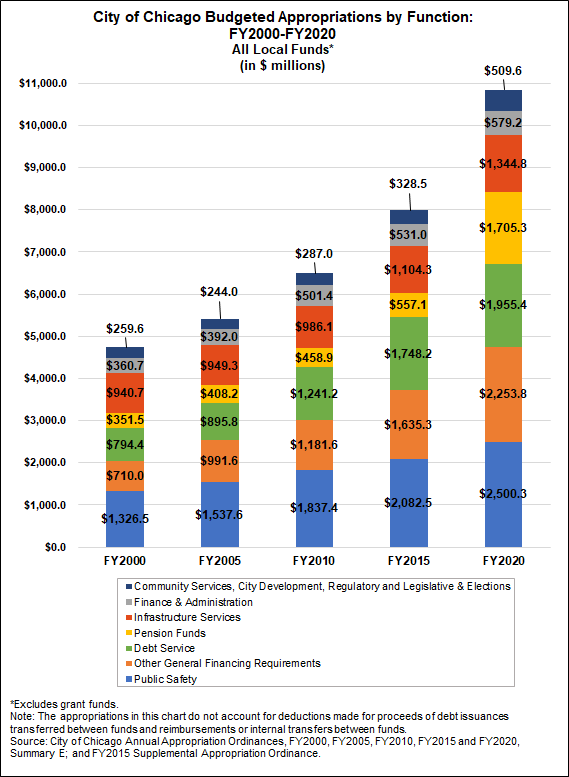 [1] Full-time equivalent (FTE) positions are used as a way to measure workload, rather than headcount, to ensure that workloads are comparable across various contexts. FTE is calculated by dividing total hours worked by the average annual hours worked in a full-time position.