UPDATE: The City of Chicago released its Annual Financial Analysis for 2017 on July 31, 2017. The online content included with the report includes two years of projections of the City’s actuarially calculated contributions under the new funding schedule for the Municipal and Laborers’ Funds after the end of the five-year ramp. Note that the years in the chart are levy years and refer to contributions that will actually be made in the following fiscal year.

Included in the budget legislation approved by the Illinois General Assembly over the veto of Governor Bruce Rauner earlier this month were provisions to change the way the City of Chicago must fund two of its four pension funds. The changes, which will gradually and significantly increase the amount of funding Chicago taxpayers must contribute to the Municipal and Laborers’ Funds, are intended to prevent the imminent insolvency of both funds. An actuarial projection of whether the increased funding will prevent further deterioration in pension funding levels has not yet been made publicly available but if the previous contribution schedule had continued, the Municipal Fund was projected to become insolvent in 2025 and the Laborers’ Fund in 2027.

This blog post will provide an overview of how the changes became law and a summary of the provisions included in the legislation.

Prior to the passage of Public Act 100-0023, the City’s annual pension contributions to the Municipal and Laborers’ Funds were set in state statute as a multiple of employee contributions made two years prior. The multiple used for the Municipal Fund was 1.25; this means that annually the City contributed 1.25 times the amount of employee payroll deductions made two years prior to the Fund. The corresponding multiple for the Laborers’ Fund was 1.0. These multiplier contributions do not adjust according to the actual cost of providing the benefits, so even though the City has made its required contributions under state law, they have been insufficient for the actual needs of the Municipal and Laborers’ funds for many years. Statutory underfunding is one of the biggest contributors to the funds’ huge unfunded liabilities, which the new funding plans are intended to address.

In 2014 the State of Illinois passed pension reform legislation that would have increased Chicago’s funding schedule, in addition to reducing certain pension benefits for current employees and retirees. However, the Illinois Supreme Court in March 2016 struck down the law as unconstitutional, returning the Municipal and Laborers’ Funds to the woefully inadequate multiplier funding standard.

In the months after the Supreme Court ruling, the City of Chicago announced that it had come to an agreement in principle with labor for a new 40-year funding schedule for both the Municipal and Laborers’ Funds, to be paid with a new water-sewer usage tax on consumers and a 911 surcharge, respectively. The plan also included a new tier of benefits for new hires. However, the changes required action by State lawmakers to amend pension statutes, which control benefit levels and employer contributions. Legislation to implement the changes was introduced and passed by both houses of the General Assembly in the lame duck session in January 2017, but was vetoed by the Governor in March 2017. The Governor in his veto message said that the bill was not the comprehensive statewide pension reform he wanted and he believed it would result in tax increases for Chicago residents. Since a new General Assembly had convened, a veto override was not possible. An identical version of the bill was introduced in the new General Assembly and again passed both houses, but was held in a parliamentary maneuver from being released to the Governor for his consideration.

As noted above, the pension funding changes became law when the legislation was included in Senate Bill 42 (now Public Act 100-0023), the budget implementation bill for FY2018 that was passed over the Governor’s veto earlier this month.

The employer funding provisions for the Municipal and Laborers’ Funds laid out in P.A. 100-0023 are similar in structure to those already in effect for the City’s Police and Fire Funds. The increased contributions to the Police and Fire Funds are funded by a multi-year increase in property taxes. All four funds now have five years of increasing payments and then another 35 years of actuarially calculated annual payments to raise the funded level to 90% for a total 40-year funding plan. This five-year ramp to a 35-year plan to 90% funded was also the outline of the funding plan included in the Municipal and Laborers’ pension reform legislation that was struck down by the Supreme Court. 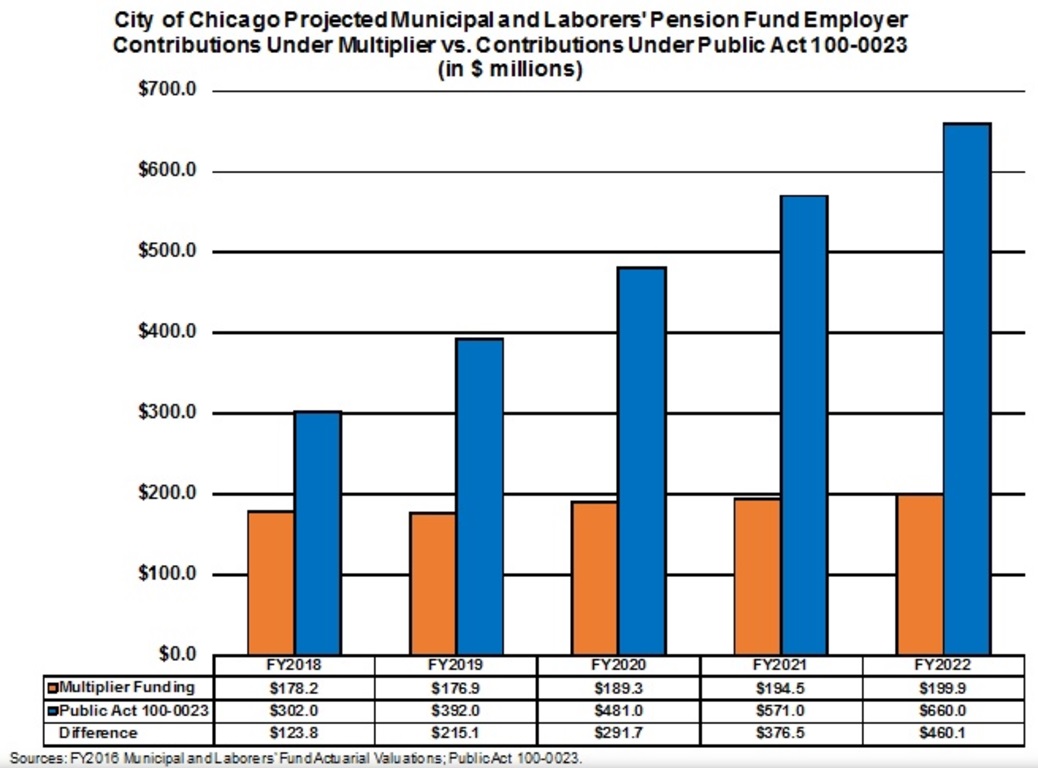 It is important to note that since the City’s contributions in FY2018-FY2022 are laid out in statute, they will not adjust should the funding needs of the pensions change due to lower than expected investment returns, changes in actuarial assumptions or other deviations from actuarial expectations. If the funds experience unfavorable results in the next five years compared to actuarial expectations, contributions will not compensate for those changes during the ramp and could possibly lead to a fall in funding levels. Additionally, the magnitude of the increase in funding that will be necessary in FY2023 when the City begins to fund at an actuarially-calculated level is currently unknown and no plan for funding that increase has been made public.

The experience of the Police Fund demonstrates the problems associated with inflexible pension funding. Since the new 40-year funding schedule was implemented for the Police and Fire Funds, the Police Fund has made changes to its actuarial assumptions and the Illinois General Assembly provided enhanced benefits in Public Acts 99-0506 and 99-0905. According to the Police Fund actuary, these changes increased the FY2016 pension liability by $1.23 billion and contributed to a fall in the actuarial funded ratio from 28.2% to 23.7%. In an actuarially calculated funding system, such a change to liabilities would require an increase in employer contributions in the next several years. However, since payments through FY2020 are laid out specifically in statute, the City will not immediately be required to start making increased payments to the fund to offset the increased liabilities. In fact, the fund’s actuary recommends that the City, “seriously consider making additional contributions (in excess of the minimum statutory requirement) to ensure that there are sufficient assets available in the fund in all years to pay the promised benefits.”

For the Municipal and Laborers’ Funds, neither the old statutory payment schedule nor the new payment schedule allowing 40 years to reach 90% funded with a five-year ramp are best practice funding schemes from an actuarial perspective. There is no best practice for an acceptable funded ratio other than 100%.[1] The Civic Federation understands the City of Chicago’s wish to increase its pension funding levels without overburdening residents, but it is important for all stakeholders to recognize that stretching payments out over 40 years and significantly backloading them means pushing more of the cost of today’s employees and retirees onto tomorrow’s taxpayers and impairs intergenerational equity.

The Civic Federation urges the City of Chicago, the Illinois General Assembly and the Municipal and Laborers’ Funds themselves to publicly release any actuarial studies that show how the funding levels of the Municipal and Laborers’ funds will be impacted by the legislation, especially once the ramp is over and actuarially-calculated funding begins in FY2023. It would be particularly helpful if better and worse case scenarios for funding were also explored so that the City and stakeholders understand what might happen to funding levels if fund experience strays from expectation.