Chicago area pension funds differ from pension funds for the other municipalities in this blog in that the City of Chicago and its overlapping governments like Cook County have independent pension funds. The pension funds for municipal, county, park district and most other government employees other than police and fire in Oak Park,[1] Oak Brook, Joliet, Rockford and Peoria are part of a larger statewide pension system, the Illinois Municipal Retirement Fund.[2]

Some of the governments examined in this blog were unable to provide complete unfunded pension liability data. The following is a list of unavailable data:

City of Peoria: Data for the City of Peoria does not include UAAL for the Peoria Pleasure Driveway and Park District for FY2002 through FY2011; and

The Civic Federation selected six municipalities in Northern and Central Illinois – Chicago, Oak Park, Oak Brook, Joliet, Rockford and Peoria – and calculated the total amount of unfunded pension liabilities owed by each resident. The per capita figures include the governments that overlap the municipality, such as counties, school districts, park districts and the State of Illinois.[3]

The Civic Federation collected audited financial statements for each municipality and overlapping government, including park districts, school districts, water and transit agencies, counties and forest preserve districts. Population data come from the United States Census Bureau and reported population from governments. To determine the total per capita figures, we made the following calculations:

Local Government Unfunded Pension Liability: Unfunded actuarial accrued liability of each government’s pension funds are reported in the audited financial statement for the government. To determine each municipal resident’s portion of county and forest preserve district UAAL, the total UAAL was divided by the county population and multiplied by the city population. Similarly, for the City of Chicago, UAAL for the Chicago Transit Authority (CTA) was divided by the CTA’s reported service population and multiplied by the City’s population. To determine the city’s portion of the school district’s UAAL for those districts that are part of the Teachers’ Retirement System (all school districts other than Chicago Public Schools), the UAAL for TRS is divided by the population of the State of Illinois and multiplied by the city population. Similar calculations were made for all the municipalities in this blog.

The chart below shows the UAAL per capita for six selected municipalities in Illinois – Chicago, Oak Park, Oak Brook, Joliet, Rockford and Peoria for fiscal years 2002 through 2011. The per capita figures below include UAAL for the local and overlapping governments and the State of Illinois. In FY2011, approximately $6,445 of each municipal resident’s UAAL is dedicated to the State’s UAAL. For City of Chicago residents, this equates to 24.6% of their $16,526 of unfunded pension liabilities. It is equal to 41.4% of UAAL per capita for Oak Park residents, 17.8% for Oak Brook residents, 47.9% for Joliet residents, 49.3% for Rockford residents and 44.1% for Peoria residents. 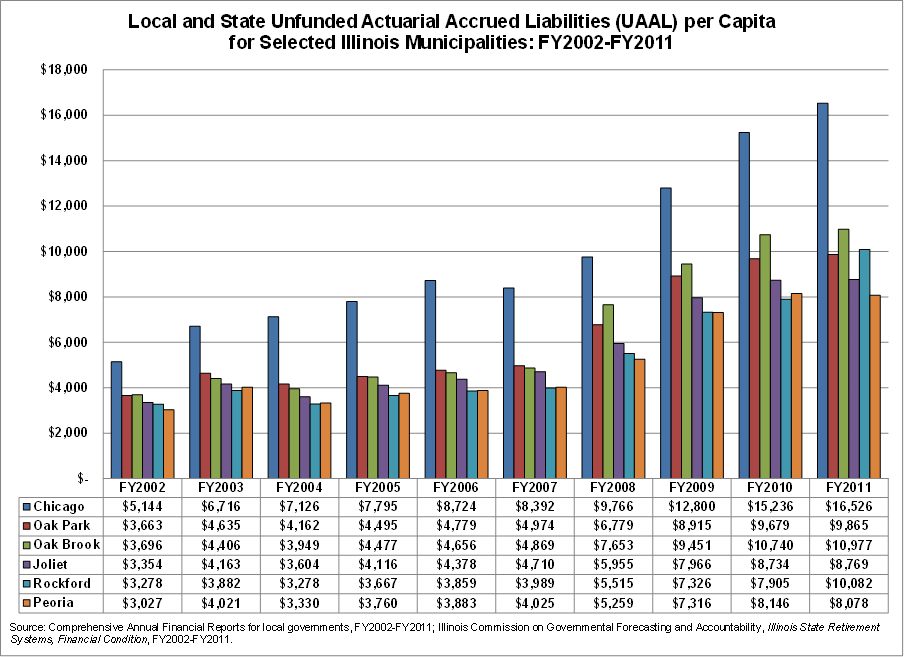 [1] Oak Park is in Cook County, so the County and Forest Preserve District of Cook County’s independent funds are included in its per capita calculation. However, Oak Park’s municipal employees belong to the Illinois Municipal Retirement Fund.

[2] There are 642 police and fire pension funds outside of Chicago in Illinois.