In addition, rating agencies and other financial analysts commonly monitor overlapping direct debt trends as an affordability indicator when governments consider debt issuance. The indicator reflects the premise that the entire population of a jurisdiction benefits from and bears the cost of infrastructure improvements or other long-term investments of all the governments authorized to issue debt on their behalf.

Some of the governments examined in this blog were unable to provide complete bonded debt data. Data for the City of Joliet does not include direct municipal debt or overlapping Joliet Special Service Areas debt for FY2002 through FY2005 because this information was not provided in Joliet’s audited financial statements.

The Civic Federation selected six municipalities in Illinois – Chicago, Oak Park, Oak Brook, Joliet, Rockford and Peoria – and calculated the total amount of debt owed by each resident. The per capita figures include the governments that overlap the municipality, such as counties, school districts, park districts and the State of Illinois.[1]

The Civic Federation collected audited financial statements for each municipality and overlapping government, including park districts, school districts, water and transit agencies, counties and forest preserve districts. Population data come from the United States Census Bureau and reported population from governments. To determine the total per capita figures, we made the following calculations:

Local Government Debt: Most municipal audited financial statements’ statistical sections include a report of direct and overlapping debt with the city’s portion of overlapping debt. Total local government debt can be calculated from this report and the final amount is divided by the city’s population for a per capita figure.

Between FY2002 and FY2011, Rockford residents experienced the largest percentage growth in debt per capita with a 382.4% increase from $664 per resident in FY2002 to $3,202 per resident in FY2011. The debt burden for Rockford residents more than doubled in FY2003 due to an increase in bonded debt on behalf of the State of Illinois. In FY2006 debt per capita nearly doubled again, this time due the City of Rockford’s issuance of General Obligation bonds for capital improvements and revitalization projects.[2] Rockford residents are responsible for debt from a number of school districts, the Greater Rockford Airport Authority, Winnebago County, the Winnebago County Forest Preserve District and the State of Illinois.

Residents of the City of Chicago experienced the largest dollar increase in the debt per capita indicator from FY2002 to FY2011. Chicago residents’ debt increased steadily each year from $4,446 per resident in FY2002 to $9,683 per resident in FY2011. Chicago residents share debt from many overlapping governments including Chicago Public Schools, Chicago Transit Authority and Cook County, as well as the State of Illinois. 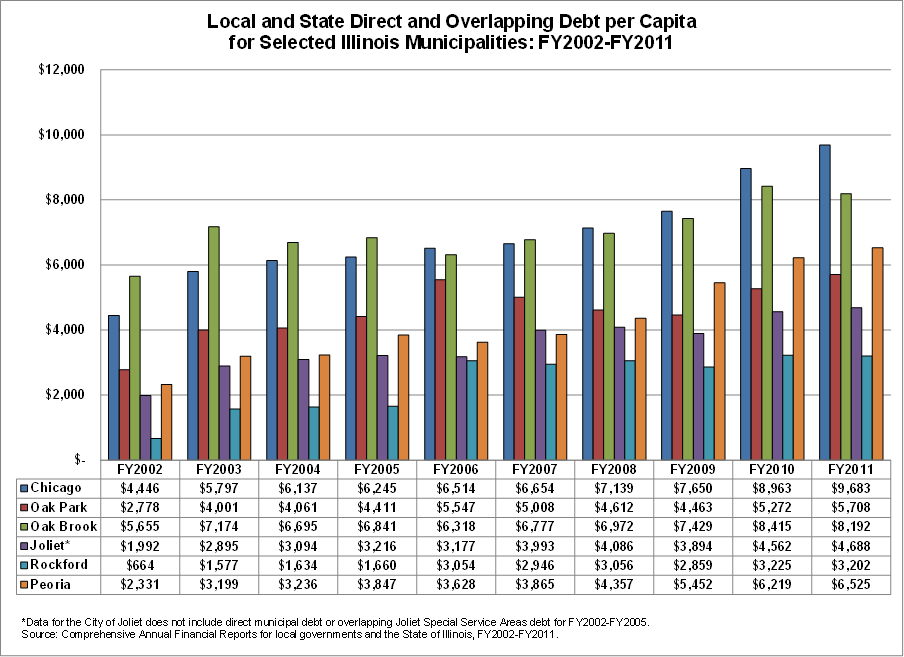 This blog was updated on September 9, 2013 to reflect revised debt data from the Village of Oak Brook for fiscal years 2008 through 2011.