The City of Chicago introduced the Mayor’s proposed FY2023 budget in early October, and the City Council will vote on a final budget in November. This blog post takes a look at what’s in the FY2023 budget proposal in the area of public safety spending. The Civic Federation is analyzing the budget as a whole and will release our complete analysis later this month.

The City of Chicago’s Public Safety departments include the following seven departments:

Together, these offices make up the public safety program area within the Chicago budget. The other program areas of the City budget are: infrastructure services; finance and administration; community services; regulatory; legislative and elections; and city development. The graph below shows the amount of proposed spending for public safety compared to other program areas of spending in the proposed City of Chicago FY2023 budget across all local funds (excluding grant funds).

Public safety, General Financing Requirements and pension funds each account for approximately $2.7 billion. Debt service accounts for 17.9% of the City’s proposed FY2023 appropriations at $2.4 billion. The cost of pensions, debt and other General Financing Requirements have grown significantly over the years, and now together make up the majority of the City’s spending.

Departments within the Infrastructure Services program make up 11.6% of the City’s appropriations, or $1.5 billion. The City spends a much smaller portion of its budget on the following program areas: community services; city development; regulatory functions; and legislative and elections functions. 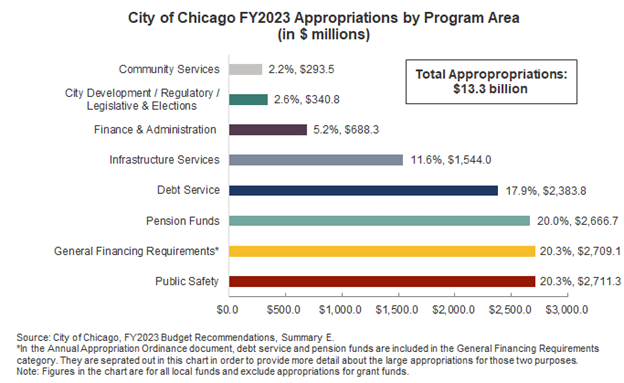 The Office of Emergency Management and Communications (OEMC) and the remaining public safety departments account for a much smaller portion of public safety appropriations.

OEMC’s proposed FY2023 budget is $77.8 billion, which represents 2.9% of public safety appropriations. Appropriations for the Office Public Safety Administration have increased significantly since its inception in FY2020 to $134 million in FY2023, representing 5% of public safety spending. Police oversight departments in the chart below include the Civilian Office of Police Accountability, the Police Board and the Community Commission for Public Safety and Accountability, which are grouped together due to the small size of their budgets in relation to the other public safety departments. 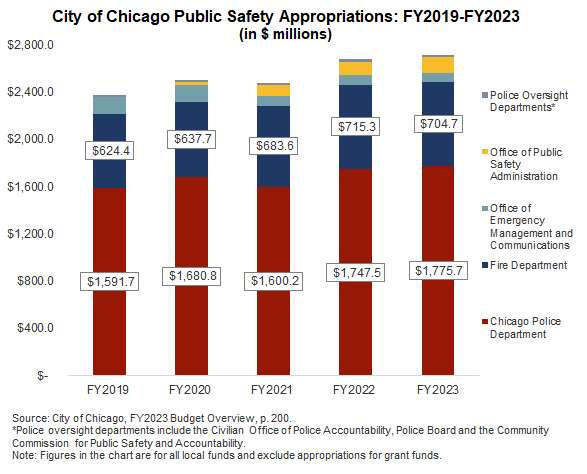 The following table provides the line-item details for appropriations in each public safety department over the five-year period from FY2019 to FY2023. Public safety appropriations over this five-year period will increase by $336.9 million, with the largest increases occurring in the Police Department and Office of Public Safety Administration. The Police Department budget is proposed to increase by $184.0 million, or 11.6%. The Office of Public Safety Administration was established in FY2020 with an initial partial-year budget of $30.6 million. It has since increased annually. The Office of Emergency Management and Communications budget has decreased by 45.8% between FY2018 and FY2022, mainly due to a shift in a large number of Chicago Public Schools crossing guard positions that the City previously funded, but were shifted to the Chicago Public Schools budget in 2021.

Public Safety accounts for the largest portion of personnel in the City’s budget, making up 59% of the total full-time equivalent (FTE) positions across all local funds. The Mayor’s FY2023 budget proposal includes a total of 20,625 FTE positions across all public safety departments. The Police Department represents the largest number of personnel, with 14,005 FTE positions proposed in FY2023. The Fire Department is budgeted for 5,134 positions. 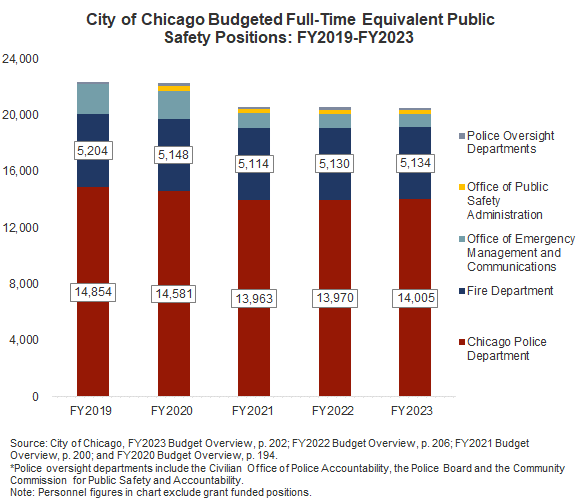 Line item details for budgeted personnel within each public safety department are shown in the table below. Over the five-year period from FY2019 through FY2023, personnel positions within the Police Department are decreasing by 849 FTEs, a decrease of 5.7%. The majority of that decrease within CPD took place between FY2020 and FY2021 due to the department eliminating vacant positions in order to produce budget savings in FY2021. The Office of Emergency Management and Communication (OEMC) also has seen a significant decrease in budgeted positions in the past five years—a decline of 1,166 FTEs, or 54.9%—900 of which were crossing guard positions transferred from the City of Chicago’s budget to the Chicago Public Schools budget in 2021.

For a look at the Civic Federation’s analysis of the City’s FY2022 budget, click here.

What Is the Chicago Police Department Budget?

How Flexible Is the Chicago Police Department Budget?