With the City of Chicago facing a $1.2 billion budget deficit heading into the next fiscal year and calls from community advocates for more funding for violence prevention and social services, the current situation begs the question of whether cuts can be made in the Police Department budget, and if so, where?

The Chicago Police Department budget adopted for the current 2020 fiscal year totals $1.76 billion. The majority, $1.65 billion, is accounted for in the Corporate Fund, which is the City’s general operating fund. Of that amount, 91%, or nearly $1.5 billion, consists of personnel costs. Within the personnel category, $1.2 billion, or 74.2%, is budgeted for salaries and wages and the other $274 million is for overtime and other personnel-related costs that are contractually required in collective bargaining agreements with the police unions.

The remaining 9.0% of the Police Department budget within the Corporate Fund is non-personnel spending. This includes $82.6 million budgeted for settlements and judgments, $19.0 million in non-workers’ compensation medical costs, and smaller allocations for a number of different line items such as supplies, equipment, information technology, and contractual services. Non-personnel spending approved in FY2020 totals $148 million.

It is important to note that the cost of employee healthcare and other benefits are not budgeted as part of the Chicago Police Department budget. Those employee benefit costs are budgeted for separately in a cross-departmental Finance General category.

The Chicago City Council dug into the details of the Police Department budget at a joint meeting of the Budget and Government Operations and Public Safety Committees held on September 17. City Council members heard from the City budget director, the Deputy Mayor for Public Safety and Council Office of Financial Analysis Director Kenneth Williams about what changes can or cannot be made in the police budget and proposals for cost reductions that would require changes in the contractual requirements in collective bargaining agreements with the police unions. Budget Director Susie Park explained that almost all of the Police Department’s personnel spending is directly tied to collective bargaining agreements. Line items including uniform allowance, compensatory time, furlough/comp time buy back, specialty pay, tuition reimbursement and supervisors’ quarterly pay are all contractually obligated through collective bargaining agreements. Reimbursable overtime is a reimbursement from the Chicago Transit Authority and the Park District for security provided to those agencies and salary adjustments account for step increases, which are automatic pay rate increases after certain periods of time on the job.

Salaries and wages totaling $1.2 billion are based on the number of employees within the Police Department and the salary schedules set in collective bargaining agreements. Approximately 10,000 of the 14,000 Police Department personnel are police officers with an average salary of $82,935.

Overtime was budgeted at $91.4 million in FY2020, but Budget Director Park said the City expects actual overtime costs to be much higher, reaching $140 million due to the need for additional officers on duty to respond to social unrest and looting incidents over the summer.

The majority of non-personnel costs are not adjustable, Budget Director Park explained. Legal settlements and judgments account for the largest portion of non-personnel and the remainder of line items are small enough that adjustments, she said, would not make a significant impact in the Police Department budget. 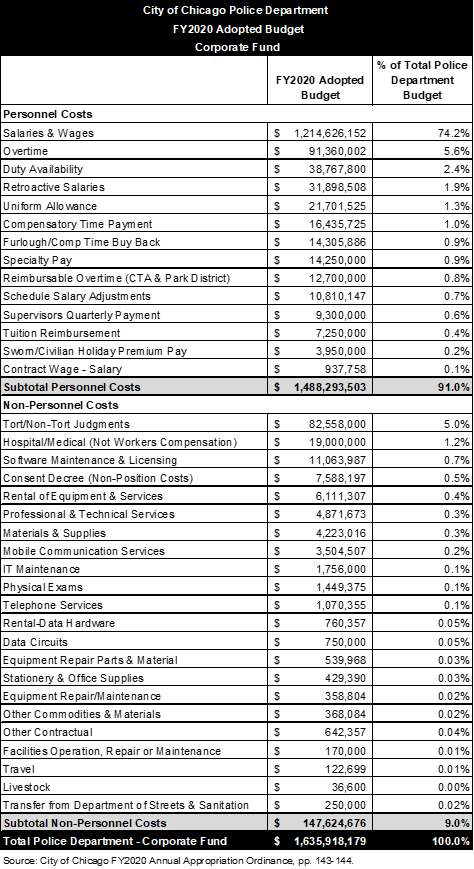 Making any real cuts in the Chicago Police Department would require systemic changes. Despite the inflexibility, where can cuts be made? Several options were discussed during the September 17 joint committee meeting.

Eliminate Certain Compensatory Perks from Collective Bargaining Agreements: Contractual obligations could be negotiated out of future agreements with the Fraternal Order of Police and Policemen’s Benevolent & Protective Association. Not including salaries and wages, overtime and retroactive pay, the City could cut $125 million in personnel costs by eliminating multiple personnel line items contractually obligated through collective bargaining agreements.

Based on the existing police contract with the Fraternal Order of Police, police officers are eligible for benefits in addition to their salaries such as the following:

The City could work to eliminate perks like the quarterly payments police officers and supervisors receive and reduce the uniform allowance based on need.

At the September 17 joint committee meeting, the Council Office of Financial Analysis suggested eliminating $54 million from the Police Department budget in the Corporate Fund by eliminating specialty pay, supervisors’ quarterly payments, uniform allowance, specialty reimbursement and physical exams (which COFA suggested should be covered through health insurance). Similar eliminations on a smaller scale could be made in the airport funds for police officers assigned to O’Hare and Midway Airports.

However, Budget Director Park said eliminating these line items would be unlikely in the current negotiations with the Fraternal Order of Police to renew the police contract that expired in 2017, given that the City has already reached an agreement with the Policemen’s Benevolent & Protective Association (CBPA) for police supervisors (sergeants, lieutenants and captains) that contains those benefits. In order to make any real reductions in personnel line items, the FOP and CBPA would need to make concessions.

Eliminate Vacancies: Eliminating vacant positions is one way to reduce personnel while avoiding layoffs. At the time of the committee hearing on September 17, the City had 847 vacant positions within the Police Department. Violence prevention programs such as Chicago CRED suggest that the elimination of these empty positions could free up $150-200 million for reallocation to violence prevention.

Eliminate Positions through Attrition: Another way to eliminate positions without layoffs is by not filling the positions of people who leave the Department. Budget Director Park said an average of 475-500 employees retire from the Police Department each year.

Find Efficiencies Within Personnel Structure: With salaries making up 74% of the Police Department budget, this area of spending has the most room for adjustment. While salaries and other forms of compensation are codified in collective bargaining agreements, there is no requirement in the agreements for a minimum number of officers the Police Department must employ.

Chicago has among the highest number of police officers per capita in the U.S. Following a surge in hiring in response to an increase in gun violence in 2016, the number of Police Department employees increased from 13,649 budgeted in FY2016 to 14,854 positions budgeted in FY2019. This represents a 9% increase of about 1,200 police officers. With the large number of officers, the Police Department should be continually examining how efficiently it is using existing resources.

The City has implemented some significant restructuring in efforts to civilianize administrative functions and reorganize the Department for better coordination and internal communication. The Police Department announced a significant reorganization in January 2020 intended to bring department functions in line with national best practices and streamline operations. Additionally, the City created a new Office of Public Safety Administration in FY2020 to combine human resources, information technology and logistical functions of the Police Department, Fire Department and Office of Emergency Management and Communications. The City says the creation of the office allowed for 160 officers to be redeployed from office jobs to street patrol. These appear to be promising initiatives that will improve efficiency, but have not yet been shown to result in significant savings. With such a large staff, the City budget office and Police Department budget office should continually be looking for areas where cost savings be achieved.

Overtime: Overtime costs in the Police Department have been problematic over the years, often exceeding their budgeted allocations. This year, overtime is expected to be $50 million over budget due to COVID-19 and social unrest. Soon after being hired by the City, Police Superintendent David Brown implemented new controls in the overtime approval process. In addition to accountability measures, good management and utilization of staff should reduce the need for expensive overtime pay.

Settlements and Judgments: Payments for judgments and outside counsel related to police lawsuits have been extremely costly to the City over the years. Only recently did the City begin budgeting for settlements and judgments within the Police Department budget, making it easier to track these costs. Police accountability measures will be critical to reducing lawsuits and associated legal costs going forward.

Immediate options for reducing Police Department costs would involve cutting the number of positions, while more systemic changes could take years to realize. Mayor Lori Lightfoot will present a proposed FY2021 budget and plan for addressing the deficit on October 21 for the fiscal year that begins on January 1. The Civic Federation looks forward to learning about what measures will be proposed to reduce costs and continue efficiencies in the FY2021 budget.