Evanston voters overwhelmingly approved a non-binding advisory referendum to dissolve Evanston Township in the March 20, 2012 election. Election results show that 66.9% of voters supported the measure while 33.0% opposed it. Legally dissolving the township will require action by the General Assembly.

In October 2011, the Evanston City Council voted 5-4 to submit the question of abolition to a vote and to lobby the General Assembly for legislation that would eliminate the township and transfer its functions to the municipal government.

The City of Evanston has gradually assumed most of Evanston Township’s functions over time. The principal argument for completely eliminating the township and absorbing its functions into the city government was that the action could save taxpayers hundreds of thousands of dollars as duplicative administrative functions were eliminated. Opponents, however, expressed concern that important services might be reduced or eliminated in a city takeover.

Eliminating a unit of local government in Illinois is rare. On the same day that Evanston voters resoundingly indicated their support for dissolving Evanston township government, voters in Stickney Township narrowly opposed abolishing the township’s road district by a vote of 50.4% to 49.6%. However, elimination of government units does happen from time to time.  In 2007 the Suburban Cook County Tuberculosis Sanitarium District was dissolved after the Civic Federation presented evidence of the District’s inefficient, duplicative and costly operations in a policy report.

While the exact nature of their responsibilities can vary, Illinois townships typically have three functions:

Cook County township assessors no longer assess property as that function has been transferred to the Cook County Assessor’s Office. They do, however, provide information to citizens about the assessment process and can assist taxpayers in seeking property tax exemptions and appealing their assessments.

There are currently 30 townships in Cook County. Chicago eliminated the township governments within its boundaries and transferred their functions to the city government in a 1902 referendum authorized by the General Assembly. The Civic Federation was instrumental in collecting the signatures required to place the township elimination question on the municipal ballot [1].

Evanston Township is one of four in Cook County that have coterminous boundaries with a municipality; the others are Berwyn, Oak Park and River Forest. Cicero is a unique jurisdiction, the only township in Illinois that also operates as a “town,” i.e., a municipal government. Berwyn, River Forest and Oak Park Townships elect a supervisor, assessor, clerk and boards of trustees while Evanston Township elects only a Supervisor and an Assessor. The Evanston City Council acts as the Township Board. For more about township government in Cook County, read the Civic Federation three part blog series “Cook County Township Government FAQs” part 1, part 2 and part 3.

Illinois: The Most Local Governments in the Nation

Evanston’s vote to begin the process of dissolving its township is likely to renew debate about Illinois’ extraordinary number of local governments and whether they are an efficient mode of service delivery in the 21st century.

According to the U.S. Census Bureau, the Prairie State had 6,994 units of local government in 2007, more than any other state. The states with the second and third largest number of local governments are Pennsylvania with 4,871 governments and Texas with 4,835. Approximately 46.5% of Illinois’ local governments are special districts, such as park districts or library districts. These governments provide limited, special services and in many counties are subject to the Property Tax Extension Limitation Law (PTELL) which limits increases in property tax levies to 5% or inflation, whichever is less. 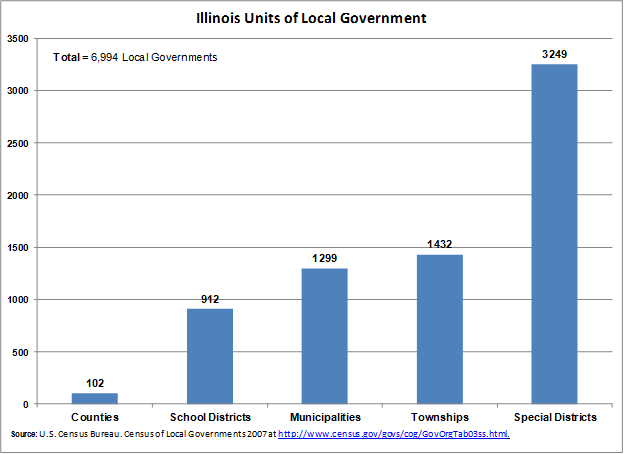 Unlike other states where many of these services might be provided by a municipal or county government, Illinois historically has opted to create a plethora of these special districts to provide many public services. The primary reason for the multiplicity of special districts is that the 1870 Illinois constitution had strict borrowing limits, which made it difficult for municipalities to fund capital expenditures. Special districts were created as a way to circumvent those limits and finance infrastructure. The 1970 Constitution lifted the restrictions in part, but the governments that were created previously still remain for the most part [2]. There have been discussions about eliminating units of local government since then, including intermittent calls for the dissolution of certain township governments, Governor Pat Quinn’s proposal to establish a commission to discuss the consolidation of school districts in his 2011 Budget Address and current legislation co-sponsored by State Senators Cullerton and Noland that would permit the elimination of township assessors and highway commissioners.

[2] Rachel Wells, Illinois Issues, “Taxing districts: Illinois has more than any other state,” May 2010 at http://illinoisissues.uis.edu/archives/2010/05/taxdistricts.html