The third and final part of the Civic Federation’s Frequently Asked Questions about township government in Cook County presents basic information about township government finances using FY2007 audited financial statements. The FAQ does not include information about the Town of Cicero, which is difficult to compare to other Cook County townships because it operates as both a township and a municipality.

Please click here for Part 1 and Part 2 of the FAQ.

For the purposes of this FAQ, the Civic Federation aggregated and compared data for the 24 Cook County townships with comparable data. Townships with comparable data are those that reported their FY2007 Financial Statements in modified accrual accounting and did not have a memorandum only total for governmental funds. Five townships were excluded under this comparison criterion. Townships with comparable data include all townships except the Townships of Norwood Park, River Forest and Worth, which had memorandum only totals for governmental funds in FY2007; Barrington Township, which presented its FY2007 Financial Statements in the cash basis of accounting; and Elk Grove Township, which presented its Financial Statements in the cash with assets method of accounting.

What are the Cook County townships’ major sources of revenue?

Townships primarily fund their governmental operations from tax revenue, particularly property taxes and personal property replacement taxes.[1] Townships also receive funding from investment income, grants and other sources. Townships with comparable data in FY2007 had total revenues of $86.8 million. The majority of revenue, approximately 81.1%, came from property taxes. The second largest revenue source was the personal property replacement tax, which made up 6.8% of total revenues. The third largest revenue source was revenues from other sources, which constituted 5.9% of total revenues. Investment income and grants made up the smallest share of revenue, making up 3.8% and 2.4% of total revenues, respectively.  The following table summarizes FY2007 revenues by source for Cook County townships with comparable data. 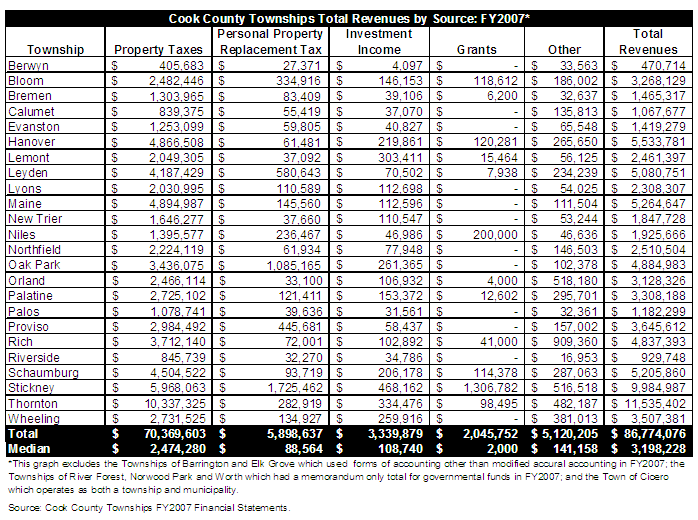 How much do Cook County townships spend? 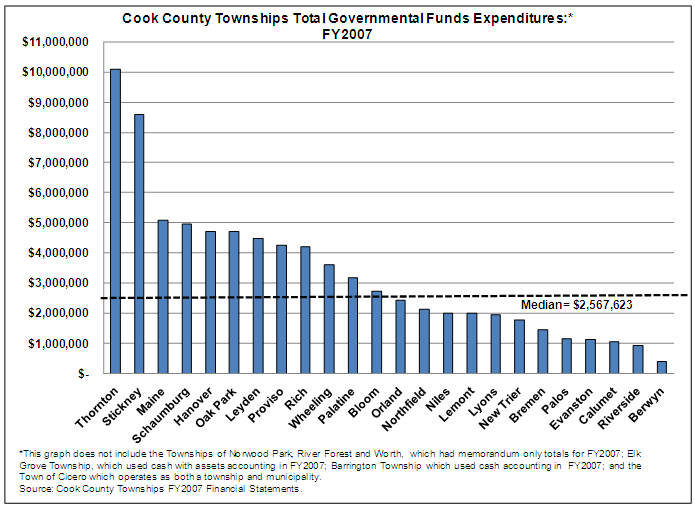 How large are township fund balances?

Cook County township fund balances, a measure of the financial resources available in a governmental fund, vary in size but tend to run high. The Civic Federation examined fund balances in the townships’ General Funds, because resources in these funds are not restricted for any specific purpose. The resources in other township special purpose funds, such as funds for General Assistance and Roads and Bridges, are restricted for those purposes. 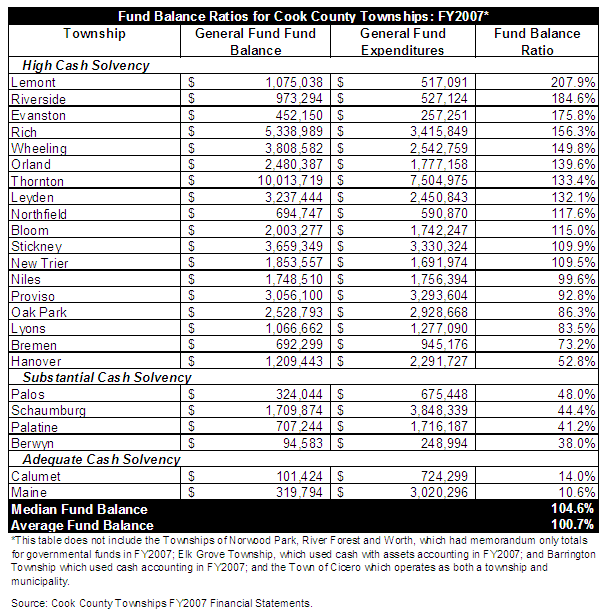 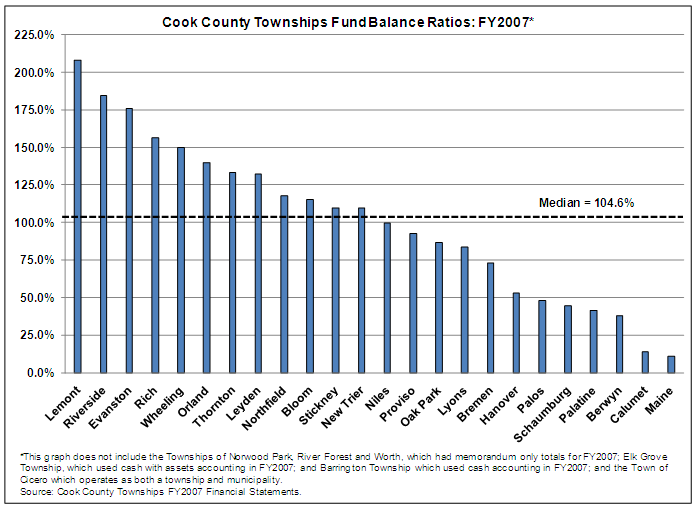 [1] Replacement taxes are revenues collected by the State of Illinois and paid to local governments to replace money that was lost by local governments when their powers to impose personal property taxes on corporations, partnerships, and other business entities were taken away. These taxes were the result of the new Illinois Constitution’s instruction to the legislature to abolish business personal property taxes and replace the revenue lost by local government units and school districts. In 1979, a law was enacted to provide for statewide income taxes to replace the monies lost to local governments. This definition was taken from the Illinois Department of Revenue website. For more information about PPRT please see: http://www.revenue.state.il.us/LocalGovernment/Overview/HowDisbursed/replacement.htm
[2] Government Finance Officers Association, “Appropriate Level of Unrestricted Fund Balance in the General Fund,” October 2009, p. 2, http://www.gfoa.org/downloads/AppropriateLevelUnrestrictedFundBalanceGeneralFund_BestPractice.pdf.