As part of the $45 billion capital bill passed by the Illinois General Assembly in early June 2019, and pending the Governor’s signature, the State’s tax on cigarettes and e-cigarettes will increase starting on July 1. The State of Illinois tax on cigarettes will increase by $1.00 from $1.98 per pack of 20 cigarettes to $2.98 per pack. The State will also start imposing a new 15% tax on the sale of electronic cigarettes. These hikes are estimated to bring in $156 million for the State annually and the revenue generated will go into the Capital Projects Fund to pay for non-transportation infrastructure projects.

At a rate of $1.98 per pack, Illinois’ tax on cigarettes was the 20th highest state tax in the country, but the $1.00 increase will put Illinois in the top ten.

The increase also puts Chicago among the highest local composite cigarette tax rates in the U.S. The State increase will bring the total cigarette tax in the City of Chicago to $8.17 per pack. This composite rate is a combination of taxes imposed by governments at the federal, state, county and city level, as shown in the table below.

The tax rate on liquid nicotine products, or e-cigarettes, purchased in Chicago will now consist of local tax of $1.40 per milliliter of liquid and $1.50 per unit, plus the State’s 15% tax on the wholesale price of both liquid nicotine and devices used for consumption. This is the first time the State of Illinois will impose a tax on e-cigarettes. The City of Chicago and Cook County have both taxed liquid nicotine products since 2016. The City and County impose their taxes on cigarettes and other tobacco products through their status as home rule units of government.

The table below shows the composite tax rates imposed in the City of Chicago on each type of tobacco product, including the rates charged by each taxing body. 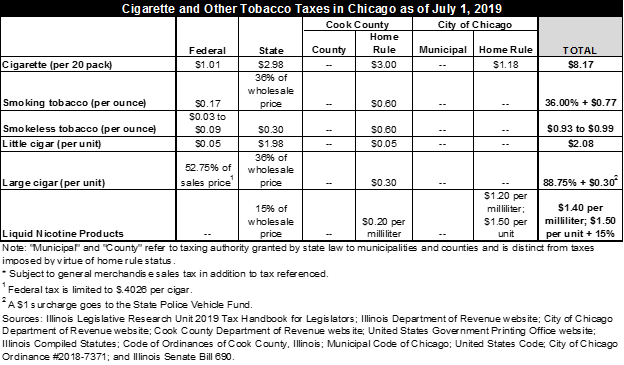 Cigarette taxes in Chicago and Cook County have been a decreasing source of revenue over time as a result of a declining consumption trend, as well as the City of Chicago increasing the minimum age to purchase tobacco products from 18 to 21 in 2016. The amount of revenue generated by the City’s taxes on cigarettes and other tobacco products has declined over the past several years from $24 million in FY2014 to an estimated $18.9 million in FY2019.

Cook County’s current-year budget projected that the County’s cigarette tax revenue would decline over the next five years from $120.0 million in FY2019 to $89.4 million in FY2023. Based on mid-year projections, the County now estimates that cigarette tax revenue at year-end in FY2019 will be $110.7 million, and is forecasting revenue of $107.0 million in FY2020. In addition to historical trends in reduced consumption, the anticipated decline accounts for the passage of State legislation in April 2019 raising the age to purchase tobacco products from 18 to 21 statewide. The County’s latest five-year projections expect revenue from other tobacco products including e-cigarettes to remain fairly level over the next five years at about $7 million.

The Civic Federation produces an annual consumer taxes report with additional details on tobacco taxes and other consumer taxes in the City of Chicago.

Increases and Changes to Consumer Taxes in Chicago for 2019

Selected Consumer Taxes in the City of Chicago - 2019