The City of Chicago’s FY2016 budget originally included a tax on liquid nicotine products at the rate of $1.25 per product unit, plus an additional $0.25 per fluid milliliter of liquid nicotine product. However, an ordinance was introduced following approval of the budget amending the tax to reduce the per product unit rate from $1.25 to $0.80 and increasing the per fluid milliliter rate from $0.25 to $0.55. The tax on liquid nicotine products went into effect January 1, 2016 and is projected to generate $1.0 million in additional revenue this fiscal year, which is the same amount as the original ordinance that passed as part of the budget process. The City of Chicago is the first major U.S. city to tax electronic cigarettes.[1] 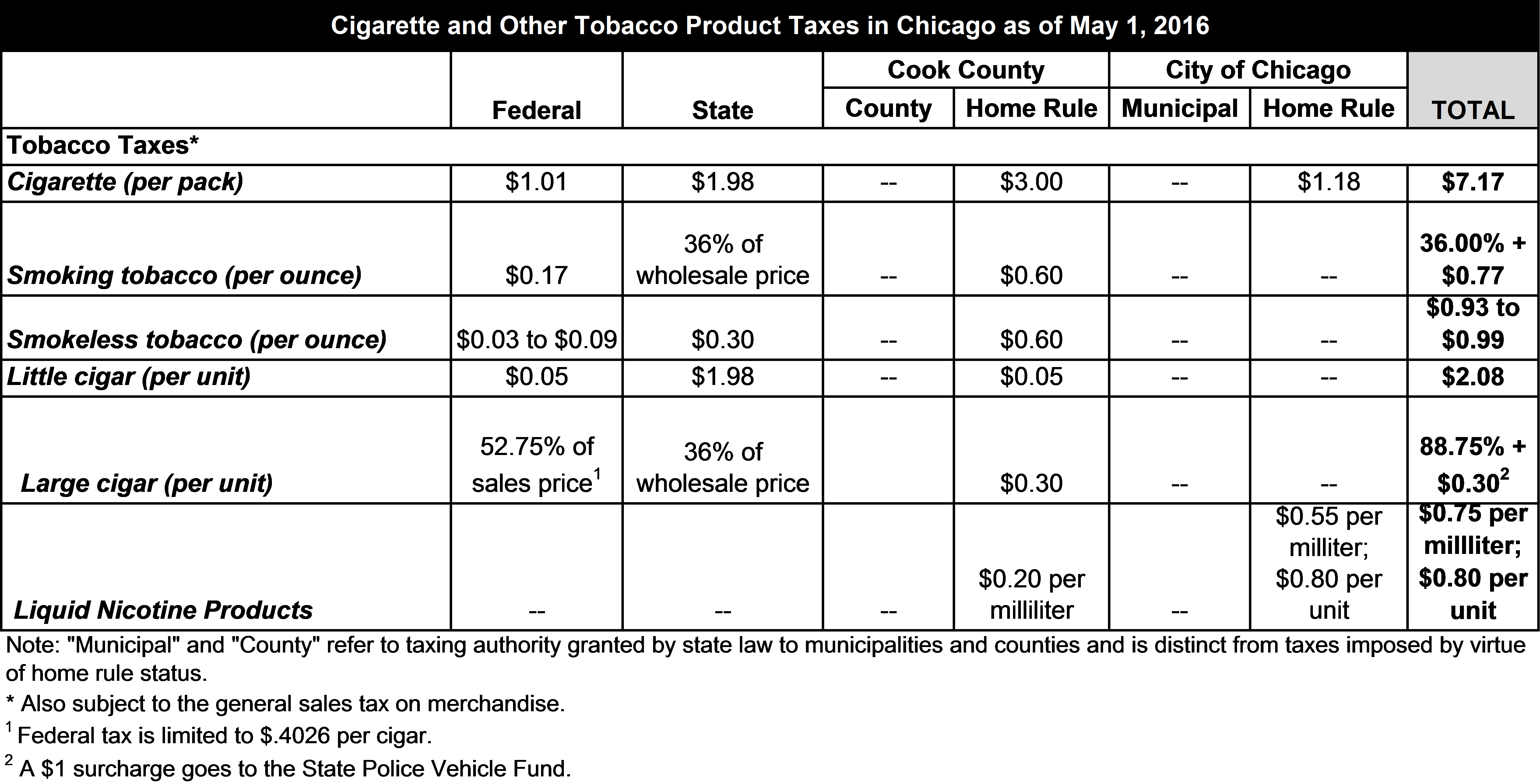 Historical Changes to Cigarette and Other Tobacco Product Taxes

Federal, state and local governments also tax other tobacco products as described below. Cook County began taxing these products effective March 1, 2012. As of January 1, 2013, County taxes on tobacco include $0.60 per ounce of smoking tobacco and smokeless tobacco, $0.05 per little cigar and $0.30 per large cigar.

The City of Chicago does not currently tax other tobacco products, such as those currently taxed by Cook County. However, Ordinance 2016-105 was introduced to the Chicago City Council on January 13, 2016 which would begin taxing other tobacco products and also includes additional regulations. On February 8, 2016 the Finance Committee debated the ordinance with some alderman raising concerns about the proposed ordinance. The Finance Committee went into recess and reconvened on February 10, 2016 with a substitute ordinance, which was ultimately recommended for passage. On the same day, a procedural move was made to defer and publish the ordinance, delaying action until the March Council meeting.

The State of Illinois imposes a tax on the wholesale price for non-cigarette tobacco products. Effective July 1, 2012, the State tax on the wholesale price for non-cigarette tobacco products increased from 18.0% to 36.0%. Effective August 1, 2012, roll-your-own cigarette machine operators are required to pay an annual license fee of $250. While this fee is not a consumer tax, the additional cost may be passed onto consumers. Cigarettes sold by roll-your-own establishments are also subject to the State’s regular cigarette tax of $1.98 per pack. As of January 1, 2013, moist snuff tobacco products are taxed at $0.30 per ounce. Previously, moist snuff was taxed at its wholesale price and categorized under smokeless tobacco.

The sale of other tobacco products is also subject to the sales tax on general merchandise.

As noted above, the City of Chicago is considering imposing a new tax on other tobacco products, as well as additional regulations.

In summary, the proposed substitute ordinance would:

The proposed ordinance is projected to generate approximately six million dollars in new revenue, which would be earmarked for Chicago Public Schools high school orientation program.

The Federation will continue to monitor the proposed ordinance and provide additional information as it becomes available.

To read more on many of the other consumer taxes imposed on Chicago residents and visitors, you can access the Civic Federation’s 2016 Selected Consumer Taxes in the City of Chicago report here.