Despite large revenue losses associated with the economic downturn caused by COVID-19, Cook County’s preliminary 2020 budget results for the fiscal year that ended on November 30, 2020 show a positive year-end balance. Based on the monthly report provided by the Cook County Bureau of Finance to the Cook County Board of Commissioners, the County expects to end the year with a positive balance of $154.7 million in the General Fund and $259.2 million in the Health Fund on a budgetary basis. This does not include encumbrances, which is money obligated for the fiscal year but not yet spent or received. The results are preliminary. The General Fund and Health Fund compose the County’s operating funds. The General Fund accounts for administrative and public safety operations and Health Fund accounts for the health and hospitals system run by the County (known as Cook County Health).

These year-end budget results are vastly better than the results the County was anticipating at the mid-year point during FY2020. Cook County’s preliminary forecast for year-end FY2020 anticipated a budget deficit of $219.7 million in the General Fund and $60.6 million in the Health Fund, for a total operating deficit of $280.2 million in the two funds combined. General Fund revenue was projected to end the year $297.2 million below budget. However, the County now anticipates that loss in revenue to be significantly less at $175.3 million. The revenue loss is offset by favorable expenditures compared to budget, resulting in a positive year-end balance in the General Fund.

The revenue decline of $175.3 million compared to budget in the General Fund is driven by losses in almost every category of non-property tax revenue. The majority is a $127.5 million loss in sales tax revenue, which is 15.0% below the budgeted sales tax amount originally projected when the 2020 budget was approved in November 2019. Other tax sources that came in significantly below budget include the amusement tax, parking lot and garage operations tax, hotel tax and gas tax. However, cigarette tax revenue is ending the year much higher than budgeted due to two large enforcement settlements that resulted in $59 million for Cook County. This influx in cigarette tax revenue also contributes to the smaller than expected revenue loss in the General Fund.

The General Fund revenue loss is offset by a $330.0 million favorable expense variance compared to budgeted expenditures. Expenditures were $330.0 million below budget largely due to reimbursement of Coronavirus Relief Fund (CRF) funding to departments. As part of the federal CARES Act, the County received relief funds that could be used to cover eligible COVID-19-related expenses. Credits were applied to departments with reimbursable expenses in November. The majority of reimbursements—$200 million—were for labor expenses distributed to the Sheriff’s Department of Corrections, Community Corrections and Police Department, the Medical Examiner’s office, and the Juvenile Temporary Detention Center.

In the Health Fund, revenues are expected to be $269.8 million higher than budgeted due to stronger than anticipated collections in CountyCare payments because of higher CountyCare membership, a shift in timing for BIPA (Benefits Improvement and Protection Act) revenue based on a revised agreement with the State of Illinois, and $153.4 million in CARES Act funding. However, it was brought to the Cook County Health Finance Committee’s attention at its October 23, 2020 meeting that $50 million to $100 million of the $153.4 million received under the CARES Act might have to be repaid because of a revised government interpretation of how revenue loss is calculated. According to the 2020 year-end finance report, Cook County Health is reviewing the evolving guidance on the use of these funds to determine any needed repayment.

Expenditures in the Health Fund are expected to be $10.6 million over budget (before additional encumbrances of $32.0 million) due to higher than budgeted expenses at Stroger Hospital and Cermak Health Services. These expenses are primarily due to personnel costs and Managed Care claims.

The preliminary year-end 2020 budget results are shown in the table below. 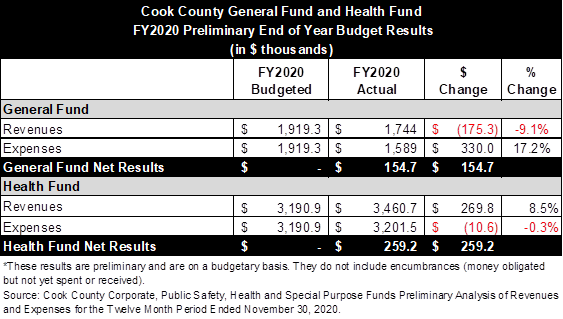