CPS enrollment has been declining steadily for at least the past decade while personnel spending has increased dramatically. In a recent analysis of the Chicago Public Schools proposed FY2022 budget, the Civic Federation raised concerns over this ongoing trend. The Federation specifically pointed to a 13% increase in the District’s operating budget, which is primarily due to an influx of $2.6 billion in federal COVID-19 relief funding. Of that funding $1.06 billion will be used in FY2022. The FY2022 budget includes significant investments in personnel that will be ongoing positions after federal funding dries up in 2024. At the July 28 Board of Education meeting, when the Board approved the budget, several Board members echoed the Federation’s concerns and calls for long-term financial planning.

The chart below shows the decline in student enrollment in the ten years between FY2012 and FY2021. FY2021 is the most recent year for which data are available, as FY2022 school budgets are based on fall 2020 (fiscal year 2021) enrollment. During that ten-year period CPS lost 63,493 students, or 15.7% of the student population. Enrollment fell from 404,151 students to 355,156 students. FY2021 was the largest drop during this period, with a year-over-year decline of 4.5% from FY2020 enrollment levels. Preschool enrollment has declined significantly to about half the level in fall 2020 as it was ten years prior. High school enrollment has seen the smallest decline at a loss of 7.6% over the ten-year period. K-8 enrollment decreased by 15.8%. 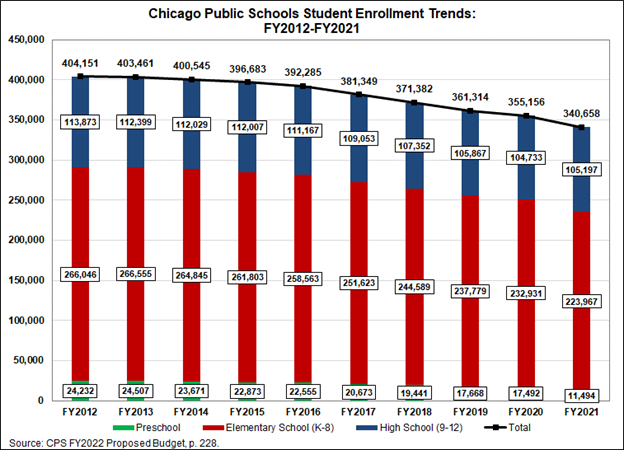 Comparatively, in the ten years from FY2013 to FY2022, personnel levels have increased slightly by 2.2% or 890 full-time equivalent (FTE) positions. For FY2022 the District has budgeted for a total of 41,756 FTE positions. This represents a significant increase of 2,017 positions, or 5.1%, over the prior year. Personnel levels decreased between FY2013 and FY2018 from 40,865.6 FTEs to 36,510.9 FTEs. This decline coincided with the State of Illinois budget impasse, which led to significant funding declines for Chicago Public Schools. Then over the next five years, between FY2018 and FY2022, personnel increased by 14.4%, or 5,245.2 FTE positions. The largest categories of personnel to increase in the past five years between FY2018 and FY2022 are school support staff and citywide student support. School support staff, which includes classroom assistants, security officers, school clerks and lunchroom staff, will increase by 17.8% or nearly 1,800 budgeted positions. Citywide Student Support, which include nurses, social workers, custodians and other administrative and support staff positions, will increase by 32.8% or nearly 1,600 budgeted positions. The number of budgeted teacher positions has increased by approximately 1,200, or 6.1%, over the past five years. 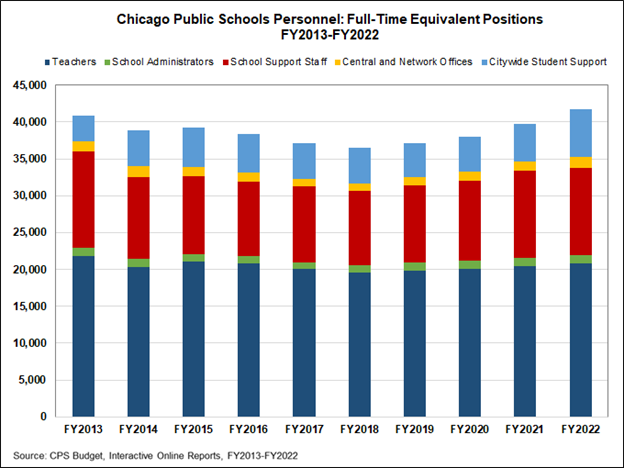 While personnel numbers have only increased slightly in the past ten years, spending on personnel—including on salaries, benefits and pension costs—has increased by a whopping 40.1%, or $1.4 billion, over the same period. The chart below demonstrates the increase in personnel expenditures over the past ten years compared to the number of personnel positions. Spending for personnel compensation increased from $3.4 billion in FY2013 to $4.8 billion in the FY2022 adopted budget. As the chart shows, personnel positions decreased between FY2013 and FY2018 before increasing sharply over the past five years. 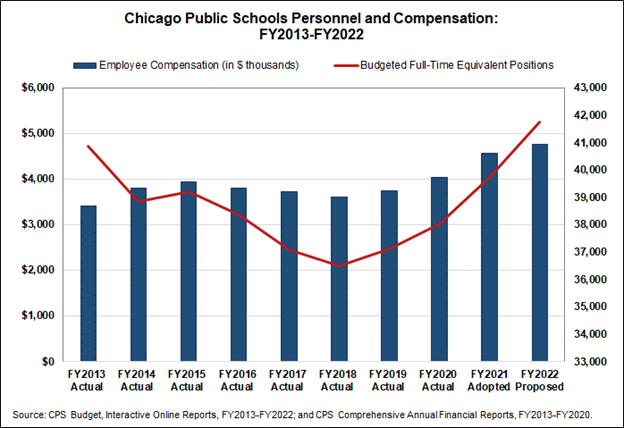 While the Civic Federation recognizes that some spending increases are tied to contractual obligations in the collective bargaining agreement with the Chicago Teachers Union and statutorily required increases in pension contributions, the Federation is concerned that a continuation of these trends is unsustainable over the long term. The collective bargaining agreement reached with the Chicago Teachers Union for FY2020 through FY2024 was expected to require an additional $558.3 million over the five-year period. At the time the contract was approved in fall 2019, the District expected that its State and local revenue would grow by $200 to $250 million annually. Growth in local and State revenue projected in FY2022, however, is only $140 million higher than last year’s budget.

The FY2022 budget includes a $127 million increase in salaries connected to the collective bargaining agreement, but also includes additional investments in staff positions funded through federal COVID-19 relief funds, which will require ongoing funding after the federal stimulus funds run out in 2024.

The Civic Federation urges the Chicago Public Schools staff and Board of Education to produce a public multi-year plan outlining revenue and expenditure scenarios over the next five years. While we understand the District may not yet be able to accurately predict what revenue will total in future years, it is important for the Board of Education to be informed about how much expenditures are expected to rise in future years. The District should prepare scenarios that show both optimistic and pessimistic revenue assumptions, the potential resulting deficits and steps the District could take to address future budget deficits.