As highlighted in the Civic Federation’s analysis of the proposed FY2013 City of Chicago budget and discussed in last week’s blog post, Chicago faces difficult choices due to the continued decline of its four pension funds.

The Police and Fire pension funds have the lowest actuarial funded ratios at 35.6% and 28.3%. The funded ratio shows the percentage of pension liabilities covered by assets. The lower the percentage, the more difficulty a government may have in meeting future obligations. Although their funded ratios are very low and continue to fall, the Police and Fire funds no longer face imminent collapse because of a state law that will require significant increases in employer funding from the City starting in 2015.

The Municipal and Laborers’ funds still face insolvency in 2025 and 2028, respectively, according to the directors of those funds. The Municipal fund was 44.6% funded as of FY2011, the most recent data available, and the Laborers’ fund had 64.9% of the assets it would need to cover its liabilities. The following chart shows how quickly each fund has deteriorated over the ten years between 2002 and 2011. Each of the funds’ ratios has fallen by roughly half over the past ten years and their combined ratio as of FY2011 was only 43.3%. 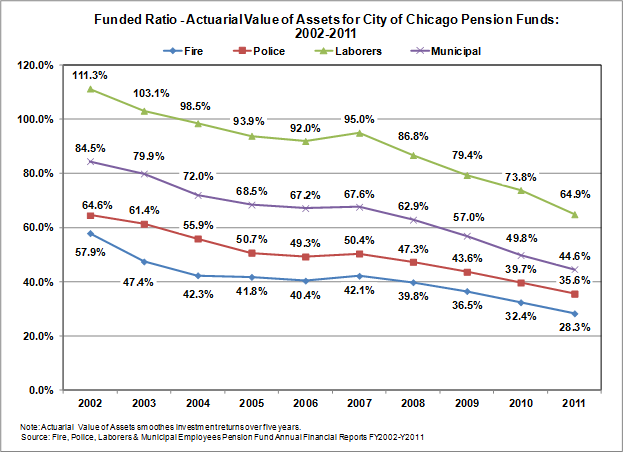 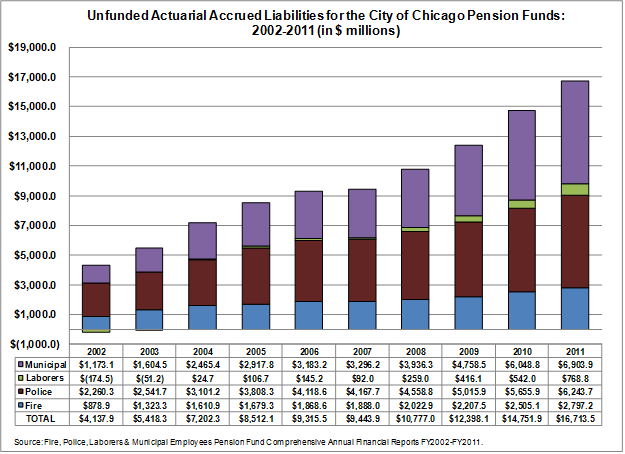 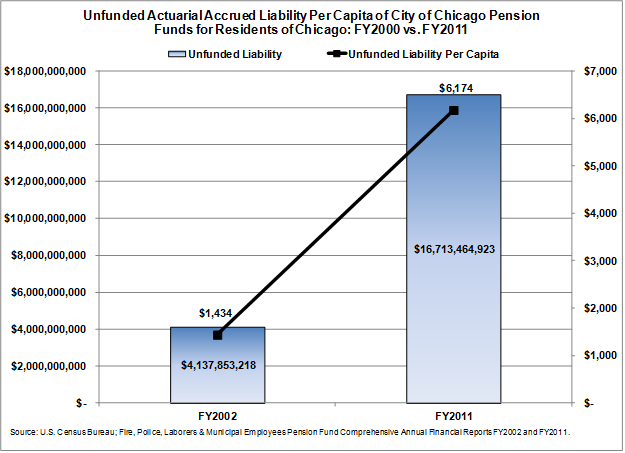 The City of Chicago’s proposed FY2013 budget projects that the City’s contribution to its four pension funds will be $479.4 million. According to statute, the City contributes a multiple of employee contributions made two years earlier to each of its four pension funds. As noted above, this funding method, which has been inadequate for most of the last ten years, will continue only for the Municipal and Laborers’ funds after FY2014. In 2015, the City will be required to begin making contributions that will be sufficient to bring the funded ratio of the Police and Fire funds to 90% by the end of 2040, as established by Public Act 96-1495, passed in 2010. The City has estimated that its total contributions to all four pension funds will increase by $730.1 million in FY2015, due mostly to the increase required by P.A. 96-1495. The following chart shows historical and projected payments to the pension funds from 2002 to 2020. 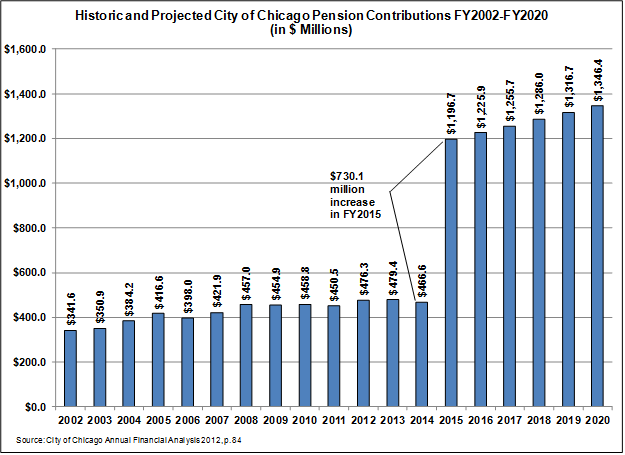 Mayor Emanuel has proposed pension reforms that he says would reduce the unfunded pension liability by 40%. However, it is also important that the Mayor and his team explain to employees, retirees and taxpayers how their plan would impact pension contributions and ensure the pension funds will provide sustainable benefits.