On Tuesday, May 8, 2012, Mayor Rahm Emanuel offered a plan to reform pensions for employees of the City of Chicago, Chicago Public Schools and Chicago Park District during a hearing of the Illinois House of Representatives Personnel and Pensions Committee.

The Civic Federation is encouraged by Mayor Emanuel’s pension reform initiative and looks forward to receiving more details on how each of the provisions of the plan will be phased in, their financial impact in terms of cost savings and what the governments’ contributions will be going forward. The proposal is a strong outline of a comprehensive, balanced solution to the Chicago, CPS and Park District pension crises that includes shared sacrifice by retirees, current employees and eventually taxpayers.

1. Temporary suspension of the annual automatic annuity increase for current retirees: The current 3% compounded annual increase would be suspended for ten years, after which a simple interest annual increase will be implemented.

3. Increase in the retirement age by five years: According to testimony by Chief Financial Officer Lois Scott, the increased retirement age would include a ten-year phase-in plan to mitigate the effect of the reforms on those currently close to retirement age.

4. 401(k)-type Retirement Option: More choices would be provided to allow newer employees the flexibility to take accrued benefits with them if they leave City employment. 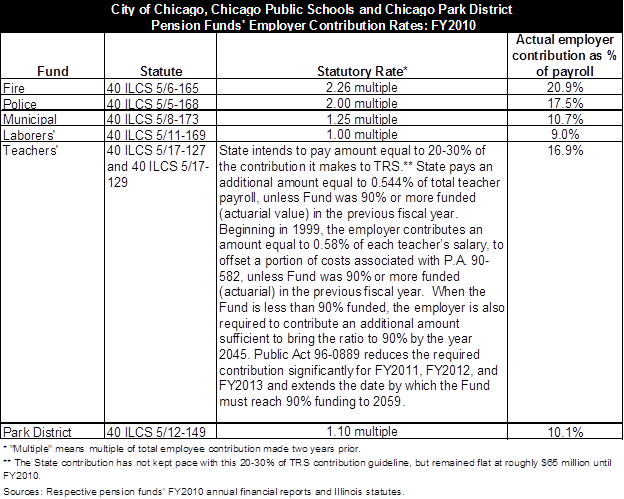 According to her testimony, CFO Lois Scott said that the Administration plans to take their proposal to the public, labor unions and legislators for further discussion and feedback before the reform proposals are written into legislation.

In his testimony, Mayor Emanuel said that current unfunded liabilities for the four City pensions funds and the Chicago Teachers' and Park District funds amount to $20 billion. By the fiscal year 2016, the City’s payments toward its four employee pension funds will represent 22% of its operating budget. The Mayor stressed the importance of addressing the pending fiscal crisis because of the budgetary constraints it will impose on the City. The following exhibit explores the current status of the City’s four pension funds, the Chicago Teachers’ Pension Fund and the Park District Pension Fund.

Funded Ratio
The most basic indicator of pension fund status is its ratio of assets to liabilities, or “funded ratio.” When a pension fund has enough assets to cover all of its accrued liabilities, it is considered to be 100% funded. This does not mean that further contributions are no longer required, but rather that the plan is funded at the appropriate level on the date of valuation. A funding level of less than 100% means that a fund does not have sufficient assets on the date of valuation to cover its accrued actuarial liability.

The actuarial funded ratio of each of the four City pension funds and the Teachers’ and Park District funds declined in FY2010. The largest declines were in the Municipal and Teachers’ Funds. All six of the funds are now less than 75% funded. The lowest actuarial value funded ratios for FY2010 are those of the Fire and Police pension funds at 32.4% and 39.7%, respectively. The Commission to Strengthen Chicago’s Pension Funds projected in April 2010 that the Fire and Police Funds would run out of money in approximately ten years. Changes to funding enacted by the State in 2010[1] that will start in FY2015 will save the funds, but at a significant cost to City taxpayers.

The following chart illustrates the City of Chicago’s six pension funds’ actuarial standings since FY2001. The actuarial value funded ratio for the aggregate of the six funds’ assets and liabilities was 57.8% in FY2010, down from 62.5% in FY2009 and 88.5% in FY2001. 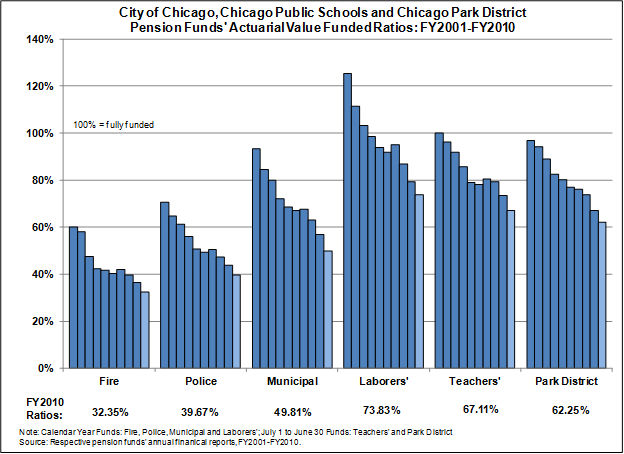 The following graph shows the five-year trend in UAAL for each of the four City pension funds and the Teachers’ and Park District funds. The largest FY2010 unfunded liability was in the Municipal Fund at $6.0 billion, an increase of 90.0%, or $2.9 billion, over FY2006. The Police and Teachers’ Funds also had over $5.0 billion in unfunded liabilities in FY2010. 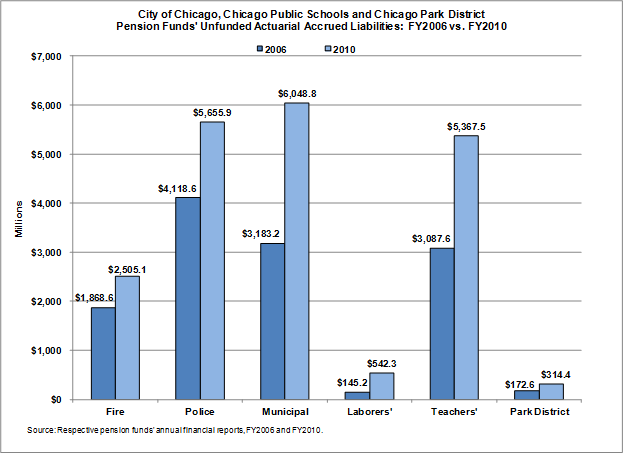