Although it does not receive as much attention as the Skyway and the metered parking system leases, the downtown public parking system lease was also a very significant privatization transaction. It was undertaken by the City of Chicago, which owned one parking garage in the system and also involved the Chicago Park District which owned the other three garages in the system. The downtown parking system’s four garages constitute the largest underground parking system in the United States. An infrastructure fund established by Morgan Stanley Investment Management received the rights to operate the Parking System for 99 years in exchange for $563 million.[1] They are also required to maintain and rebuild the garages during the term of the agreement.

The District entered into an Intergovernmental Agreement (IGA) to transfer its three downtown parking garages to the City of Chicago for $347.8 million. The Civic Federation described the District’s use of these proceeds in the recently released analysis of the Chicago Park District FY2011 Budget. The proceeds allowed the District to retire garage related bonds and establish three funds: 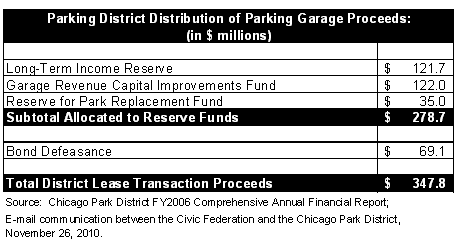 The following chart illustrates the revenues and expenses for the reserve funds for years that actual data is available. Some significant expenditure highlights of the funds include the following: 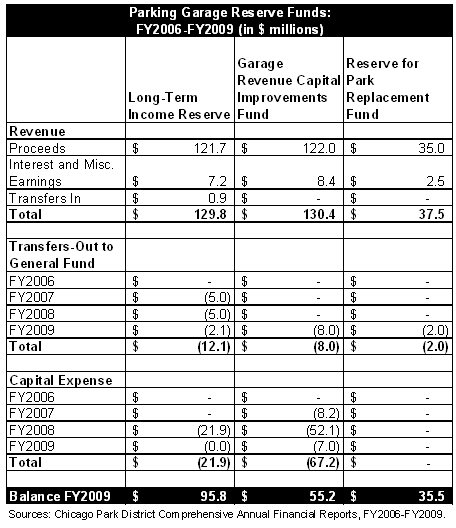 It appears that the Park District has thus far prudently managed the parking garage reserve funds by investing in capital projects and striving to utilize only interest earnings for operations. It is crucial that the proceeds from leasing major assets be treated with the highest level of financial stewardship including complete transparency, consideration of intergenerational equity and a focus on sustainability. To that end, the analysis did offer recommendations to improve the Park District’s use of the reserve funds:

It should also be noted that interest earnings from the Long-Term Income Reserve Fund have not been sufficient to replace all of the revenue the District was receiving from the garages. The parking garages had reportedly been generating approximately $5 million per year in net income. In 2007 the reserve fund generated just under $5.0 million in interest earnings, but in FY2008 it only earned $1.7 million and in FY2009 only $536.0 thousand.[4]

The following chart outlines how the lease proceeds were utilized by the City of Chicago. The Civic Federation commended the City in its initial allocation of the funds for non-operating expenses.