Last week the Civic Federation described the City of Chicago’s structural deficit in our budget analysis and a blog post. One of the primary sources of funding that has allowed the City to finance this deficit has been revenues from the long-term leases of the Skyway and the metered parking system to private operators. The Civic Federation generally opposes using the one-time funding received from these public-private partnerships for operating expenses. The City of Chicago now finds itself in a position where the lease funds are almost gone, the structural deficit has gotten worse, and two significant City assets are no longer available.

The City of Chicago entered into the Skyway 99-year concession agreement in 2004 with the Skyway Concession Company (SCC), which included a consortium led by Cintra and Macquarie.[1] The City utilized the $1.83 billion from the Skyway deal to retire debt ($855 million), establish a Long-term Reserve Fund ($500 million), establish a Mid-Term Reserve Fund ($375 million), and set up a Human Infrastructure Fund ($100 million) for a variety of programs primarily focused on human service, job training, and housing programs. The City is projecting that by the end of FY2011 the only Skyway lease proceeds remaining will be the $500 million in long-term reserves.[2]

In 2009 the City privatized its metered parking system through a 75-year lease to Chicago Parking Meters LLC, whose investors include Morgan Stanley and Abu Dhabi Investment Authority.[3] The $1.15 billion it received was used to establish a Long-Term Reserve Fund ($400 million), a Mid-Term Reserve Fund ($325.0 million) a Budget Stabilization Fund ($326.3 million), and to continue the Human Infrastructure Fund ($100 million). The City is projecting that by the end of FY2011, 93.4% of parking meter lease proceeds will have been used, leaving only $54.0 million in the Long-Term Reserve Fund and $22.0 million in the Human Infrastructure Fund.[4] Most of the parking meter proceeds will have been expended in just three fiscal years.

Combined, only $576 million of the $2.98 million in asset lease proceeds will remain at FY2011 year-end. This raises concerns about intergenerational equity as current taxpayers are benefiting at the expense of past and future taxpayers.

The lease proceeds have primarily gone to general operating expenses; the Corporate Fund has used 60.9% or $1.6 billion[5] of the proceeds. Another 7.0% or $187.5 million has gone towards the human infrastructure programs. The Civic Federation did not include the Human Infrastructure Funds in our analysis of non-recurring revenues because they are tied to specific programs that in theory will be discontinued when the funds runs out. However, there will likely be pressure to continue these programs, creating yet another challenge when lease proceeds are exhausted. 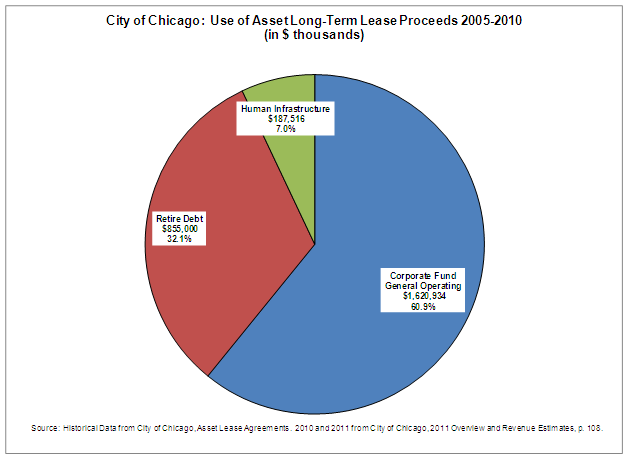 Particularly problematic is the drawdown of the Parking Meter Long-Term Reserve Fund (from $400.0 to $54.0 million). This fund was intended as a revenue replacement fund that would generate interest to offset lost parking meter revenue. The ordinance specifies that the funds are to be held the by the City and the principal maintained to generate investment earnings. The use of the Long-Term Parking Meter Reserves is considered borrowing and therefore the fund will need to be paid back. Unlike the Skyway Long-Term Reserve Fund, the Parking Meter Long-Term Reserve Fund is required to transfer at least $20 million in interest earnings per year to the Corporate Fund. If $20 million is not earned then the balance comes from the principal. As funds are borrowed from the principal there will be a smaller balance available on which to earn interest and therefore even more must be taken from the principal to meet the $20 million requirement perpetuating a downward spiral.

It would be understandable to tap some asset reserve funds in a time of extreme economic distress. The Civic Federation analysis recommends that the City adopt a formal reserve asset lease reserve withdrawal policy to guide the use of reserve funds during such periods. However, the use of non-recurring sources predates the economic downturn. According to the City, 2007 was the peak year in economically sensitive revenues.[6] The City began using Skyway Mid-Term Reserve funds to balance its budget in 2005. It was also using its Corporate Fund fund balance, which can be viewed as the City’s savings account. Between FY2000 and the peak year of FY2007 the City drew down its Corporate Fund fund balance by $76.0 million or 94.3%.

There have already been repercussions to the City’s repeated use of asset lease reserves and non-recurring revenue. In August of 2010, Fitch downgraded $6.8 billion in outstanding City general obligation bonds from AA+ to AA and a negative outlook. Moody’s downgraded the City’s outstanding $6.8 million in long-term general obligation debt rating to Aa3 with a stable outlook from the previous rating of Aa2. Moody’s also based their decision in part on Chicago’s excessive dependence on asset lease reserves that are being rapidly depleted.[7] On October 28, 2010 Fitch announced another downgrade of the City’s outstanding General Obligation bonds from AA to AA-, again citing the City’s accelerated use of asset lease reserves and other non-recurring revenues for operating purposes as a key factor in assigning the downgrade.[8] Standard & Poor’s is the latest agency to lower the City’s rating.  S&P reduced the City’s rating one step from AA- to A+ also citing the City’s reliance on cash reserves to balance the budget.[9]