Over the summer, Illinois Governor JB Pritzker signed into law Public Act 102-0263, which makes changes to the funding schedule for the Chicago Park District’s pension fund, allows for pension obligation bonds and creates a third tier of benefits. The Park District Pension Fund has a complicated funding history that involves State pension reforms that were allowed to go into effect, then partially struck down, then subject to an agreed order, then returned to the previous inadequate multiplier basis. The new law is intended to put the fund on a path to 100% funding by 2057 instead of going insolvent by 2028. This blog will explore the provisions in the new law and compare it to the City of Chicago’s four pension funds under their new funding laws.

The Park District Pension Fund is extremely underfunded at 28.7%, and before PA 102-0263 was enacted, had been projected to go insolvent in 2028. Subsequent to a pension reform package that was passed in 2013 being struck down in court in 2018, the Park District worked with its unions and the General Assembly to develop a funding package that would avert a potential expensive shift to pay-as-you-go funding after the depletion of pension assets. The final package passed the General Assembly at the end of its Spring session. The law includes the following provisions and does not change benefits for current employees or retirees: 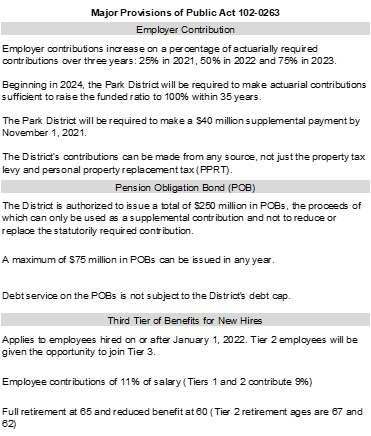 Prior to the 2013 pension reform law, and after it was struck down, the Chicago Park District contributed a set 1.1 times what employees had contributed to the fund two years prior. This amount had been insufficient for the actuarial needs of the fund for many years and was one of the main factors involved in the fund’s distressed financial state. The following chart shows the decline in the actuarial funded ratio of the fund between FY2001, when it was 96.7% funded, and FY2021, when it was only 28.74% funded. 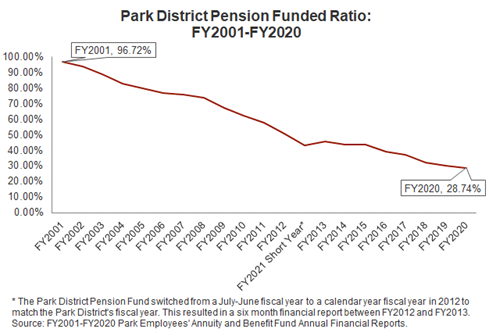 Pursuant to P.A. 102-0263, the Chicago Park District is also required to contribute an additional $40 million by November 1, 2021. This funding is intended to prevent the pension’s funded ratio from falling further while the District climbs the ramp to actuarial funding. According to the Official Statement for a Park District bond offering this month, as of September, the District had already paid $20 million of this amount.

In the same Official Statement, the District laid out its financial plans to be able to afford to make higher pension contributions. Its plans include “debt service savings from refundings, accessing PPRT revenues through the conversion of bonds secured by PPRT to Limited Tax Bonds, a moderate property tax increase and revenue enhancements from programmatic and recreational fees.” The District also has a balance of $30 million in its long-term reserve that it has dedicated for future supplemental pension contributions. The Park District is subject to the Property Tax Extension Limitation Law (PTELL or “tax caps”) which limits increases to its annual property tax extension to the lesser of 5% or CPI. Thus, it is not able to increase its levy to accommodate significantly increased pension contributions, as the City of Chicago, a home rule unit of government, did in 2015 to make its increased contributions to the Police and Fire funds.

The structure of the ramp to actuarial funding is different from the one used in the two pieces of legislation putting the City of Chicago’s four funds on 40-year funding schedules. In those bills, specific dollar ramp contributions were laid out in statute. However, the percentage of actuarial contribution is a preferable approach since the contributions will flex with the actuarial needs of the fund. As the City of Chicago has learned, unresponsive and unchanging contributions do not allow contributions to increase if the fund experiences investment losses or makes changes to assumptions, such as reductions to the discount rate. As a result, the City had to make significantly higher contributions than originally projected at the end of the ramps in FY2020 and FY2022. The increase in FY2022 for the Municipal and Laborers’ funds was over $400 million, $100 million higher than originally projected.

As noted above, the legislation allows the District to issue up to $250 million in POBs with up to $75 million in any one year. The POBs are not allowed to substitute or replace the statutory contributions. These POBs will not count toward the District’s debt limits. In testimony before the General Assembly during the spring, Park District Comptroller Steve Lux said that the District does not currently have any plans to issue POBs, but intends to use them to stabilize the fund if it has any cash flow issues. For example, if there are investment losses POB proceeds could be used to make benefit payments so that the fund avoids liquidating assets. The use of Pension Obligation Bonds by governments is generally frowned upon as an unsustainable and speculative practice that can contribute to financial distress. The Government Finance Officers Association (GFOA), for example, generally advises against issuing POBs.

The third tier of benefits for new hires is very similar to the one contained in the pension funding legislation for the City of Chicago’s Municipal and Laborers’ funds that was passed in 2017. The third tier of benefits has higher employee contributions of 11% vs. 9% for Tier 1 and 2. However, members of the third tier are able to retire two years earlier with either full benefits (age 65) or reduced benefits (age 60). Members of Tier 2, who were hired between January 1, 2011 and December 31, 2021, will be given an opportunity to irrevocably decide to join Tier 3. The Park District Pension Fund has indicated it will be communicating with Tier 2 members about their options and posted a presentation about the impact of joining Tier 3 on the pension fund’s website. A full analysis of the impact of Tier 3 on the fund has not been publicly released, but an actuarial impact statement examining several potential investment and benefit choice scenarios that could impact future employer contributions, funded ratio and unfunded liability has been posted on the Park District Pension Fund’s website. One of the scenarios projects 50% of Tier 2 members join Tier 3. The analysis finds that the impact is very modest on employer contributions, with employer contributions $430,000 lower in FY2022, $480,500 lower in FY2032 and $405,000 lower in FY2042 versus the baseline under the new legislation.

Projected Impact on the Fund

The same actuarial impact statement shows projections for funding levels under the previous statutory funding level of 1.1 times what employees contributed two years prior, if the fund achieves all of its actuarial assumptions and then under several scenarios. If the fund had continued under the old funding schedule, it was projected to run out of funding during FY2028. That was projected to trigger pay-as-you-go funding in FY2028 of $79.0 million, growing to a high point of $101.5 million in 2042, before declining as benefit payouts decline under Tiers 2 and 3. By comparison, under the new funding law, employer contributions are projected to grow through 2056, hitting a high of $101.0 million in 2056 and then decline to an amount necessary to keep the fund at 100%. The following chart shows both projected funding levels and employer contributions before and after P.A. 102-0263. 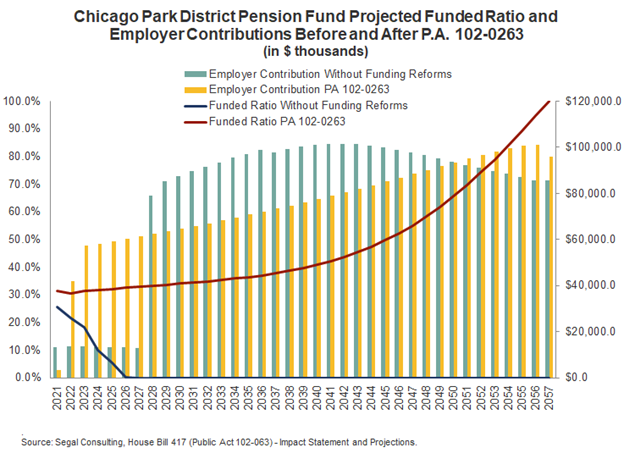 The Civic Federation looks forward to reading more about the Park District’s plans for funding its obligations under Public Act 102-0263 in its forthcoming FY2022 budget and will continue to monitor the condition of the fund.