This blog post presents an overview of the Chicago Transit Authority’s FY2022 operating budget, including a summary of how federal stimulus funds were used to balance the budget, and an update on its recent $350 million debt issuance.

The Chicago Transit Authority, like other transit agencies around the country, faces serious challenges to its future operations and fiscal solvency in the wake of the COVID-19 pandemic. Federal funds have been critical in maintaining transit service in the Chicago region. These funds will be exhausted in 2024. If revenues and ridership do not rebound by that time and funding rules aren’t changed, the CTA may be forced to make some difficult financial decisions, including service reductions and/or fare increases to maintain operations.

The Chicago Transit Authority FY2022 operating budget of $1.7 billion was approved by the Regional Transportation Authority (RTA) on December 16, 2021.[1] It had previously been approved by the CTA Board on November 17, 2021.[2] The budget is an 8.8% increase from the previous budget of $1.6 billion. Approximately 71.1% of the budget, or $1.2 billion, is earmarked for personnel related expenses. The next largest individual line item is for material, at $102.6 million. Other expenses, which aggregates a variety of line items such as utilities, legal fees, advertising, consulting services and debt service for outstanding debt, will be $273.1 million. Of that amount, $156 million will be used for pension obligation bond debt service.[3] 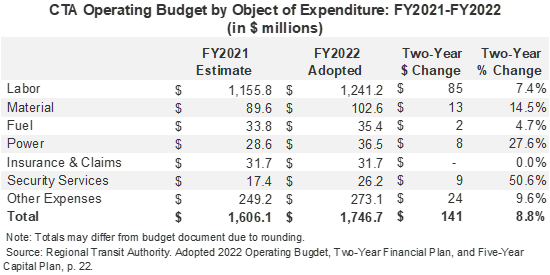 The FY2022 CTA budget is funded from four sources:

System generated revenues: Fare and pass revenue from CTA bus and train customers is the largest source of these revenues, with $293.9 million, or nearly 80.0% of the total amount of $368.8 million budgeted in FY2022. Smaller amounts will come from advertising, concessions, contributions from the City of Chicago and Cook County and other revenues.

Public funding through the Regional Transportation Authority: These revenues include funds from the regional sales tax authorized for transit in northeastern Illinois as well as real estate transfer tax revenues and public transportation funds. In FY2022 public funding will provide $922.4 million, an increase of 2.8% from the prior year.

Federal relief funds: These funds will provide $299.3 million for operations in FY2022.

Budget Balancing Actions: The RTA Board approved an allocation of $156.2 million from its allocation of American Rescue Plan funds to balance the CTA’s FY2022 budget.[4]

As noted above, CTA system generated revenues are derived primarily from bus and train fares. However, transit ridership has been severely impacted by the pandemic. While ridership is projected to increase in FY2022 to a total of 252.1 million unlinked rides, this is still a 47.6% decline from FY2017, a decrease of 228.2 million rides. 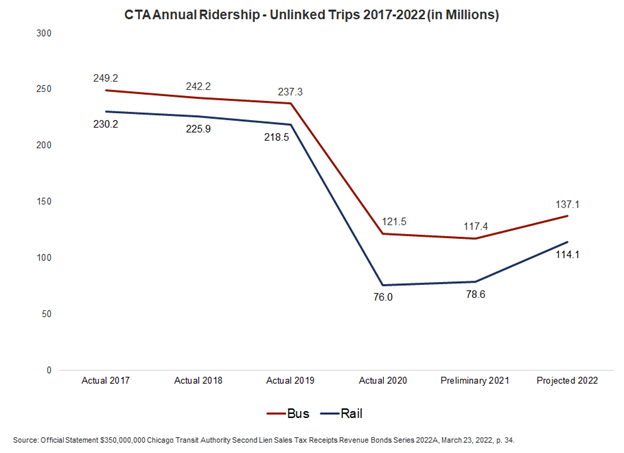 To incent increases in ridership, the CTA is taking several steps to reduce costs for customers beginning in December 2021, including:

Use of Federal Stimulus Funding in CTA Budgets

The CTA relied on federal stimulus funding to offset declines in revenues in 2020 and 2021 and will continue to do so through 2024. The CTA notes that it cannot predict when its revenue stream will recover from the effects of the COVID-19 pandemic.[6]

The table below shows the amount of federal funding provided to the RTA and allocated to CTA, Metra and PACE through three major Congressional COVID-129 pandemic relief acts to date: The Coronavirus Aid, Relief, and Economic Security (CARES) Act of 2020, the Coronavirus Response and Relief Supplemental Appropriation (CRRSA) Act of 2021 and the American Rescue Plan Act (ARPA) of 2021. A total of $3.3 billion has been provided through these acts. Of that amount, the CTA received nearly $2.1 billion or 62.0% of the total.

In March 2022 the CTA was awarded was an additional $118.4 million in ARPA discretionary funds to cover additional expenses related to the COVID-19 pandemic. It was one of 35 transit agencies awarded this funding.

The Regional Transportation Authority has indicated that the $912.1 million allocated from ARPA funds should be sufficient to cover most of the CTA’s projected shortfalls through 2024. However, if CTA sales tax revenues are not adequate to cover any remaining gaps them service cuts or fare increases may be required.[7]

The Chicago Transit Authority issued $350.0 million in Series 2022A second lien sales tax revenue bonds in March 2022. The bonds were issued with a $37.9 million premium, so the total funds available for CTA uses will be $387.9 million. This is the third bond issue for the CTA in three years. In June 2021, it issued $120.9 million in capital grant receipts refunding series bonds[8] and in 2020, the CTA issued a total of $901.9 million in revenue bonds.[9]

The 2022 revenue bonds will be used for three purposes: