An Illinois Supreme Court decision overturning legislation to reduce the State’s massive pension costs will add to the difficulty of creating a balanced operating budget for the year that begins on July 1, 2015.

The high court struck down the law on May 8, ruling that it violated the Illinois Constitution by cutting benefits for retirees and employees. The 2013 legislation reduced annual benefit increases, raised retirement ages for younger workers and capped the salary on which pension benefits are based. It was supposed to take effect on June 1, 2014, but implementation was delayed by lawsuits from retirees, employees and labor unions.

The court ruled that the measure was in clear violation of the constitutional provision that establishes membership in a State retirement system as “an enforceable contractual relationship, the benefits of which shall not be diminished or impaired.” The ruling rejected the argument that Illinois’ fiscal crisis permitted the State to use its police power to reduce pension benefits. The police power is the State’s reserved sovereign power to protect the health, safety and general welfare of the community.

The court’s decision could also block a new pension proposal by Governor Bruce Rauner. That proposal has not yet been introduced as legislation in the Illinois General Assembly, although savings from the plan are included in the Governor’s recommended FY2016 budget.

As discussed here, the new proposal would not affect benefits already earned by retirees and existing employees. The plan would freeze the State’s more generous level of benefits, which are available to employees hired before 2011. These Tier 1 benefits would only be paid on service before July 1, 2015. For work after that date, benefits would be paid at the lower Tier 2 level. The plan would immediately eliminate the component of State pension liability that represents the effect of future salary increases on the value of pension benefits already earned by current workers.

In its ruling, the court said that the constitutional protection of pension benefits begins when a worker is hired. Any subsequent changes to pension law that diminish benefits could not be applied to that employee, according to the court’s opinion.

The 2013 pension legislation would have reduced the required $6.67 billion FY2016 contributions by about $1.2 billion, according to Civic Federation calculations based on actuarial reviews by the retirement systems. The Governor’s recommended FY2016 budget included pension contributions of $4.47 billion—a reduction of $2.2 billion from the amount required under existing law.

As discussed in the Civic Federation’s recent report on the recommended FY2016 budget, the Governor’s projected pension savings of $2.2 billion are a key part of the plan to close an operating deficit estimated at $6.2 billion. The operating deficit—the difference between revenues and expenditures—does not include the State’s backlog of unpaid bills, which is estimated at about $6.0 billion at the end of FY2015.

Without reductions in pension benefits, the Supreme Court ruling suggested that the State could either raise revenues or extend the time period to pay down the unfunded liability—the amount of accrued pension liability not covered by assets.

The existing 50-year pension funding plan began in FY1996. After a 15-year phase-in period, the law required the State to contribute a level percentage of payroll sufficient to bring the retirement systems’ funded ratio to 90% by FY2045 from approximately 52% in FY1995. A funded ratio shows the share of accrued liability covered by assets.

However, the funding plan and subsequently enacted changes deferred a large portion of the required State contributions to later years. The funding schedule does not require the State to make adequate contributions to keep the unfunded liability from growing until approximately FY2030. At the end of FY2014, the State’s retirement systems had a total unfunded liability of $104.6 billion, based on the market value of assets, and a combined funded ratio of 42.9%.

The following chart shows projected General Funds pension contributions required under existing law from FY2015 through FY2045, based on the systems’ actuarial valuations as of the end of FY2014. Contributions increase from $6.1 billion in FY2015 to a projected $14.6 billion in FY2045. 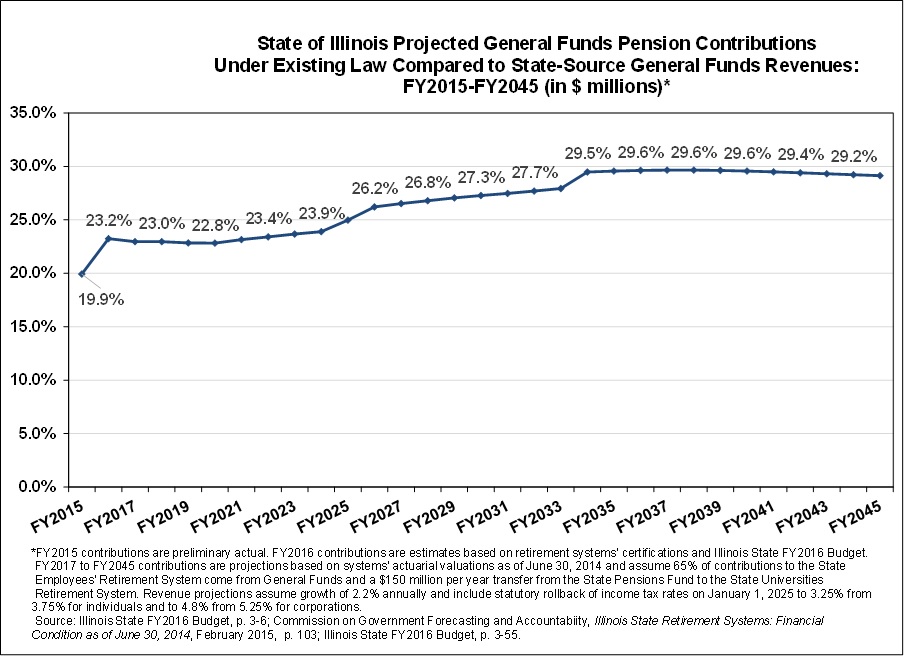 Assuming an annual growth rate of 2.2% for the State’s operating revenues, the share of State-source operating revenues dedicated to making the annual pension payment will peak at 29.6% in FY2035 and only decline slightly to 29.1% by FY2045.

The next chart shows General Funds pension contributions as a share of State-source General Funds revenues from FY2015 through FY2045.

The chart above does not include the cost of debt service related to the State’s outstanding pension obligation bonds (POBs) sold in FY2003, FY2010 and FY2011. The State will pay $1.5 billion in debt-related pension costs in FY2015 and $1.4 billion in FY2016. Annual costs related to POBs do not decline significantly until FY2020, when the payment drops to $674.9 million, or $911.5 million less than the FY2019 payment of $1.6 billion. However, the payment grows again through FY2029 to $1.0 billion and stays above that level until the bonds are fully repaid in FY2033.