Although the Governor and General Assembly enacted laws to provide for ethics reform and campaign finance reform last year, much needed fiscal reform of the State’s budget has yet to make it to the top of the legislative agenda in Illinois.

Despite facing a massive budget shortfall from FY2009 and the looming specter of failing revenues, last year the General Assembly enacted a budget for FY2010 that took no action to address the State’s widening structural deficit. The Governor’s proposed budget included several long-term and short-term fiscal policies and revenue sources to address some of the State’s budget woes. However, the General Assembly deferred solving the deficit in its enacted budget through borrowing and delaying payment of the State’s bills in FY2010. Thus the enacted budget for this fiscal year, also signed by the Governor, added to the increase in the deficit going into FY2011, which will total at least $12.8 billion.

The Institute for Illinois’ Fiscal Sustainability’s recent analysis of the FY2010 enacted budget provides a detailed timeline of how the FY2010 operating budget and capital budget were passed, giving the reader a bird’s eye view of how the budget unfolded and when certain decisions were made. The report also includes the following chart showing the various policies proposed by the Governor for FY2010, the Civic Federation’s position on those proposals and any action taken by the General Assembly. 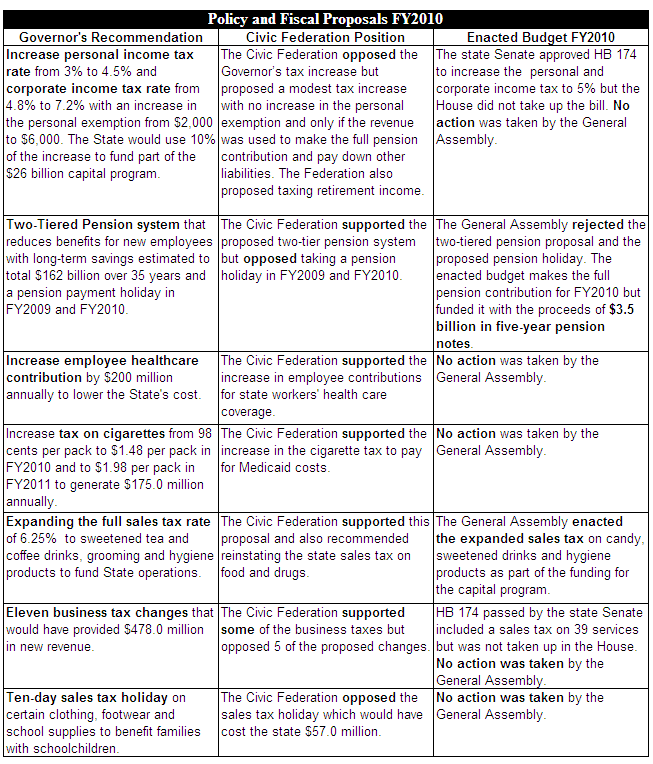 The FY2010 Illinois State Budget proposal from the Governor included five years of performance metrics for each agency. Some agencies provide outcome measures, such as cost per unit. However, most of these metrics are indicators of output, such as workload measures. These are counts of the number or percentage of activities undertaken or services delivered. In addition, goals are not provided for the statistics that are being measured. A lack of articulated goals makes it impossible to determine if agencies are meeting, exceeding, or falling short of program and policy targets or if they even have such targets. Given the administration’s continued focus on improving management efficiency, the Civic Federation urged the State to enhance the quality and effectiveness of the performance data collected, presented and utilized. The Emergency Budget Implementation Act of Fiscal Year 2010, passed on July 15, 2009, included the possibility that departments “may” institute many of these rigorous performance management initiatives but were not required to do so.