After two consecutive years of losses, the State of Illinois is reporting moderate growth in sales tax revenue for FY2011, which ended on June 30, 2011. Not only did sales tax revenue collected by the State grow but it also beat the projections on which the budget was based.

Total General Funds revenues from sales taxes declined from FY2008 through FY2010 by nearly $1 billion, from $7.2 billion to $6.3 billion. However, the Commission on Government Forecasting and Accountability (COGFA) reported in its monthly briefing for June 2011 that the State’s General Funds revenue from sales taxes increased to $6.8 billion for FY2011. This eclipsed both the sales tax estimate for FY2011 of $6.3 billion when the budget was enacted in June 2010 and the updated estimate of $6.5 billion included in the Governor’s FY2012 recommended budget document. The FY2011 total is an increase of 8.3%, or $525 million, from FY2010.

Since 1990 the sales tax rate on general merchandise in Illinois has remained the same at 6.25%, with 5.0% of the purchase price kept by the State and the remaining 1.25% paid to local governments. In Illinois local governments also charge sales tax, which leads to a varying composite rates from city to city and county to county across the State. For instance, the total sales tax rate on general merchandise in the City of Chicago totals 9.75% when all of the sales taxes charged by the overlapping governments are added on to the State rate.

The following graph shows the total General Funds sales tax revenue collected by the State only since 1990. 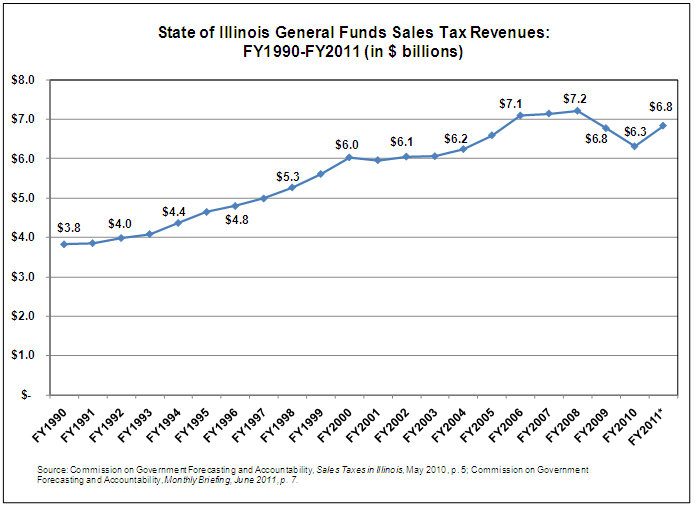 Although the State sales tax rate did not change, not all of the 8.3% increase between FY2010 and FY2011 can be attributed to an increase in economic activity. The State also received accelerated sales tax revenues through its Tax Amnesty Program, as previously discussed here. In all the State collected $163.8 million in delinquent sales tax payments during the amnesty period. In the Governor’s FY2012 budget recommendation, it was estimated that that only $43 million of the delinquent payments would have been received through the State’s normal tax enforcement measures. In previous years, the delinquent payments collected through enforcement were included in the the total General Funds revenue. After accounting for the amnesty collections less the normal delinquent payments that would have been collected, the growth in the Illinois sales tax revenues attributable to increased economic activity totals approximately $404.2 million, or 6.4%, from FY2010 to FY2011.

If sales tax revenue continued to increase at the same rate in FY2012, the State could expect General Funds revenue to increase to approximately $7.3 billion. This would put the annual revenue from sales tax above the FY2008 total of $7.2 billion, which was the highest annual collection by the State prior to the decline of the last two fiscal years. It would also be $700 million more than the estimated $6.6 billion total the General Assembly agreed upon when developing its FY2012 budget. The General Assembly’s revenue estimates were developed in the House of Representatives, which also passed a resolution stating that if revenues did exceed estimates, the additional funds must be used first to pay down the State’s backlog of bills and obligations. The State ended FY2011 with an estimated backlog of accounts payable totaling $4.6 billion and billions more in other liabilities outside the General Funds.

Sales taxes are the second largest source of the State’s General Funds revenues after income taxes. Income taxes also declined through FY2010 but increased in FY2011 exceeding the State’s original projections. However, the additional income tax revenue can almost entirely be attributed to the rate increases approved in January 2011, when the personal income tax was raised from 3.0% to 5.0% and the corporate income tax rate was raised from 4.8% to 7.0%. General Funds revenue generated by income taxes totaled $13.1 billion in FY2011, more than double the sales tax revenue, according to the COGFA report.