The income tax increases, combined with legislation authorizing borrowing of approximately $4 billion to make the State’s annual contributions to its retirement systems, are expected to cover the operating shortfall for FY2011 and allow the State to pay off a part of its $6.5 billion backlog of unpaid bills. However, the action does not reduce spending and does not appear to solve Illinois’ underlying budget problem: the chronic mismatch between revenues and expenditures.

It is important to note that Illinois businesses also pay a Personal Property Replacement Tax (PPRT) of 2.5%. The PPRT is a corporate income tax established when the General Assembly abolished all ad valorem personal property taxes on corporations in 1979 pursuant to the 1970 Illinois Constitution. The State distributes PPRT revenues to local taxing districts according to a formula based partly on each district’s share of personal property tax collection in 1976 or 1977. The combined PPRT and corporate income tax rate will rise to 9.5% beginning on January 1, 2011.

The tax increase legislation, Public Act 96-1496, establishes spending limitations for FY2012 through FY2015. The spending caps cover all spending from the State’s General Funds, including pension contributions, debt service payments and statutorily required transfers. General Funds support the regular operating and administrative expenses of most state agencies and are the funds over which the State has the most discretion and control. The Auditor General is required to report on any spending in excess of the specified limits. If the overspending is not corrected by the General Assembly or by the Governor, then tax rates for the year would be rolled back to their original rates.

Public Act 96-1496 also raises state revenues by eliminating through FY2014 the net operating loss (NOL) carryover deduction for corporations (but not for Subchapter S corporations). The NOL allows businesses to reduce their current tax liability by deducting losses suffered in prior years. The General Assembly also reinstated the state inheritance tax on estates of $2 million or more. The Illinois estate tax had lapsed in 2010 along with the federal estate tax.

The pension borrowing passed by the General Assembly, Senate Bill 3514 (House Amendments 3, 4 and 5) authorizes the issuance of up to $4.1 billion in Pension Obligation Bonds (POBs). As previously discussed in this blog, the new bonds are expected to be back-loaded over eight years, meaning that significant principal repayment does not begin until FY2015. That structure allows the State to pay off the $3.5 billion of pension bonds issued in FY2010 before beginning to make major principal payments on the FY2011 debt. The State is expected to pay higher interest costs on the new debt because of the delayed repayment of principal. A far larger debt proposal—to borrow up to $15 billion for operating purposes—had been discussed in Springfield, but the State only approved new borrowing for pension payments.

The table below shows the impact of the General Assembly’s recent actions on the State’s budget plan for FY2011. Under the FY2011 budget enacted on July 1, 2010, the State was facing an overall deficit of $12.3 billion, consisting of an operating shortfall of $5.8 billion and an accumulated deficit from prior years of $6.5 billion. That deficit has been financed by delaying payments to vendors and local governments. 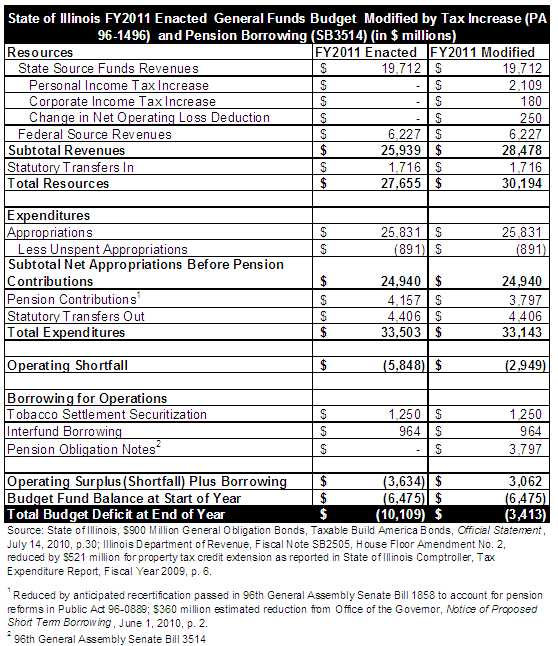 The enacted budget included borrowing to pay down roughly $2.2 billion of the $5.8 billion operating shortfall. The authorized borrowing consisted of issuing bonds backed by the proceeds of a tobacco litigation settlement and borrowing from Special Funds. Special Funds rely on specific fees, grants and statutorily required transfers from General Funds to pay for programs, provide grants or pay liabilities of the State outside the regular operating budget. This would have left an operating shortfall of $3.6 billion. The new measures are expected to generate additional tax revenue in FY2011 of roughly $2.5 billion, along with pension bond proceeds of approximately $3.8 billion. Now the State is expected to have an operating surplus of $3.1 billion and to shrink its accumulated deficit to $3.4 billion.

The following chart shows how Public Act 96-1496 would affect General Funds revenues. General Funds revenues would increase through FY2014 because of the tax increases and other measures and then decline after FY2014 as the tax increases are rolled back and the net loss carryover deduction is reinstated. For purposes of analysis, the chart assumes that base revenues—revenues that the State expected to receive in FY2011 under the existing tax rates—remain unchanged and do not rise due to improved economic conditions or other factors. 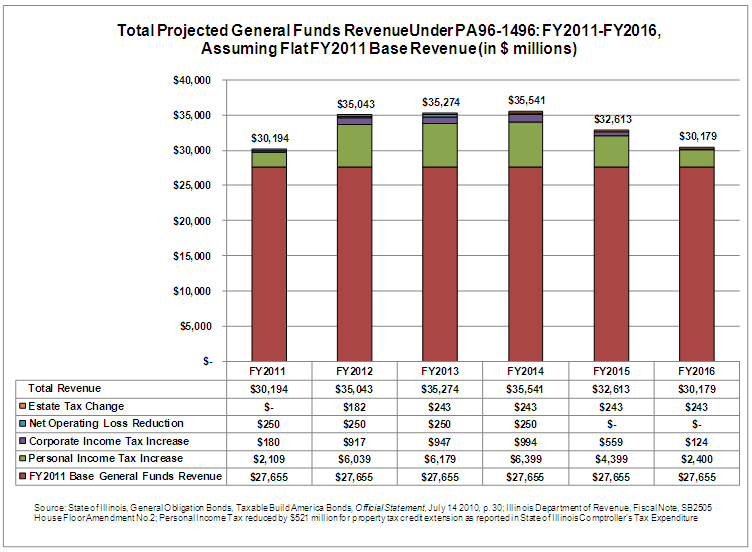 The table below shows that the State’s operating shortfall would rise to $6.5 billion in FY2015 if expenditures each year reached the spending limits set in Public Act 96-1496 and base revenues did not increase. Under the same scenario, the cumulative total deficit would grow to $16.4 billion by FY2015. Base revenues would have to increase by an average of 5.3% a year to close the operating shortfalls (6.4% in FY2012, 1.7% in FY2013, 1.6% in FY2014 and 11.3% in FY2015). David Vaught, Director of the Governor’s Office of Management and Budget, has said that the State expects revenue growth to average 2.8% a year between now and 2015.

In FY2016 General Funds revenues would decline further because the tax rate reductions would be in effect for an entire fiscal year. Public Act 96-1496 also includes new transfers out of General Funds to finance additional spending on education and human services. These new transfers begin on February 1, 2015 and are equal to 1/30 of total personal income tax and corporate income tax revenues. The transfers increase to 1/26 on February 1, 2025.