State Pension Facts: The Cost of COLAs for Illinois Teachers

In light of the State of Illinois’ pension funding crisis, it has become more widely understood that the annual Cost of Living Adjustment, or COLA, plays a large role in the State’s overall pension costs. Just how large, however, has been difficult to pin down.

As discussed here, detailed information on pension costs and projected savings due to proposed changes was hard to come by during the General Assembly session that ended on May 31, 2012. Governor Pat Quinn’s legislative working group on pensions collected extensive data from the State’s five retirement systems, but the information was not made available to the public.

However, the Teachers’ Retirement System of the State of Illinois (TRS), the State’s largest pension system, recently provided data on the impact of cost-of-living increases. TRS, with 362,121 members, covers teachers outside of the City of Chicago.

As at other State retirement systems, TRS retirees and employees hired before 2011 receive an automatic annual benefit increase of 3%, regardless of the actual inflation rate. The 3% is compounded, or applied each year to the total pension benefit rather than just to the original pension amount. Under a law enacted in 2010, the increase available to employees hired on or after January 1, 2011 is limited to 3% or one-half of the inflation rate, whichever is lower, and is based simply on the original pension. 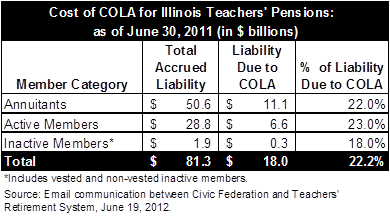 Illinois makes contributions to its retirement systems under a funding law (Public Act 88-0593) that began in FY1996. After a 15-year phase-in period, the law requires the State to contribute a level percentage of payroll sufficient to bring the retirement systems’ funded ratios to 90% by FY2045. TRS accounted for $2.4 billion, or 58.2%, of the State’s $4.1 billion in pension contributions from general operating funds in FY2012 and is budgeted to account for $2.7 billion, or 53.1%, of the $5.1 billion in contributions in FY2013.

Reduced COLAs are key elements of several recent proposals designed to lower State pension costs. A plan announced by Governor Quinn on April 20, 2012 offers employees hired before January 1, 2011 a choice between 1) keeping existing benefits, but with their pensionable salary frozen at the current level and no subsidy for retiree health insurance or 2) moving to a new system with a three percentage point increase in contributions, higher retirement age of 67 phased in over time and a simple-interest COLA of 3% or one-half of the inflation rate, whichever is less, delayed to the earlier of age 67 or five years after retirement. The Governor’s plan does not affect the COLA paid to existing retirees.

Senate Bill 1673 offers employees hired before January 1, 2011 a similar choice but does not include increased employee contributions or a higher retirement age. This proposal, however, does require retirees to choose between 1) moving to a new benefit plan with the lower and delayed COLA and a retiree health subsidy or 2) keeping the existing plan with the current COLA but no retiree health benefits.

Pension reform legislation was not approved by the General Assembly, although the Governor and legislative leaders continue to discuss possible solutions. A central disagreement involves a provision of both the Governor’s proposal and a version of SB1673 that would shift the normal or current service cost of pensions for teachers and university and community college employees from the State to their employers.