Whether the State of Illinois has spent more or less on education in the last five years has recently been the subject of intense debate. This blog post examines various factors that affect the calculation of education spending trends and expands on the Civic Federation’s recent report on the State’s enacted budget for FY2015.

Total education spending grows by $606 million, from $9.3 billion in FY2011 to $9.9 billion in FY2015, mainly due to increases in federal funding. Total spending includes funding from all three types of State accounts: General Funds, which support the regular operating and administrative expenses of most agencies; Other State Funds, accounts funded by designated revenue sources that may only be used for specific purposes; and Federal Funds, which use federal revenues outside of the General Funds to support a variety of programs.

General Funds are the funds over which the State has the most control. General Funds spending on elementary and secondary education declines by $282 million from $6.9 billion in FY2011 to $6.6 billion in FY2015. The FY2015 number includes $35.0 million appropriated to the Secretary of State’s Office for a grant to the Chicago Public Schools to build a school in the legislative district of House Speaker Michael Madigan.

The FY2015 appropriation figure is adjusted in the table above to account for the diversion of income tax revenue from General Funds beginning in February 2015. As discussed here and here, an estimated $200 million of this revenue will be diverted to the newly created Fund for the Advancement of Education to help pay for General State Aid, the main State spending program for elementary and secondary education. After adjusting for this funding switch, General Funds spending on education increases to $6.8 billion in FY2015 and the decrease from FY2011 is reduced to $82 million.

When determining trends in education spending, the starting point of the analysis affects the results. The Civic Federation traditionally examines two- and five-year trends, but other analyses might look at longer trends.

The major area of growth in State spending from FY2011 to FY2015 involves contributions to State pension funds. During this period, the State’s General Funds contributions to the Teachers’ Retirement System (TRS) increase by $1.2 billion, to $3.4 billion in FY2015 from $2.2 billion in FY2011. TRS, the largest State pension fund, covers teachers outside the City of Chicago. 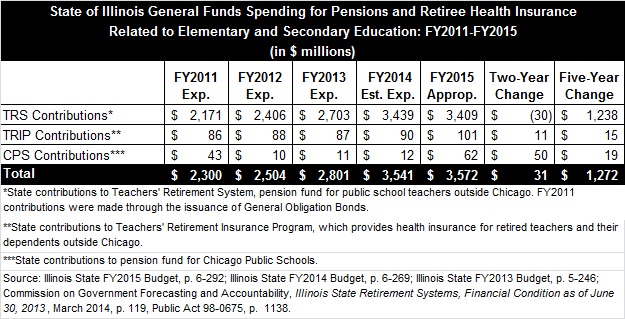 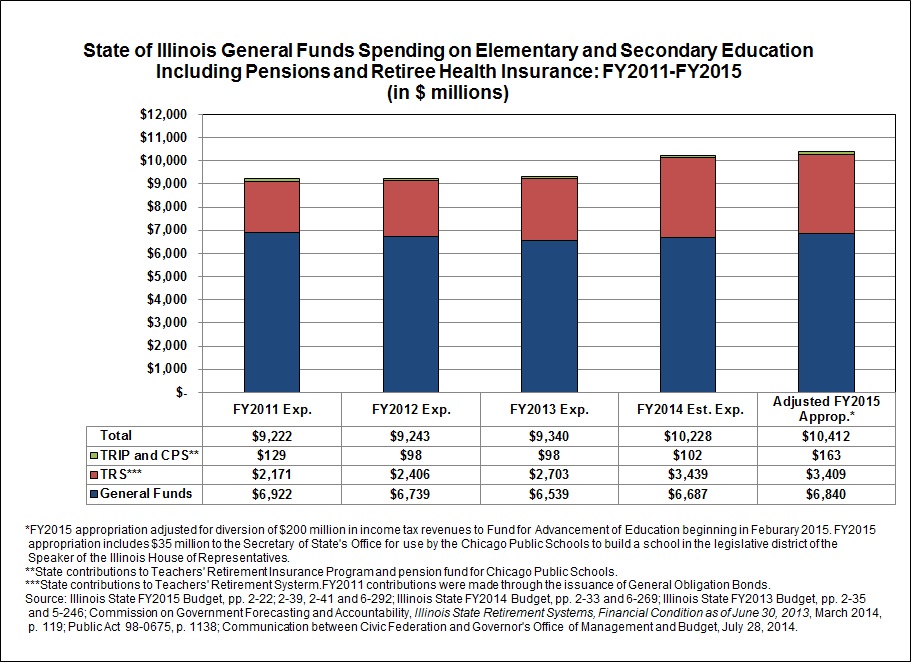 The State also provides significant funding for higher education and capital improvements that is not included in the totals above.