Despite a stopgap spending measure enacted on June 30, 2016, State of Illinois appropriations for higher education remain below expenditures in fiscal year 2015—the last year the State had a complete annual budget.

For FY2016 and FY2017, appropriations from general operating funds and related accounts total $1.6 billion, or 82.4% of the $1.9 billion spent in FY2015. In other words, higher education has been authorized to receive less than a full year’s worth of funding, compared with FY2015 spending.

As discussed here, higher education was among the major areas of State government that were not paid fully or at all in FY2016 due to the budget impasse. Higher education includes nine public universities, 48 community colleges and the Monetary Assistance Program (MAP), a college scholarship program for low income students.

Even without a complete budget, most State spending continued in FY2016 based on court orders, consent decrees and statutory requirements. In addition, the Governor signed the General Assembly’s appropriation bill for preschool through high school, which allowed public schools to operate during the 2015-2016 school year.

Public Act 99-0524, the partial spending plan signed on the last day of FY2016, similarly provides full P-12 education funding for 2016-2017. As discussed here, human services grants and programs receive about $667 million, which represents approximately 65% of the total funding needed to complete the FY2016 budget and fund the first half of FY2017, according to legislative reports. The new law also provides about $754 million for agency operations, although it’s not clear whether this amount is sufficient to cover the 18 months ending on December 31, 2016.

The PPRT Fund has not been used for higher education since at least FY2006, according to the Illinois Comptroller’s Office. The PPRT was created by the General Assembly in 1979 to replace a tax on the personal property of businesses that was abolished pursuant to the 1970 Illinois Constitution. The PPRT Fund is mainly a revenue source for local governments, but it has been used during Illinois’ recent financial crisis for a range of State costs, including regional school superintendents’ offices and court reporters. 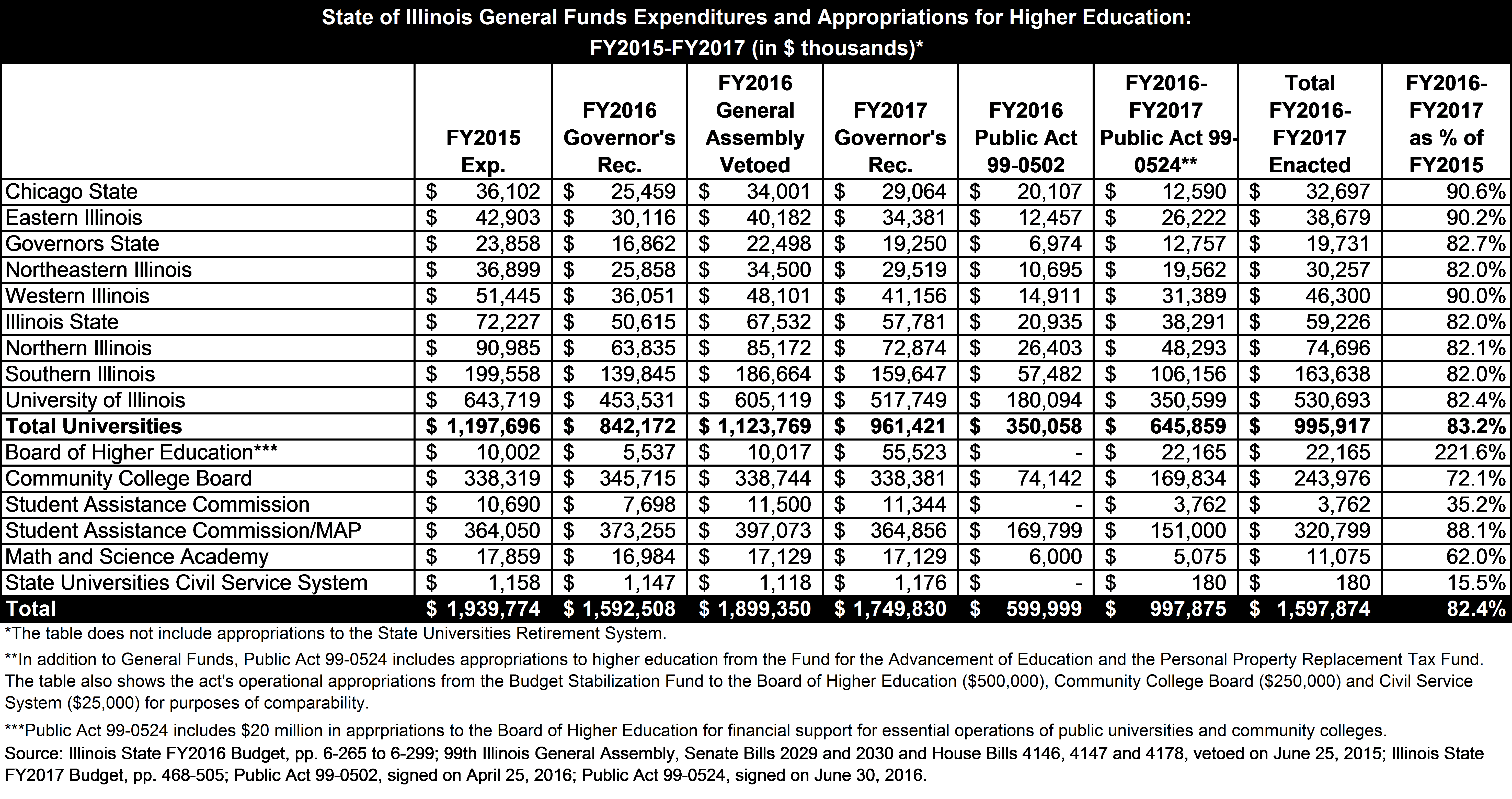 As shown in the table, the total two-year appropriation for FY2016 and FY2017 at $1.6 billion is 82.4% of the annual FY2015 amount of $1.9 billion. In a recent report, James Applegate, Executive Director of the Illinois Board of Higher Education, said higher education would have needed nearly $4 billion for FY2016 and all of FY2017 to be equivalent to FY2015 funding.

After the new partial spending measure was passed, Moody’s Investors Service downgraded the credit ratings of six of Illinois’ public universities, describing the stopgap funding as only “temporary liquidity relief.” On July 12, the Higher Learning Commission reportedly notified Chicago State that its accreditation was at risk due to financial strains.

MAP appropriations for FY2016 and FY2017 total $320.8 million, or 88.1% of the $364.1 million spent in FY2015. The Illinois Student Assistance Commission, which administers the program, has said that the $151.0 million appropriated in the new stopgap measure was intended to cover the 2016 spring semester and doesn’t provide any MAP funding for the 2016-2017 school year.

Some institutions have said they plan to credit students’ accounts for the scholarship money during the fall 2016 semester, as they did for at least part of the previous year. They are counting on the State to authorize additional spending later in FY2017.

The General Assembly adjourned after passing the partial funding measure and is not scheduled to reconvene until after the general election on November 8. The Governor has said he hopes lawmakers will agree after the election to a “grand compromise”—involving spending cuts, higher taxes and elements of his Turnaround Agenda.

However, the Republican Governor and Democrats who control the legislature remain at odds about the Governor’s policy agenda, which is intended to make Illinois more appealing to businesses.