Entering the third year of the Illinois Jobs Now! capital program, the State’s capital revenue sources are still well below the anticipated debt coverage needed to pay for the more than $16 billion in bond funded projects already approved.

In July 2009, along with a massive package of capital appropriations, the State passed a package of revenue ehancements to support the spending then estimated to be worth between $943 million and $1.2 billion annually. However, at the end of FY2011 these new taxes and fees only provided $458 million in total new funds, according to online revenue reports available on the Illinois State Comptroller’s website. In all it is expected that the State will need more than $1 billion annually to cover all of the debt service owed on bonds issued to support Illinois Jobs Now!

The largest hole in the new funding sources is the absence of video poker revenues. The State legalized video poker, to be taxed by the State at a 30% rate, and estimated that annual revenues would total between $287.4 million and $533.8 million starting in FY2012. However, a recently published legislative report on gaming in Illinois predicts the video gaming expansion will be delayed at least one more fiscal year. The Commission on Government Forecasting and Accountability’s latest report on gaming in Illinois explains that due to licensing and regulatory delays, video gaming receipts won’t be available until at least FY2013. The delay in video gaming is attributed to the Illinois Gaming Board’s ongoing search for a contractor to run the central communications system to monitor the new terminals statewide. Although a vendor was approved by the Board in August 2010, miscalculations of the total cost of the contract during the bidding process led the State to cancel the agreement and start the selection process over. A new provider has yet to be named. Once the system is established, the Board will also have to process applications from thousands of bars, restaurants, truck stops and other establishments statewide that qualify for up to five gaming machines by having a valid liquor license.

Estimates of the revenue from taxing video poker have also declined because Chicago and more than 60 other local and county governments opted out of legalizing gaming terminals in their communities. Estimates published last spring show the total revenue from video gaming revenues to the State declining by approximately 36%, to between $184 million and $341.7 million.

In the meantime, the other revenue sources enacted with the capital budget have been less than adequate to pay for the debt service on the $2.7 billion in new debt issued over the last two years. The funding measures include increased liquor taxes, increased State motor vehicle fees, expanded sales tax on some sweetened beverages and candy and additional lottery proceeds from the private marketing of the State lottery. The revenue from these sources is deposited in the Capital Projects Funds and then used first for debt service owed on the new bonds. In future if revenues exceed debt service owed, any balances in the Capital Projects Fund could also be used for pay-as-you-go capital projects.

Many of the new taxes and fees were implemented in FY2010, making FY2011 the first full year of revenue for most of the sources. The vendor for the lottery marketing deal was chosen early in FY2011 and has stated it expects to hit or exceed the original revenue projections for the State in FY2012.

The following chart shows actual revenues deposited in the Capital Projects Fund, excluding video gaming, compared to the original projections for each of the new capital program revenue sources for FY2010 and FY2011. 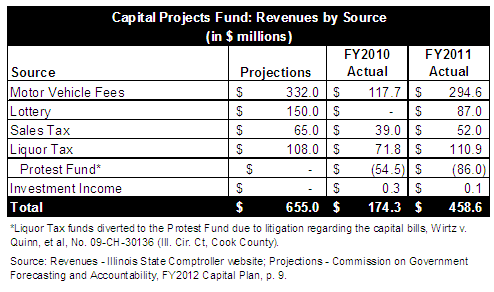 As noted in the chart above, a large portion of the revenues from the increased liquor tax was held in the Protest Fund due to litigation filed against the capital bills, primarily focused on the revenue bill. After the state Supreme Court upheld the legality of the capital bills in July 2011, a total of $140.6 million was transferred back in FY2012 from the Protest Fund to the Capital Projects Fund. This will be a boost to FY2012 revenues but may be offset by amounts owed to the Road Fund that covered its shortfall to pay for new debt service in FY2011.

All new debt service costs attributable to Illinois Jobs Now! projects are meant to be paid for out of the Capital Projects Fund, while existing debt service for bonds sold prior to FY2010 are paid for out of General Funds and the Road Fund. However, under the enacting legislation if the Capital Projects Fund does not have sufficient revenues to cover all of the new capital GO debt service, the Road Fund is required to cover the difference.

The Road Fund is a special revenue fund of the State and the primary funding source for the State’s ongoing construction of roads, bridges and other transportation infrastructure. It has a total annual budget of roughly $3.0 billion and receives approximately half of its revenues from state vehicle fees, license fees and motor fuel taxes. The remaining funding comes from the federal government.

Due to the timing of the bond issuances, the increase in debt service for the new bonds in FY2010 totaled only $154.6 million and Capital Project Fund revenues of $174.3 million were adequate to pay all of the increased cost of the capital bonds. However, in FY2011 the total debt service owed on the new bonds totaled $591.7 million, compared to only $458.6 million in Capital Project Fund revenues. The total shortfall of $133.1 million would be reduced to $113.3 million if the balance of $19.7 million in surplus from FY2010 were applied to the shortfall. This corresponds to the $112.1 million increase in Road Fund debt service paid in FY2011 from FY2010, which increased from $335.4 million to $447.6 million. Any amount paid for the new debt service creates an irrevocable debt in the Capital Projects Fund, which must be repaid to the Road Fund.

It has been reported that the State plans to issue an additional $1.0 billion in debt before the end of the 2011 calendar year. The Governor’s recommended budget also projected that a total of $2.1 billion in new GO Bonds would be sold in support of the capital budget by the end of FY2012.