Despite a $2 billion drop in the State’s annual revenues in FY2010 , the General Assembly passed Governor Pat Quinn's proposal to provide a back-to-school sales tax holiday for Illinois consumers as part of the FY2011 budget.

The State charges a composite rate of 6.25% on consumer purchases of most general merchandise from retailers in Illinois, but only 5% of that rate is the State’s share. The State also collects then passes along 1.0% for municipalities and .25% for county governments. The sales tax holiday enacted for the current fiscal year, only applies to the State’s 5% portion of the sales tax on a limited list of school supplies and clothes from August 6, 2010 through August 15, 2010.

However, consumers who expect to pay no sales tax on purchases of school clothes and supplies during the holiday will be disappointed. Many jurisdictions have several overlapping sales taxes levied by cities, counties and transportation authorities. In the City of Chicago the rate charged for the back to school items that are exempt will only decline from the current composite rate of 9.75% to 4.75%.

Illinois joins 16 other states that have similar exemptions in the fall aimed at lowering out of pocket education costs for families with children. The 10-day exemption period approved by Illinois is the longest; other states’ temporary sales tax exemption periods range from 2 to 6 days. Some also have multiple sales tax holidays to reduce the cost of everything from energy efficient appliances to firearms. This is the first time Illinois has approved such a back-to-school sales tax holiday.

The Governor first proposed such an exemption as part of his FY2010 recommended budget. At that time the Department of Revenue estimated the reduced rate would cost the State approximately $40 million to $50 million. The proposal was not included in the Governor’s FY2011 budget but materialized as SB3658. The law did not include a fiscal note from the revenue department updating the estimated cost of the exemption, but the Commission on Government Forecasting and Accountability (COGFA) recently estimated the cost at between $20.6 million to $67.1 million.

The most recent year-end revenue estimates provided by COGFA show that state sales tax receipts for FY2010 totaled $6.3 billion, down 6.9% from the FY2009 total of $6.8 billion. The final FY2009 state sales tax results were reported in May 2010 and were down 6.2% from FY2008. Relative to these amounts, the potential cost of the sales tax holiday represents less than 1.0% of the total sales tax revenue Illinois depends on to support its operations. According to the latest budget information for FY2011 provided by the State as part of its July 17, 2010 Build America Bond issuance, the cost of the exemption has not been added to the $12.0 billion deficit the State already faces in FY2011. The State’s deficit includes an operating shortfall in FY2011 of $5.9 billion and $6.1 billion in unpaid bills carried forward from previous years.

Although the cost of the sales tax holiday is relatively small compared to the 11-figure deficit, retailers tasked with administering the tax break and consumers looking for a deal may face big discrepancies and complications at the time of purchase.

The Department of Revenue recently published an informational bulletin explaining all the twists and turns of the law, including a list of the exempt and nonexempt items. However, the ambiguity of some of the items could lead to trouble at the checkout counter. For instance the difference between school supplies – which are exempt – and art supplies – which are not – can be difficult to determine. The purchase of markers is exempt under the holiday as school supplies but watercolor paints are not because they are viewed as art supplies. There is no guidance on whether watercolor markers are considered one or the other. Backpacks are listed as exempt but briefcases are listed as nonexempt but it will be up to retailers to decide for themselves if popular over-the-shoulder messenger bags are one or the other. It appears likely that the general vagueness of the categories will lead to consumers paying different sales tax rates at different stores. The following chart shows a sample of the items that may sit side-by-side on a shelf but will be taxed differently under the law or may be hard to differentiate. 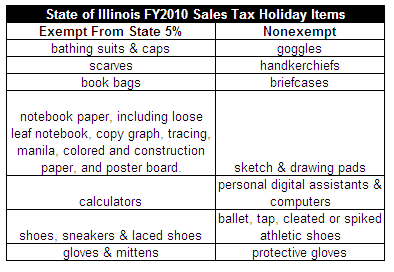 In addition, all of the exempt items purchased must be valued under $100 and supplies “must be used by students in the course of study,” according to the law. It is left up to retailers to determine if a consumer is buying an item for a student or for other purposes at the point of sale.