Congress appears to have sealed the fate of the federal Build America Bond (BAB) subsidy by not including renewal of the program in the package of unemployment benefits and tax incentives authorized last week. Now with less than two weeks left before the program is set to expire on December 31, 2010, many governments are rushing to market with last minute bond sales to take advantage of the hefty federal subsidy.

Originally enacted as part of the American Recovery and Reinvestment Act (ARRA) of 2009, the program provides federal assistance totaling 35% of the total interest cost of qualified capital purpose bonds sold by state and local governments in the municipal bond market. BABs were the largest of seven different bonding provisions of the recovery act and caused a dramatic increase in the amount of taxable bonds sold by states and other local governments over the last two years. A recent Bond Buyer article comparing taxable and tax-exempt municipal bond sales in the month of December for 2006 to 2010 showed that taxable bond sales grew from only 10% of the total offerings to 52% in that period. December usually averages more than $30 billion in municipal bond sales each year. Prior to the availability of the BABs subsidy, government issuers would primarily sell tax-exempt bonds that despite low yields would attract buyers due to the proceeds being exempt from federal taxes. Taxable bonds typically have higher yields and total interest cost than tax-exempt bonds, but under the 35% BAB subsidy the total net cost for the issuing entity has been lower for taxable bonds since 2009.

More than $184 billion in BABs have been issued by state and local governments nationally since the first offerings went to market in April 2009.

Illinois sold a total of $3.3 billion in qualified BABs through six issuances between January and July of this year. The total gross interest of $2.8 billion over the 25-year term of the bonds will be reduced by an anticipated $965.5 million in federal BAB subsidies. The following chart shows the principal, interest and subsidy for all of the BABs issued by the State of Illinois.

These bond sales are part of the $31-billion Illinois Jobs Now! capital spending program also first authorized in the spring of 2009. The new appropriations in the capital bills are almost entirely debt funded and new bond sales are expected to total at least $15 billion over the next five years.

The additional cost of these bonds due to the structure, as well as Illinois’ very low bond rating and ongoing fiscal crisis, were analyzed at length in the Civic Federation’s Cost of the Crisis report published on August 30, 2010.

The following chart shows the $965.5 million in total BAB subsidies expected by Illinois, spread over the 25-year term of all the qualified debt issued by the State under the program. 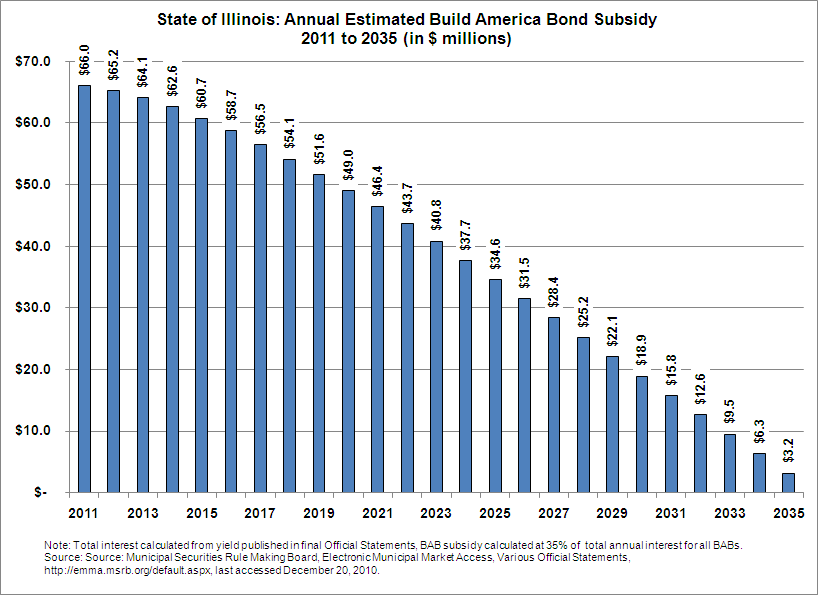 Although the bonds sold by Illinois all qualify for the estimated subsidies above, the Internal Revenue Service has begun auditing issuances to look at pricing, the buyers of the bonds and how the proceeds are being spent. Some of the concerns are that issuers paid broker fees that were too high, agreed to unjustifiably high yields or that their own pension funds purchased the bonds. Illinois has not been listed as one of the issuers under scrutiny; however, the Metropolitan Water Reclamation District of Chicago announced this fall that the IRS was looking into its August 2009 issuance of $600 million in BABs.

As previously discussed on this blog, the IRS will be keeping an eye on governments that have issued the bonds and owe the federal government money that could be recouped by offsetting expected BAB payments.