The Illinois General Assembly’s Commission on Government Forecasting and Accountability (COGFA) began holding public hearings on October 5, 2011 on Governor Quinn’s proposal to close seven state facilities. COGFA is required under the State Facilities Closure Act (30 ILCS 608) to hold public hearings on the proposed closing of prisons, youth centers and centers for the mentally ill and developmentally disabled. The Act also requires COGFA to issue an advisory opinion on each proposed closure.

As previously discussed here, the Governor has proposed closing the seven facilities and laying off more than 1,900 employees due to inadequate funding by the General Assembly in the FY2012 budget. The closings would begin in November 2011 and be completed by March 2012, according to a tentative schedule released by the Governor’s Office. The chart below shows the facilities scheduled for closure, proposed closing dates, population, employees and annualized cost of operation.

Governor Quinn expects to save approximately $45.0 million in FY2012 by closing the seven facilities. As shown in the next chart, the Governor’s Office provided a combined savings estimate for the three mental health centers and for the two developmental disabilities centers, rather than estimates for individual centers. 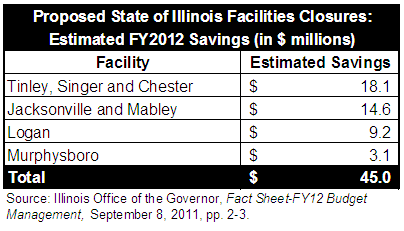 Questions remain about the proposed timetable for the closures, the projected savings and the State’s ability to relocate residents and inmates. It is also unclear whether the Governor would agree to keep at least some of the facilities open if the General Assembly upholds his vetoes of $367 million in FY2012 appropriations.

COGFA has 35 days after an agency that oversees a facility files a recommendation for closure to hold a public hearing and 50 days to issue an advisory opinion. Recommendations relating to the facilities were filed in September and hearings have been scheduled in October 2011 for six of the affected facilities. The first hearing, regarding the Singer Mental Health Center, took place in Rockford on October 5.

Hearings on closing the Tinley Park Mental Health Center were held in 2008 and 2009, and COGFA voted to accept the recommendation to close the facility in April 2009. Advocates for the mentally ill have requested another hearing on the Tinley Park center, arguing that the current plan provides no replacement facility, unlike the proposal considered previously.

In filings with COGFA, the Departments of Human Services (DHS) and Corrections have expressed concerns about the transfer of residents and inmates to other locations as a result of the closings. For example, DHS said here and here that roughly 87% of the residents at the two centers for the developmentally disabled will be moved to community settings. However, DHS noted that it is concerned about sufficient and appropriate community capacity. The Department of Corrections said that many Logan inmates would have to be housed in gyms at other correctional facilities.

DHS also raised questions about net savings relating to the mental health and developmental disabilities facilities closures, after closing costs and transitional assistance expenses. The agency said a deficit of $34.4 million would remain in its budget after the closings of the developmental disabilities centers and a deficit of $37.9 million after the closings of the mental health centers.

Public reaction to the Governor’s proposal has been mixed. The Arc of Illinois, an advocacy group for the developmentally disabled that has long favored phasing out institutional care, has strongly supported the proposal. Advocates for the mentally ill and a prison watchdog group have expressed reservations about the State’s ability to provide suitable alternative locations for displaced residents and inmates.

On October 3, an arbitrator ruled that the closings would violate Governor Quinn’s agreement with Council 31 of the American Federation of State, County and Municipal Employees not to shut down any state facilities or lay off workers prior to July 1, 2012. The Governor’s Office plans to appeal the ruling. The arbitrator said he was limited to interpreting the State’s contractual obligations and could not evaluate the Constitutional and statutory issues raised by the Governor’s contention that he was left with no other options due to the legislature’s failure to provide adequate funding.