Two months after the start of the State of Illinois’ 2012 fiscal year on July 1, 2011, Governor Pat Quinn has proposed the closure of seven state facilities and the layoff of more than 1,900 employees in order to cope with a funding shortfall for certain agencies in the budget passed by the General Assembly.

At a press conference on September 8, 2011, the Governor said he plans to close a prison, a juvenile boot camp, three mental health institutions and two institutions for the developmentally disabled. Those closures, along with other reductions, would eliminate 1,938 jobs and save roughly $55 million in FY2012.

As required under the State Facilities Closure Act (30 ILCS 608), the legislature’s Commission on Government Forecasting and Accountability (COGFA) was notified of the intended closures. COGFA must hold at least one public hearing and issue an advisory opinion on the Governor’s proposal in approximately three months.

However, the Governor said that the General Assembly could avert the closures and layoffs by upholding his veto of $376 million in appropriations in the legislature’s $29.6 billion general operating budget. Governor Quinn said lawmakers could then approve supplemental appropriations to keep the facilities open and employees on the job, while not increasing the total expenditures for FY2012 originally authorized by the General Assembly.

The Governor’s announcement on September 8 was the latest indication of underfunding in the FY2012 budget. On July 1, 2011, a day after signing the FY2012 budget, Governor Quinn cancelled union pay raises due to inadequate appropriations by the General Assembly. The action, affecting approximately 30,000 members of Council 31 of the American Federation of State, County and Municipal Employees (AFSCME) led to a legal dispute between the union and the State. On September 7, 2011, a federal judge in Springfield dismissed AFSCME’s lawsuit against the State, ruling that cancelling the raise did not impair the union’s contract. AFSCME plans to appeal the decision.

Total savings from cancelling the raises ($76 million) and closing the facilities ($55 million) is estimated at $131 million. However, the State faces a total FY2012 departmental budget shortfall, including payroll and facility operating costs, of $314 million, meaning that a gap of $183 million remains to be addressed.

The disputed pay raise of 2%, due to take effect on July 1, 2011, was agreed to by AFSCME as part of negotiated changes in a contract that runs from FY2009 through FY2012. The agreement came after Governor Quinn proposed 2,600 layoffs and the union won a preliminary injunction in state court blocking the action. In exchange for deferral of raises and other concessions by the union, the State agreed not to lay off workers or close state facilities through June 30, 2012. The Governor’s plans announced on September 8 would breach that agreement.

Even after the cancellation of union pay raises, the FY2012 budget does not cover state salary costs. General Funds appropriations enacted in FY2012 for salaries in agencies under the Governor remain virtually unchanged from FY2011 at $2.3 billion. As shown in the chart below, Governor Quinn had recommended appropriations of $2.5 billion, an increase of 10.8%.

The next table compares payroll numbers, before and after scheduled raises, with FY2012 salary appropriations for the 14 agencies. 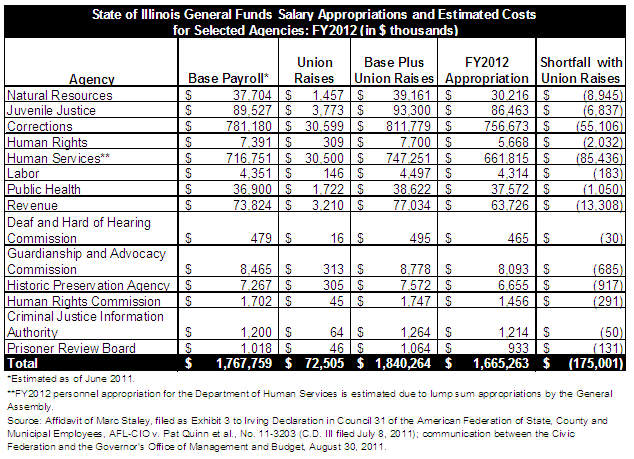 As previously discussed here, the FY2012 Medicaid budget passed by the General Assembly underfunded annual Medicaid costs by roughly $1.4 billion, meaning that payment of bills to medical services providers would be delayed as much as 120 days. Most of the Governor’s $376 million in vetoes involve Medicaid payments to hospitals and could further delay payment of bills unless the legislature agrees to reduce reimbursement rates for hospitals.