UPDATE: Subsequent to the publication of this blog, House Bill 777 was amended to include provisions of the City’s proposal to extend the amortization of its Police and Fire pension funding through 2055 instead of 2040 as under current law. The legislation includes a 90% target for the systems’ funding ratios and a five-year ramp of lower payments leading into the new contribution schedule.

Proposals for casino gaming expansion in Illinois have circulated throughout the spring legislative session as a possible remedy to the State’s financial crisis or the City of Chicago’s surging pension costs.

However, a closer look at current gaming revenue in Illinois shows that the magnitude of these problems far outpace the potential revenues that might be generated by adding additional casinos and allowing the City or State to own and operate a Chicago-based casino.

As discussed here, the State of Illinois faces a budget gap in the coming fiscal year totaling $6.2 billion, according to the Governor’s recommended FY2016 budget. Although the budget proposed by the Governor closes this gap through significant cuts to expenditures, the Civic Federation’s analysis of the budget identified at least $4.0 billion of savings in the spending plan that were unachievable or imprudent. The State also is expected to have a backlog of unpaid bills totaling more than $6.0 billion at the end of the current fiscal year.

Meanwhile, the City of Chicago has yet to announce a plan to pay for an increase in its police and fire pension payments next year that will total $549 million. It also now faces hundreds of millions of dollars in increased debt costs due to a series of bond rating downgrades.

The annual tax revenues produced by gaming in Illinois pale in comparison to these costs. Currently the State has a total of 10 casinos each approved to run 1,200 gaming positions. There are six race tracks in Illinois and the State receives funds from the State lottery to pay for education and capital construction projects. The State capital budget also receives funding from statewide video poker that was legalized in 2009 as the largest funding source for the Illinois Jobs Now! capital spending plan.

The Illinois Gaming Board began issuing video gaming licenses in 2012, which allow bars, restaurants, truck stops and benevolent associations to host up to five video gaming machines. According to the Board’s online records, the number of machines in Illinois now exceeds 19,000 terminals located at 4,785 establishments.

From all gaming sources combined, the State of Illinois received a total of $1.2 billion in FY2014. The largest portion of this funding came from the lottery, which received $816 million or 64.8% of the total.

The following chart shows the total tax revenue generated by gaming in Illinois by source from FY1992 through FY2014. 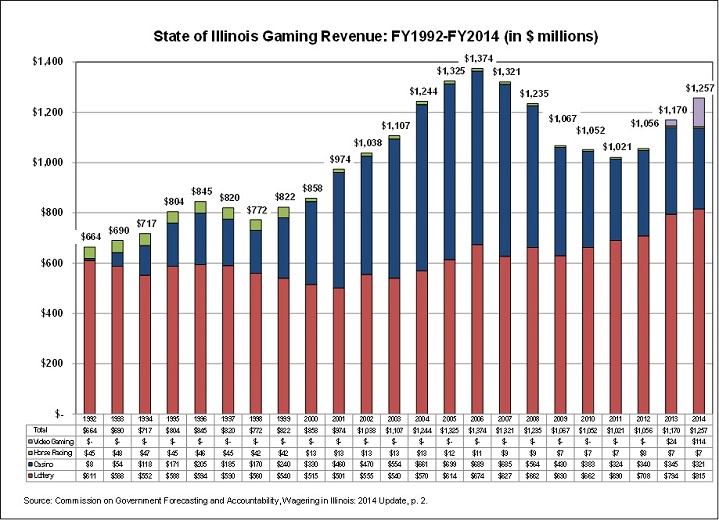 As mentioned above, not all of the gaming revenue collected by the State is available for operating spending. The State capped the amount of the Illinois lottery proceeds that are used for the General Funds budget when it approved leasing the management of the lottery to a private firm in 2009 as another part of the capital program revenues associated with Illinois Jobs Now!

The following table shows the amount of General Funds gaming revenues, excluding video gaming and other sources outside the operating budget, and the percentage of State-source revenues that come from these sources.

As shown in the table above, the total tax revenue generated by all 10 casinos in Illinois is expected to total $290 million in FY2016. This is a decline of $395 million from the FY2007 total of $685 million. The State had experienced an increase in revenues from casino gaming in FY2012 when the tenth casino location in Illinois opened in Des Plaines. However, largely due to the pressure from the expansion of video gaming, casino revenues began to decline again in FY2013 and are projected to continue this slide through FY2016, according to an analysis by the Commission on Government Forecasting and Accountability. The adjusted gross revenue of casinos in Illinois are taxed on a graduated scale ranging from 15% for revenues under $25 million up to 50% for revenues over $200 million.

Only the new Des Plaines casino received enough revenue in 2014 to qualify for the top gaming tax rate, with adjusted gross receipts of $425.5 million.

Two separate bills that would expand gaming have been considered in the General Assembly earlier this spring, but after subject matter hearings the bills have been held in committee and not taken up for a vote.

House Bill 2939 only includes one new casino license in the City of Chicago that would be owned by the State of Illinois and managed by a private operator.  The bill includes the following provisions:

Similar to previous proposals that would have allowed the City of Chicago to own and operate its own casino, State ownership would increase the potential revenue beyond the graduated tax rate that is currently charged on the adjusted gross receipts for each location. Other casinos in the State are privately owned and pay 5.0% of their adjusted gross revenue to the local governments where they are located.

Although there is no comparably sized casino in Illinois as the Chicago location included in HB2939, the Illinois Gaming Board reported that in 2014 all of the 10 casinos, with more than 11,000 gaming positions produced $1.4 billion in adjusted gross revenues.  The Commission on Government Forecasting and Accountability estimates that in 2014 the five casinos in Indiana and Michigan that would compete with a new Chicago location, generated a total of $975 million.

Based on these revenue totals and the division of the revenues as proposed in HB2939, even a 10,000 seat casino seems unlikely to produce enough revenue to cover the City of Chicago’s anticipated increase in pension cost and would cover only a small portion of the State’s budget gap and unpaid bills. The additional competition in the market would also likely reduce tax revenues generated by the other Illinois casino.

The revenues to the City of Chicago would likely be lower with this proposal because the limit on the number of gaming positions is lower than HB2939. It is also unclear how State revenues would fare considering the large number of positions spread across the State and how competition between expanded gaming at the racetracks, five new casinos and the existing 10 casinos and video gaming terminals would play out.

Recent bond disclosures by the City of Chicago stated that revenues from a new casino would only be part of their plan to cope with its rising pension costs. The City is also seeking to reduce its payments by extending the amortization period for its pension funds, increasing total cost but lowering the annual amounts due and including a “ramp” to a higher level of payment.

It should also be noted that some license fees and possible payments from a private management company may be available as significant one-time revenues from gaming expansion but would not sustainably address the City or State’s ongoing financial needs.