On August 17, 2012, Illinois legislators adjourned a special one-day session of the General Assembly without taking action on the State’s pension crisis. Due to the stalled effort, the State continues to face pension costs that will consume an increasing share of its resources over the next two decades.

The chart below compares total pension costs—including State contributions and payments on pension bonds—with State-source general operating revenue. The share of revenue used for pension costs has risen from 3.6% in FY1996 to 22.0% in FY2013. The costs peak at 28.1% in FY2031 and level off at 23.0% in FY2045, the last year of the State’s existing pension-funding schedule. 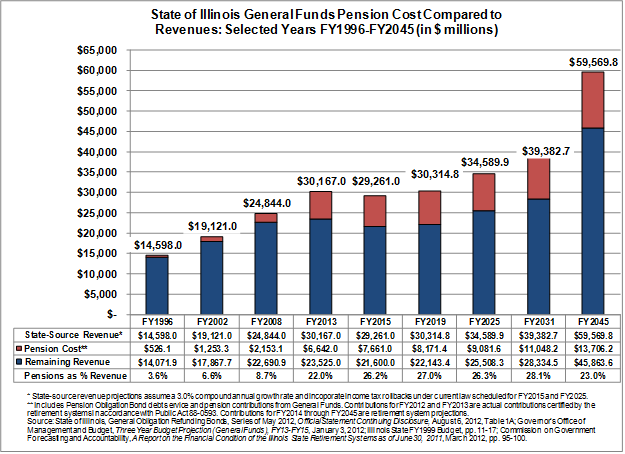 State-source General Funds revenue includes State taxes and fees and revenue from sources such as the Illinois lottery but excludes federal revenue that is mainly related to reimbursements for State Medicaid spending. In order to project future revenues, the chart above assumes a compound annual growth rate of 3%. It also assumes that income tax rate rollbacks scheduled for January 1, 2015 and January 1, 2025 take place as enacted.

It is interesting to note that the share of revenue devoted to pensions decreases significantly after FY2033, when all outstanding pension bonds have been retired. In FY2003 Illinois sold $10 billion of 30-year pension bonds, of which $7.3 billion was used to reduce unfunded liabilities and other proceeds were used to pay part of the FY2003 State contribution and all of the FY2004 State contribution. The State also issued $3.5 billion of five-year bonds in FY2010 and $3.7 billion of eight-year bonds in FY2011 to make its annual General Funds pension contributions. 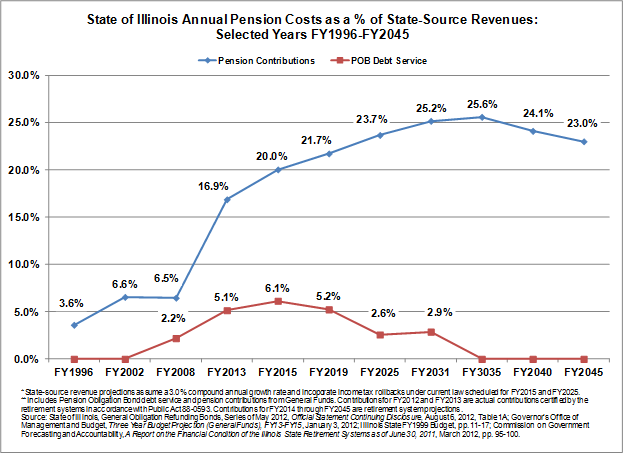 The State makes contributions to its five retirement systems under a statutory funding plan that began in FY1996. After a 15-year phase in period, the 50-year plan requires State contributions at a level percentage of payroll sufficient to achieve 90% funding by FY2045.

Although the State borrowed to pay its required contributions in FY2010 and FY2011, the contributions have been paid out of General Funds for the past two years. This has created a strain on other parts of the budget. The enacted budget for FY2013, which began on July 1, calls for $1.6 billion in cuts to the State’s Medicaid program and $827 million in other reductions in agency appropriations.

The FY2013 General Funds pension contributions are $5.1 billion and projected FY2014 contributions are approximately $5.6 billion. The FY2014 number could increase significantly if the State’s largest retirement system, the Teachers’ Retirement System (TRS), decides to reduce its assumed rate of return on investments. This rate, also known as the discount rate, is used to calculate the present value of the future obligations of the systems. Reducing the rate increases the present value of future commitments to employees and retirees and results in higher statutorily required State contributions.

The State’s other four pension systems lowered their discount rates in FY2010 and FY2011 to between 7.0% and 7.75%, but TRS has held its rate at 8.5%. The TRS Board of Trustees at a meeting on August 23, 2012 is expected to vote on a series of recommendations by the system’s actuaries that may include a reduction in the discount rate. The recommendations are included in an actuarial experience review required every five years for each retirement system by the Illinois Pension Code.